Hyderabad, Apr 1: All India Majlis-e-Ittehadul Muslimeen (AIMIM) leader Asad Khan, 40, was hacked to death on a busy road in broad daylight in Hyderabad on Thursday.

The incident took place in the Vattapally area under the Mailardevpally police station in Old City, Hyderabad. It is a region that is considered to be the bastion of AIMIM chief Asaduddin Owaisi. The assailants were not immediately identified.

Police say Asad Khan, a local AIMIM leader, had a criminal past and they suspect this is case of "revenge killing".

The cops have started investigating the matter and are collecting evidence to arrest the criminals.

Sources say Asad Khan was attached when he was riding his two-wheeler. A group of assailants attacked him with sharp-edged weapons near a public hall on Shastripuram Road. After stabbing him to death in broad day light, the assailants fled the spot.

Asad Khan was rushed to Osmania Hospital where he was declared brought dead.

In the past, Asad Khan was arrested in a murder case and was also facing several other criminal cases. 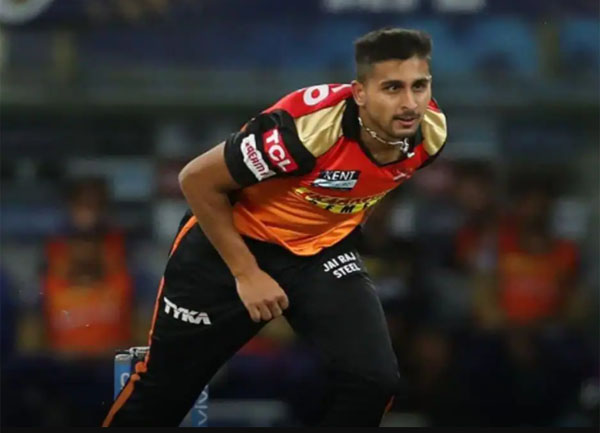 Abu Dhabi: Mighty impressed with pace sensation Umran Malik, who sent down the IPL's fastest delivery against his franchise, India captain Virat Kohli said the Jammu and Kashmir youngster's growth needs to be monitored to ensure his potential is maximised.

The 21-year-old from Jammu has got everyone excited with his raw pace and clocked 152.95 kph during the game against Royal Challengers Bangalore here on Wednesday. Kohli was paying attention and was quite excited by what he saw.

"This tournament throws up talent every year, good to see a guy bowling at 150 clicks. It is important to understand the progress of individuals from here on," Kohli said in the post-match presentation after his team lost the game by four runs.

"The pool of fast bowlers being strong is always a good sign for Indian cricket and whenever you see talent like this, you are going to have your eyes on them and make sure you maximise their potential which is already being seen at the IPL level," he added.

Umran's IPL debut was against Kolkata Knight Riders and he clocked 151.03 kmph, which was at that time the fastest delivery by an Indian this season. His 152.95 kmph zinger last night made him the fastest of the IPL, surpassing Lockie Ferguson (152.75 kmph).

SRH skipper Kane Williamson counted him as one of the positives of a largely disappointing season for his team.

"Umran certainly is special. We've seen him in the nets for a couple of seasons. Special opportunity for him and it's not surprising to see him come and do well. (He has) Been a really valuable addition to the side," said Williamson.

"I try and keep it really simple with him but he's got a lot of mates in the team and they share the message and he takes the game on," he added.

The youngster has risen through the ranks despite humble beginnings. His father owns a small fruit shop in Jammu's Gujjar Nagar area.

On his T20 debut, he picked up 3/24 against Railways which included the wicket of former India player Karn Sharma, who was beaten for sheer pace.

Chandigarh, Oct 5: Punjab Chief Minister Charanjit Singh Channi on Tuesday said he will meet Union Home Minister Amit Shah in the evening and will raise with him the Lakhimpur Kheri incident.

Channi, who along with some ministers and Congress legislators held a silent protest at Gandhi Smarak Bhawan here, said the violence in Lakhimpur Kheri reminds him of the 1919 Jallianwala Bagh tragedy.

Eight people died and several others were injured on Sunday in the bloodiest clash since the farmers' protest over the Centre's agri laws began last year.

Four of the dead were farmers, allegedly knocked down by vehicles driven by BJP workers travelling to welcome Uttar Pradesh Deputy Chief Minister Keshav Prasad Maurya to an event in the area.

The others were BJP workers and their driver who were allegedly pulled out of the vehicles and lynched. Two cars were set on fire.

Channi alleged that the “killing” of the farmers was “intentional”.

He said he will be meeting the Union home minister at 6.30 pm and will raise the issue of the Lakhimpur Kheri incident with him.

Slamming the BJP government at the Centre, he said it should not force the country's youth to look at martyrs like Bhagat Singh, Rajguru, Sukhdev and Shahid Udham Singh for again “restoring” democracy in the country.

Channi said the Lakhimpur Kheri incident was “painful” and demanded that the three controversial farm laws should be repealed immediately.

“The way an SUV mows down peaceful farmers from behind and kills them and all this which happened was intentional,” Channi alleged, apparently referring to a video clip purportedly showing an SUV mowing down farmers in Lakhimpur Kheri.

He alleged that a BJP leader had earlier told farmers that they would not be spared. “And then they (farmers) were killed intentionally. It was brutal.”

He said the incident reminded of the Jallianwala Bagh tragedy wherein General Dyer had ordered his troops to fire at peaceful civilians.

“Today, the same has been done with the farmers,” he added.

“It is necessary to recognise the voice of people. The governments in democracy should work according to the will of the people,” Channi said.

“Today farmers are upset and they are dying. Considering this, these (farm) laws should be repealed immediately,” he said.

He said incidents like in Lakhimpur Kheri should be stopped.

“(Narendra) Modi ji should stop his BJP people and the RSS. It will not work in the country,” he said.

On the issue of detention of Congress general secretary Priyanka Gandhi Vadra in Uttar Pradesh, Channi said, “This is too much. It is unacceptable.”

“Today, the blood of all the countrymen is boiling,” he said.

All you need to know about Mosquirix, the 1st malaria vaccine endorsed by WHO

The World Health Organization (WHO) has endorsed Mosquirix, the RTS,S/AS01 malaria vaccine — the first and the only till date — against the mosquito-borne disease that kills more than 400,000 people a year, mostly African children.

The vaccine acts against plasmodium falciparum -- one of five malaria parasite species and the most deadly, most prevalent in Africa. The vaccine’s trial data showed that it could prevent 4 out of 10 malaria cases over a period of four years, when four doses were administered to children. Mosquirix is the first malaria vaccine which has finished its clinical development process.

Mosquirix, is not just a first for malaria; it is the first developed for any parasitic disease. Parasites are much more complex than viruses or bacteria, and the quest for a malaria vaccine has been underway for 100 years.

WHO’s approval followed a review of a pilot programme deployed since 2019 in Ghana, Kenya and Malawi in which more than two million doses were given of the vaccine, first made by the pharmaceutical company GSK in 1987.

In clinical trials, the vaccine had an efficacy of about 50 per cent against severe malaria in the first year, but the figure dropped close to zero by the fourth year. And the trials did not directly measure the vaccine’s impact on deaths, which has led some experts to question whether it is a worthwhile investment in countries with countless other intractable problems.

Malaria research is littered with vaccine candidates that never made it past clinical trials. Bed nets, the most widespread preventive measure, cut malaria deaths in children younger than 5 by only about 20%.

Against that backdrop, the new vaccine, even with modest efficacy, is the best new development in the fight against the disease in decades, some experts said.

How malaria affects the world

Malaria is a life-threatening disease caused by parasites that are transmitted to people through the bites of infected female Anopheles mosquitoes.

African regions carry a disproportionately high share of the global malaria burden. In 2019, the region was home to 94% of malaria cases and deaths.

How to use the vaccine

WHO has recommended that in the context of comprehensive malaria control, Mosquirix be used for the prevention of P. falciparum malaria in children living in regions with moderate to high transmission. Mosquirix is to be given in three doses between ages 5 and 17 months, and a fourth dose roughly 18 months later.

Funds for the programme were mobilised through Gavi, the Vaccine Alliance; the Global Fund to Fight AIDS, Tuberculosis and Malaria; and Unitaid, according to WHO.

The Bill & Melinda Gates Foundation provided catalytic funding for late-stage development of RTS,S between 2001 and 2015.

Germany's BioNTech, which developed a coronavirus vaccine with US giant Pfizer, also said it aimed to start trials for a malaria vaccine next year using the same breakthrough mRNA technology.

The WHO also hopes this latest recommendation will encourage scientists to develop more malaria vaccines.