Malappuram, Jan 18: In a shocking revelation, a 17-year-rape survivor here has disclosed that she had been allegedly sexually abused by 38 people during the past few months. The teenager's ordeal came to light during a counselling session at a Nirbhaya centre recently, police said.

The minor girl had been sexually abused in 2016 when she was 13 and then a year later. After the second incident, she was sent to the Child Home and allowed to go with her mother and brother about a year ago.

According to Mohammed Haneefa, Circle Inspector of Police, the girl was missing for sometime after she was released from Child Home and was traced from Palakkad in December last and brought to the Nirbhaya centre.

During counselling sessions, she informed the Nirbhaya authorities about the series of sexual abuses and molestation she had been exposed to.

Almost all the accused, who were charged with various crimes, including sexual abuse, have been arrested and remanded to judicial custody, the police officer told PTI.

The Malappuram CWC president Shajesh Bhasker said the CWC has taken all legal and logical steps to ensure the safety of the child, when she was released from the Child Home, about a year ago.

"The decision was taken by our five-member committee and in consultation with the Child Protection Officer. This was done in tune with the Juvenile Justice Act, which says institutionalising a POCSO survivor should be the last priority."

"They are supposed to be sent out with their parents to ensure their protection as well as enabling restoration to society," Shajesh Basker told PTI.

He said the CWC has been acting with utmost good faith and intentions. But there are some flaws in the after-care and follow up of POCSO survivors once they are released in the custody of their parents or relatives, who undertake to protect them, he said.

The Child Welfare Committee (CWC) is the statutory body for ensuring the rights and addressing the needs of the children in need of care and protection.

CWCs have been empowered as the competent authority to take reasoned decisions in the matter of children in need of care and protection.

AFSPA extended for 6 months in Assam by BJP-led govt 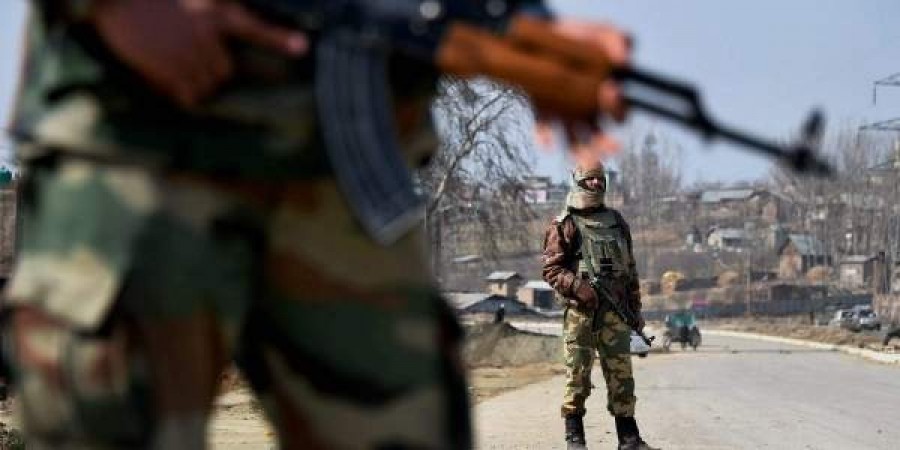 Dispur, Feb 25: Months before the Assembly polls, the Bharatiya Janata Party-led government in Assam on Wednesday extended the Armed Forces (Special Powers) Act, 1958 (AFSPA), in the state for six more months beyond February 27, an official said.

An Assam Home Department official said that the AFSPA has been extended considering the ground situation in Assam and adjoining northeastern states. Various political parties, organisations and civil society groups and activists have been demanding the removal of the "draconian law" from the northeastern states.

The AFSPA, which allows the Army and other paramilitary forces to conduct raids, and arrest anyone anywhere without prior notice or arrest warrant, has been in force in Assam since November 1990.

Security agencies and senior officials review the situation every six months to decide on its extension.

The AFSPA is also in force in entire Nagaland, certain districts of Arunachal Pradesh and most parts of Manipur barring the Imphal municipal areas.

Terming the AFSPA as a "draconian law", renowned human rights activist Irom Chanu Sharmila of Manipur had fought for 16 long years till mid 2016, demanding its repeal.

Tripura is the only state in the northeast region where the AFSPA was withdrawn by the then Left Front government led by Communist Party of India-Marxist veteran and Chief Minister Manik Sarkar in 1998 after terror activities were tamed. 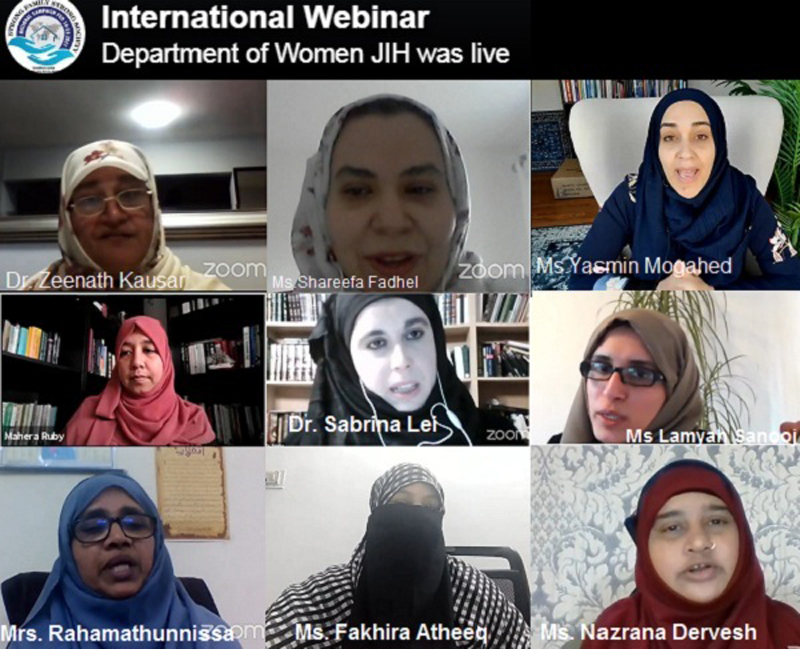 New Delhi, Feb 24. 2021: Muslim women intellectuals and scholars from around the world have unanimously given a clarion call to adopt Islamic teachings for nurturing a happy family and a stronger society.

They were speaking at an international webinar on the central theme of the ongoing 10-day campaign `Strong Family, Strong Society’, organized by the Department of Women, Jamaat-e-Islami Hind (JIH).  The campaign is being conducted from 19 Feb. to 28 Feb. 2021.

Renowned Malaysian educator and scholar Dr. Zeenath Kausar expressing her views on the topic ‘Present Scenario of Families across the World’, said, “now there are decreasing rates of marriage and increasing rates of divorces and emerging new non-conventional families including LGBTQ.  The root causes for them are the liberalism and feminist ideologies of the West. Now new liberal and radical thoughts, which are emerging from them, have direct evil implications on the institution of the family. One of them is absolute sexual and reproductive rights, which actually means separating sexuality and reproductive rights from marriage and the family. Secondly, in vitro fertilization, surrogate mothering and several other technologies which are exploited by non-marital reproduction components. For that reason they have created avenues for non-marital families and adultery.” She has underlined that family is the primary institution from which all other institutions emerge. “If there is no family, there will be no institution and no institution means no society. If there is no society, there will be a jungle of wild forest of unorganized human beings. Family is the first university which teaches us values of love, care and sacrifice,” she added.

An Arab female entrepreneur and scholar from Qatar Mrs.Shareefa Fadhel speaking on `Impact of Family Condition on Economic, Social and Political Scenario’, focused on the husband-wife responsibilities, distribution of works, home economics and housekeeping.  Calling households just like small firms and businesses, she said that they played a main role in social production as well as a large role in the development of the country and the economy. She called for recognizing the value of domestic work, mother, and the extended family. “Teach your children the basic economics. It includes roles and responsibilities, planning, teamwork, savings and investments, and creating a reward system. Women have an important role. If you are a woman, take care. You are an important brick of society like a man. Marriage is the binding and joining of two parties beyond two people. It is between two families and two communities. A new brick is laid with every new formation of a family and that is an integral part of society,” she added.

Expert on the family issues, Dr. Mahera Rubey, from the United Kingdom, talking on ‘Building bond between husband and wife’, stressed upon developing the attitude of Gratitude. She cited various verses from the holy Quran and sayings of Prophet Mohammad (PBUH) for strengthening the conjugal relationships. She quoted the Quran, which says, ‘Another of His signs is that He created spouses from among yourselves for you to live with in tranquillity: He ordained love and kindness between you.’  Citing the Prophet quotation, she has explained that love and security are the two essentials, which a spouse needs from the partner. The Prophet said, “the best of you is the one who is best to his wife and I am the best of you to my wives.”

Noted woman Muslim scholar from Italy Dr. Sabrina Lei, presenting her views on the topic `Family Life Supports and Safeguards Spiritual and Moral Aspects of Life’, has thanked Jamaat-e-Islami Hind for conducting the campaign on a theme, which is not only important for the Muslim community but for the future of the world. She said, “India is known for tolerance and harmony. I pray to Allah for strengthening peace, justice and harmony in the country. They are also required for nurturing a family system, for which Islam teaches us.”

Concluding the webinar, the Campaign in-charge and Co-secretary of Jamaat-e-Islami Hind Mrs.Rahamathunnissa, said, “if you want to maintain a good relationship, let us focus on the good aspects of the people. Islam teaches us a very practical, simple and natural system of the family life. Let us adopt it and learn more about it. We become more spiritual and complete our faith by getting married. So, my advice to youngsters is to get married without delay. The basic idea of the family system, why Islam has given it importance, is because every person’s basic need is fulfilled in it. That is why it is considered worship in Islam. In the name of liberty, people abandon families and values. In that process they ironically get enslaved and trapped in unwanted relationships and drug addicts. Initially, you get attracted. In the long run, when you lose charm, beauty, and health you realize what went wrong.”

Ms. Fakhira Atheeq, Assistant Secretary of JIH Women’s department proposed a vote of thanks to the speakers, the participants and the hosts. 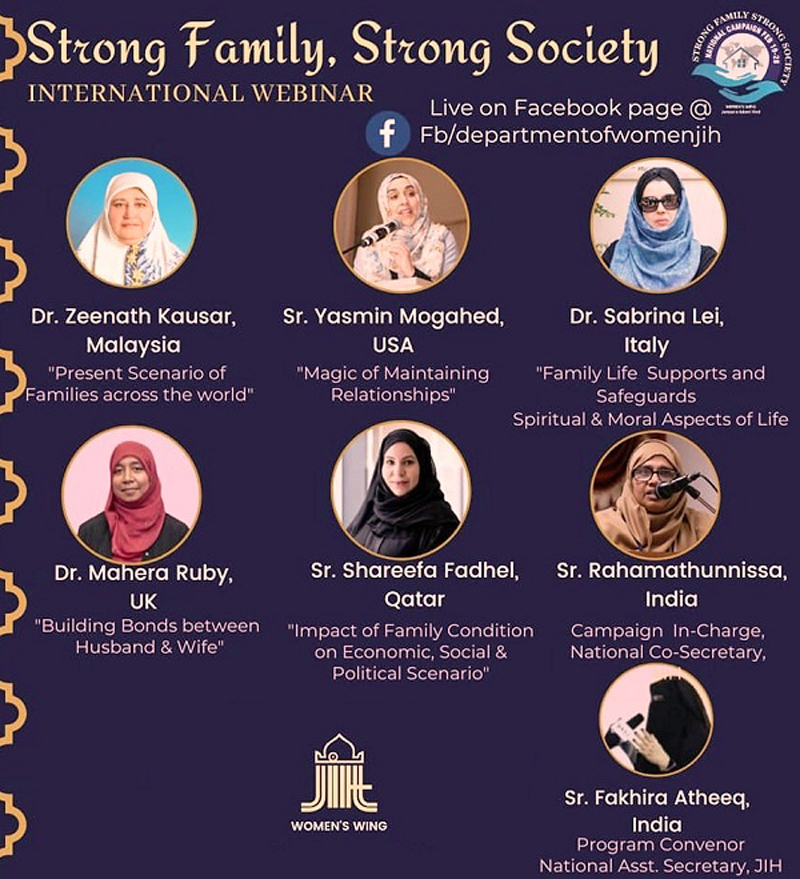 Unnao, Feb 18: The bodies of two minor Dalit girls were found in a field here on Wednesday, police said.

Three minor girls were found in the field in the evening by the villagers when they did not return after they left their house to bring fodder for the cattle, they said.

The hands and feet of the girls were tied with their dupatta and they were frothing at the mouth, sources said.

The villagers informed the police and rushed the girls to a hospital, where two of them were declared brought dead while one was taken to the Unnao hospital for treatment, they said.

Superintendent of Police Anand Kulkarni, who reached the spot, said that the two girls have died while the other one has been admitted to a hospital.

The bodies of the victims have been sent for postmortem and an investigation is underway, police said.