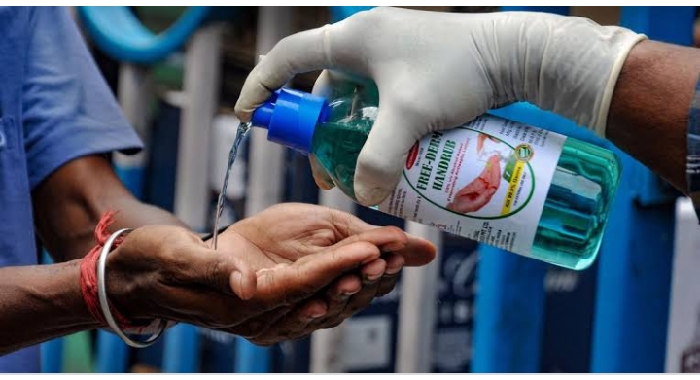 Prakasam district Superintendent of Police Siddharth Kaushal said the people had been consuming sanitiser for the past few days, mixing it with water and soft drinks.

"We are also investigating whether they laced the sanitiser with any other toxic substances," the official said.

"Their family members say these people have been consuming sanitiser for the past ten days. We are sending the sanitiser stocks, being sold in the area, for examination," he added.

Kurichedu in Prakasam district has been under lockdown due to rise in coronavirus cases and hence, liquor shops have also been shut since the past few days.

Habitual drinkers were said to be consuming sanitisers that have alcohol content, apart from illicitly distilled arrack.

The police said two beggars near a temple were the first to fall victim on Thursday night. While one of them was found dead at the spot, another died in the government hospital in Darsi town, they said.

A third person was also taken to the Darsi hospital late on Thursday night after he fell unconscious but he was declared brought dead. Six others who fell ill after allegedly consuming sanitiser, died this morning.

Others who fell ill after consuming sanitiser are undergoing treatment at their residences in the village, the police added.

Alappuzha, Sept 15: The body of a two-and-half-year-old boy Adikrishna, who went missing at Alappuzha beach after waves swept him away while his mother was clicking a selfie with him, was recovered from the sea on Tuesday.

According to the Alappuzha police, the tragic incident took place on Sunday evening when Adikrishna came to see the beach in Alappuzha district along with his parents and other relatives.

On Sunday, following the rains, the sea turned rough and the family was experiencing the sea and the toddler was held by his mother.

When a selfie was taken a huge wave came up and she lost control of her kid, which fell into the waters.

While she quickly regained control and managed to save two kids, Adikrishna was taken away by the sea.

On Tuesday early morning , the body was recovered and following the inquest the body will be handed over and the last rites will be conducted later in the day.

The couple hails from Palakkad and had come to Adikrishna's mother's place at Thrissur for a wedding and it was from there they drove to AlappuzhaA to visit their relative.

Forest officials said that the arrested persons have been identified as Manu and Manju.

On a tip-off, the forest officials raided near annachouka forest range area where the accused were trying to sell the meat.

The officials said they have seized deer meat, one single baron gun while two other accused were escaped.

A case has been registered under the Wildlife Act.

Kalaburagi, Sept 27: Seven people, including a pregnant woman, were killed and two others seriously injured when a car in which they were travelling rammed into a standing transport lorry near Savalagi village of Kalaburagi district on Sunday morning.

According to the police, the deceased as well as injured belonged to a single-family and they were native of Aland taluk of Kalaburagi.

Police also said the deceased were on the way to the hospital for admitting the pregnant woman belonged to the family and the car in which they were travailing rammed to the roadside standing lorry near Savalagi village of Kalaburagi.

Injured were shifted to Kalaburagi government hospital and their condition was said to be serious, the source said.