Jayaprakash Hegde: A triumph of values in politics

The victory of K. Jayaprakash Hegde in the byelection for the Udupi-Chikmagalur parliamentary constituency has come as a tonic for the Congress which was reeling under a series of defeats since 2008 Assembly elections. The principal opposition party, which had won just one of the dozen by-elections held in the last four years, romped home by a margin of over 47,000 votes in the traditional BJP strong-hold goes on to prove the fact that the electorate are ready to give Congress a chance if they shun infighting and dissidence. Contrary to BJP, the Sonia Gandhi-led party got everything right in this election; from the selection of candidate to the campaigning, from media management to the choice of electoral issues.

Much has been said about the unblemished public image of Mr. Hegde, who comes across as a sincere, honest, approachable and down-to-earth politician unlike many of his colleagues in his own party and other parties. In fact Mr. Hegde is one of those rare breed of politicians who practices value-based politics ever since he made a foray into the political arena as the general secretary of youth Janata Dal in the late 80s. He was greatly influenced by the socialist philosophy of Jayaprakash Narayan and was an ardent fan of leaders like Ramakrishna Hegde and Nazeer Sab. He successfully contested the Assembly election in 1994 from Brahmawar and was made the Minister for ports and fisheries by the then Chief Minister H. D. Deve Gowda. 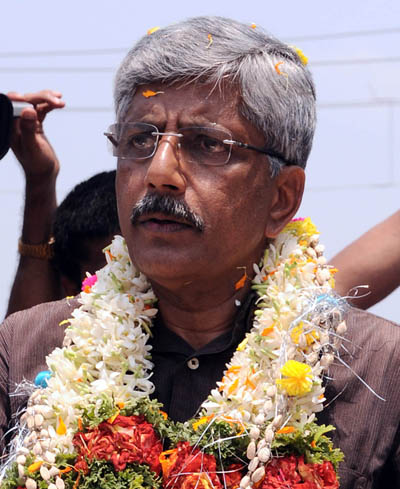 Mr. Hegde showed his administrative acumen by handling the portfolio quite efficiently and became one of the popular ministers in the cabinet. However, with Janta Dal getting bogged down by the internal feud and splitting into JD(S) and JD(U) led by Deve Gowda and J.H. Patel respectively, Mr Hegde had no choice but to chart his own course of action. He was one of the few politicians who could neither identify with Gowda nor with Patel and stayed as ‘neutral’ along with like-minded leaders like B.A. Mohidin and M.C. Nanaiah. But, unlike the two senior leaders, young Hegde had a support base of his own and could easily win the 1999 and 2004 elections as an independent candidate. Although he joined Congress subsequently, he did not lose his identity and self-respect unlike many others who get accustomed to the ‘jee-huzoor’ culture of the party. The change of constituency due to delimitation made Hegde taste his first defeat in 2008 Assembly elections from Kundapur, but the biggest setback was the defeat against Sadananda Gowda in the Lok Sabha election from Udupi-Chikmagalur held the following year.

Mr. Hegde’s victory also proves the point that even in an era where politics is riddled with caste equation, money and muscle power, the electorate do acknowledge honesty and sincerity. The results also show that the voters can be won over by articulating your ideas and dreams for the development of the constituency you seek to represent. Mr. Hegde was far ahead of his rival Sunil Kumar of the BJP when it came to connecting with the voters. Along with the personal credibility of Mr. Hegde, the series of blunders committed by the BJP leaders both locally and at the state level also worked to the advantage of the Congress. The rave party, the porngate fiasco, the allegations of corruption against a host of ministers including the former chief minister left the voters with no choice but to punish the BJP. Its stand on issues like United Power Corporation Limited (UPCL) and Special Economic Zone (SEZ) also made voters cynical about the politics of the saffron brigade.

The myth about JD(S) candidate eating into Congress votes has also proved wrong in this election with Bhoje Gowda securing a substantial chunk of votes in the Vokkaliga-belt in Chikmagalur district. The attempts by BJP to divide the voters on communal lines by undermining the value of Muslim and Christian votes also came back to bite the saffron party. The scant regard for the constitutional propriety, rule of law and the aspirations of the electorate reflected in the speech and action of top BJP leaders has been summarily spurned by the electorate. The victory also offers a ray of hope for the beleaguered Congress, who need to shun their difference and discover their core strength to present a viable alternative to the BJP, which is currently wilting under the burden of its own sins.