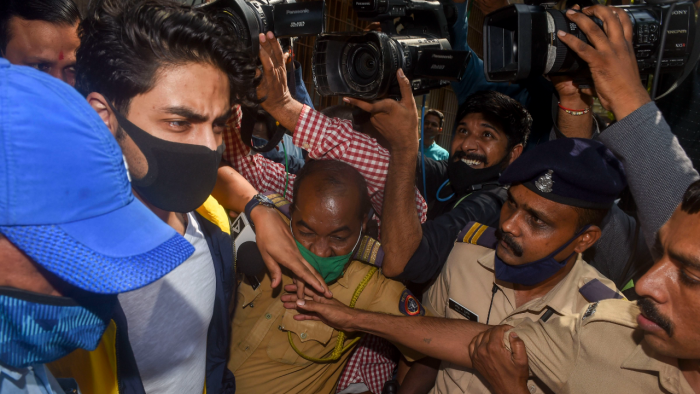 Soon after NCB's announcement, NCB Zonal Dir Sameer Wankhede told ANI that he has not been removed from the investigation but the case would be now probed by Delhi and Mumbai teams combined. "I've not been removed from the investigation. It was my writ petition in court that the matter is probed by a central agency. So Aryan case & Sameer Khan case are being probed by Delhi NCB's SIT. It's a coordination b/w NCB teams of Delhi & Mumbai," he said.

NCP chief spokesperson and Maharashtra minority affairs minister Nawab Malik, reacting to the transfer, said that this was just the beginning. He said, "Sameer Wankhede removed from 5 cases including the Aryan Khan case. There are 26 cases in all that needs to be probed. This is just the beginning... a lot more has to be done to clean this system and we will do it."

A total of 20 persons were arrested in the case including Bollywood superstar Shah Rukh Khan's son Aryan Khan. Fifteen accused have been granted in the case.

A team of Delhi NCB would be arriving in Mumbai tomorrow after the decision to start the investigation in the case.

Riyadh, May 22: Saudi Arabia has announced a fresh travel ban on citizens for 16 countries due to Covid-19 cases in those countries, The General Directorate of Passports (Jawazat) said on Saturday.

The General Directorate of Passports (Jawazat) emphasised that the validity of the passport for Saudis, who intend to travel to non-Arab countries, must be more than six months, Saudi Gazette reported.

The Jawazat reiterated that the soft copy of the national ID on Absher and Tawakkalna applications is not sufficient for travel to GCC states.

The original ID card and family registry must be produced for the travel in addition to a document of proof of dependents inside the Kingdom whose holders are unable to travel to the Gulf countries.

Regarding the health requirements for Saudis travelling outside the Kingdom, the Jawazat listed the following requirements:

- Received three doses of Covid-19 vaccine, with the third dose received after three months of taking the second dose

- Those under 16 and 12 require two doses of the vaccine

Kerala has been experiencing heavy rainfall for the past few days and it has disrupted normal life in certain places of the state. Considering the heavy rains and to be better prepared for the early onset of monsoon in the state, Kerala Chief Minister Pinarayi Vijayan had a day ago issued a slew of directions to ensure that the authorities were prepared to handle problems like landslides and flooding.

Some of the instructions issued by the CM were -- local bodies to prepare a list of disaster-prone areas in their jurisdictions and provide the same to the authorities concerned like police and fire services, ensure relief camps with adequate facilities are in place for evacuating people and desilting of gutters and rivers. The National Disaster Response Force (NDRF) has already deployed five teams to Kerala.

The State Disaster Management Authority (SDMA) has asked people to stay away from rivers and other water bodies until the rains subside. The SDMA has also asked people not to travel to hilly regions unless it's an emergency and to avoid night travel until the rain subsides.

The district administrations have also warned the people against staying near coastal areas of high tide. The IMD has earlier predicted that the Southwest monsoon, which is also known as Edavapathy in the state, is likely to bring its first showers to Kerala by May 27, five days earlier than the normal onset date.