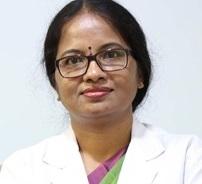 Being pregnant and welcoming a new baby is like beginning of all new things in life. Priorities change, expectations from life, and partner change. Women disorganize their lives to organize a new life. In these emotional times, if a new expecting mom is diagnosed with cancer and that too in the child-bearing uterus, the whole world comes to a standstill, and words cannot express that grief.

Pregnancy complicated with cervical cancer is very rare. About 1 to 3 % of women suffering from cervical cancer are diagnosed either in pregnancy or immediate postpartum and majority of patients present with complaints of bleeding per vaginum. Often this is mistaken for threatened abortion.

Once a patient comes with these symptoms, they will be immediately evaluated for confirmation of diagnosis with a biopsy from the cancerous mass with some basic blood tests and as all X-Rays and CT scans are contraindicated in pregnancy. For staging the patient, an ultrasound or MRI abdomen would be advised.

Treatment of cervical cancer depends on different stages of cancer, the term or stage of pregnancy and as well as on the wishes of the mothers. A pre- invasive cancer treatment can wait till the pregnancy is completed but if preservation of pregnancy is not contemplated, then termination of pregnancy followed by surgery or chemo-radiation according to the stage of the disease is advised.

Majority of the patients present in early stage of the disease continue the pregnancy by delaying the treatment till baby matures and attempt a cesarian section to deliver the baby.

In this period to keep the disease under control, patients are given chemotherapy drugs which can be safely given during pregnancy. Curing the disease is the main objective, and the maternal survival should not be compromised in favour of holding the pregnancy while at the same time giving a fair chance to the little one to see the sunlight.

By Dr. Suneetha is a Radiation Oncologist at American Oncology Institute 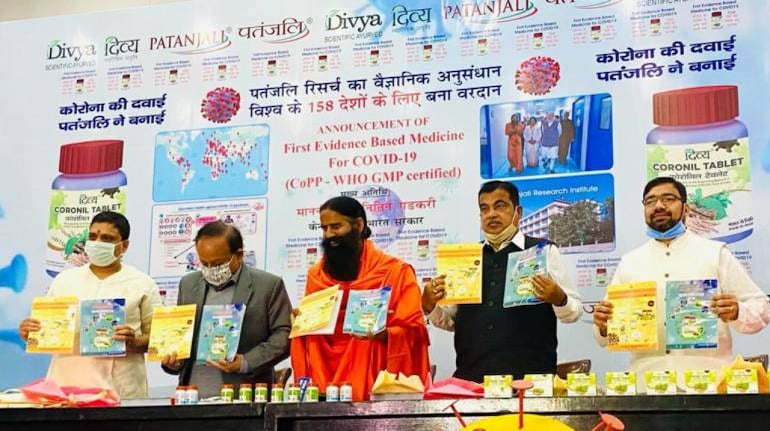 "Being a Health Minister of the country, how justified is it to release such falsely fabricated unscientific product to people of the whole country and how ethical is it to promote the product in unethical, wrong and false ways," said Dr Jayalal, IMA national president.

"Let us not adulterate Ayurveda on the pretext of market gain to some monopoly corporate and create a disaster for humanity," IMA said.

IMA in the statement also said that it will write to National Medical Commission for seeking Suo moto explanation for the blatant disrespect to the code of conduct of the Medical Council of India.

As per the code of act of the Medical Council of India, it is unethical to promote any drug or to prescribe it without knowing its composition.

"It was claimed by Baba Ramdev along with Health Minister that the said Coronil Ayurvedic medicine has got WHO certification. This has been clearly denied by WHO in an official tweet. The said false and fabricated projection of an unscientific medicine by the Health Minister to the entire country and being rejected by WHO is a slap and insult to the people of the country," IMA statement reads.

IMA also sought clarification on clinical trials from the health ministry.
"Being a Health Minister of the country and a modern medicine doctor, can you clarify the scientific results of the clinical trials, if any, for the so-called clinical trial of this said anti-corona product promoted by you?" it asked.

Founder of Patanjali Ayurved Limited Baba Ramdev launched Coronil, a medicine which he claims is the first evidence-based medicine for Covid-19.

Baba Ramdev also said this so-called Coronil to be used for prevention, treatment as well as post-Covid phase treatment. It was mentioned that the said medicine is the first evidence-based medicine. 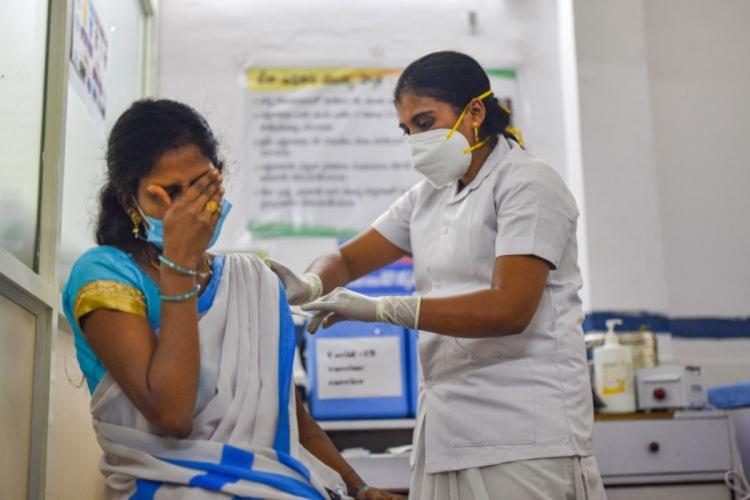 New Delhi, Feb 14: Side-effects after COVID-19 vaccination — 'reactogenicity' in medical linguistic — was reported in 66% of the healthcare workers, which mostly subside within a day of their onset, said a survey conducted by noted public health experts for the Kochi chapter of the Indian Medical Association (IMA). A total of 5,396 healthcare professionals across India, who had received COVID-19 vaccines were surveyed for the study, which was led by Dr Rajeev Jayadevan, a gastroenterologist and former president of IMA Cochin.

In the survey, the respondents in the survey stated that the most commonly reported symptoms they experienced after immunisation were Myalgia or pain in the muscle (44%), fever (34%), headache (28%), local pain at the injection site (27%), joint pain (12%), nausea (8%) and Diarrhoea (3%). Tiredness (45%) was the most prevailing symptoms. "The occurrence of other symptoms such as sore throat, insomnia, giddiness, rigour, an allergic rash, chills, vomiting, syncope were reported 1% or less cases," study said.

My study on post vaccination symptoms among 5396 healthcare workers is available on medRxiv.

Symptoms were more among women and among younger people. Onset within 11 hours, duration mostly less than 48 hours.

Speaking to IANS, Dr Rajeev Jayadevan, who is one of the researchers of the survey, said that one of the key takeaways from the survey is that vaccines are safe and there is no need to fear that it will harm ones' body.

"If over 5,000 people who took it (vaccines) and reported no serious problem, then that is a considerable reassurance that the general public can take the vaccine," he said.

Jayadevan said that younger people produce a lot of inflammatory cytokines, which elicit reactogenicity (symptoms). This is why they have a vigorous response to the vaccines, whereas it is found lower in the elder population. However, he added that the reactogenicity is not considered a reliable sign of producing antibodies.

"There is a misconception among people and even healthcare professionals who believe that the symptoms are associated with the development of antibodies. Everyone responds differently to the vaccines and elicit varied levels of reactogenicity depending upon age and other factors at play. It cannot be considered as a sign to determine that one's body is producing an immune response to the vaccines," Jayadevan explained.

Dr Ramesh Shenoy, another author of the survey, who is a senior radiologist at a hospital in Kochi, Kerala, said that the conclusions derived from the survey could be that the vaccines are safe while its side-effects are mild in nature and short-lived. "The testimonies of the two-third of the respondents vouch for it," he added.

New Delhi, Feb 26: The COVID-19 vaccination sessions will not be held this Saturday and Sunday in view of the Co-Win digital platform transitioning from Co-Win 1.0 to Co-Win 2.0 as India gears up to inoculate people above 60 years and those over 45 years with comorbidities against the infection from March 1.

All states and UTs have been already informed about this transition, the Union Health Ministry said.

The Co-Win software was created for real-time monitoring of COVID-19 vaccine delivery.

The nationwide COVID-19 inoculation drive to vaccinate healthcare workers was launched on January 16 by the prime minister. Vaccination of frontline workers started on February 2.

"The country wide vaccination exercise is being exponentially expanded to include those above 60 years of age and those above 45 years with co-morbidities, from March 1.

"On this Saturday and Sunday (Feb 27 and 28), the Co-Win digital platform will be transitioning from Co-Win 1.0 to Co-Win 2.0. In view of this, COVID-19 vaccination sessions will not be scheduled during these two days. The states and UTs have been already informed about this transition," the ministry said.

According to official sources eligible beneficiaries would be able to register themselves on the Co-Win platform from Monday itself after the transition.

There will also be a walk-in provision for beneficiaries to get themselves registered at the session site itself to get vaccinated.

Everyone above 60 years of age and those over 45 years with comorbidities will be able to get COVID-19 vaccine from March 1 for free at government facilities and for a charge at many private hospitals, the government said on Wednesday.

"Eligible beneficiaries would be able to register themselves on the Co-Win platform from March 1 itself.There will also be a walk-in provision for the beneficiaries to get themselves registered at the nearby session site to get vaccinated," said R S Sharma, Chairman of Empowered Group on COVID-19 Vaccine Administration.

He said the new version of the Co-Win platform will be GPS enabled and beneficiaries will have the option to choose the inoculation session sites both at the government and private facilities.For those who would walk in, there will be volunteers to help those who are not tech-savvy to get registered.

One will also have the option to get inoculated in a state different from the one he or she is a resident of.

People aged above 45 will have to upload and provide a medical certificate mentioning their comorbid conditions. The government is yet to specify the conditions which be included in the over-45 age group with comorbidities.

"The Co-Win will be able to take registrations and appointments from multiple applications including Arogya Setu or any other application such as a common service app," Sharma said.

One will just have to register in with the mobile number and receive an OTP with which his or her account will be created. One can get their family members also registered on the account.

The second phase of the world's largest vaccination drive will start from Monday in which anybody above 60 years, that may not be less than 10 crore people in the country, and 45 years plus with co-morbidities will be given vaccines in 10,000 government medical facilities and also over 20,000 private hospitals, Information and Broadcasting Minister Prakash Javadekar said on Wednesday.

Those who want to get vaccination from private hospitals will have to pay, but the amount will be decided by the health ministry within the next three-four days as they are in discussions with manufacturers as well as hospitals, he said.