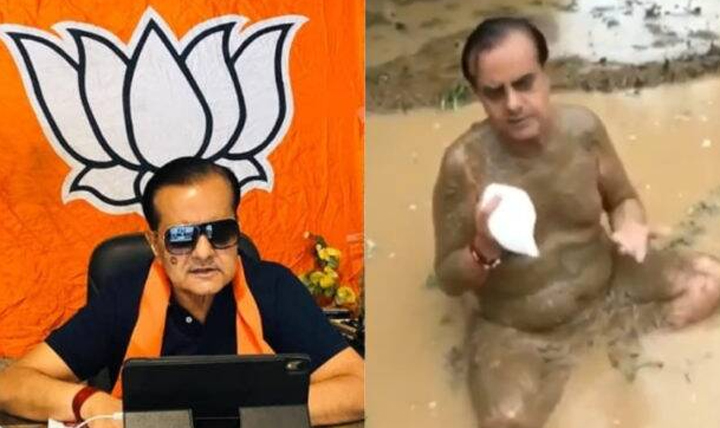 Sukhbir Singh Jaunapuria, a BJP MP from Rajasthan, who had claimed that his mud bath ritual and blowing a conch could increase immunity against Covid19, has now tested positive for the coronavirus.

In the past couple of months, the human ears were subjected to many bizarre treatments which supposedly help in preventing one from contracting COVID-19. From consuming cow urine to eating a particular brand of papads, more recently, blowing a conch shell and taking a mud bath -- the list goes on.

"You will not gain immunity from eating medicines. You will gain immunity naturally. Go out, get wet in the rain, sit in the dirt, work on the farm, blow a conch... and eat 'desi' things. One gains immunity from doing these things," the leader had said in a video posted on his official Facebook page.

He emphasised that immunity can be built through natural means and going outside, and with this, one can prevent themselves from contracting the virus.

Jaunapuria is an MP from Tonk–Sawai Madhopur constituency. He joins Union Minister Arjun Ram Meghwal, who had tested positive days after claiming that Bhabhi Ji papad is an immunity booster against COVID-19. 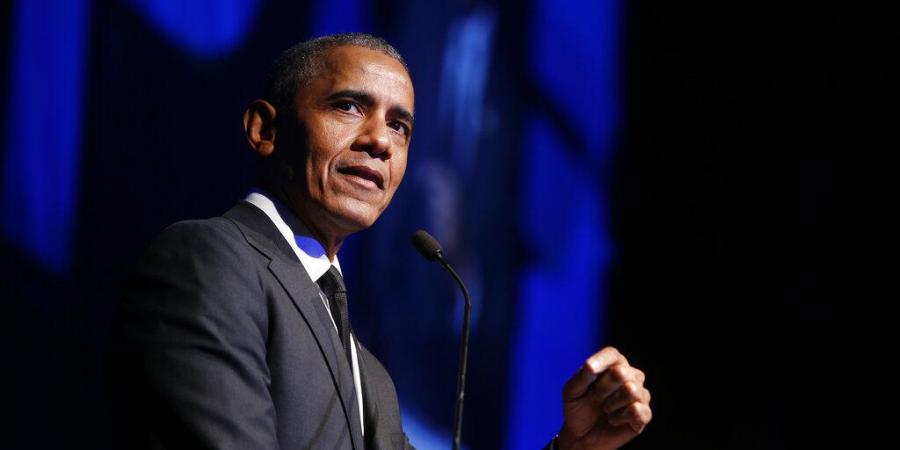 Washington, Oct 22: Former US president Barack Obama delivered a diatribe against his successor Donald Trump on Wednesday, accusing him of mismanaging the pandemic, as he appealed to the people to come out and vote in favour of Democratic presidential candidate Joe Biden.

Jumping into the electoral campaign in support of his former vice president Biden and his running mate Senator Kamala Harris, Obama appealed to the people to defeat Trump and elect the Biden-Harris team on November 3.

"They have a plan for the economy and the coronavirus pandemic," Obama said in his maiden campaign appearance, asserting that the "Biden-Harris team will bring character and leadership back to government".

Obama spoke as the sun set, the sky going from pink to gray, framed by the clouds and the Lincoln Financial Field behind him. He stood by himself on stage, far from even the cars in the lot. His podium was sanitized before he spoke, and though he was without a mask for the speech, he put a 'VOTE mask' on soon after he finished, before walking off.

"We cannot afford four more years of this, Philadelphia," Obama said in his blistering attack against Trump, which is quite unusual for a former president against an incumbent one.

"The idea that this White House has done anything but screw this up is just untrue," Obama said at a drive-in rally.

"Tweeting at the television doesn't fix things. Making stuff up doesn't make things better. You've got to have a plan. We literally left this White House a pandemic playbook... They probably used it to prop up a wobbly table somewhere," he said.

"Donald Trump isn't going to protect us. He can barely take the basic steps to protect himself. If he'd actually been working the whole time, it never would have gotten this bad," Obama said.

"Trump tweeted about secret cabals running the world or that Navy SEALs didn't kill (Osama) bin Laden. Think about that. The president of the United States retweeted that. Imagine that. What? What?" he said.

Describing it as the "most important election of the lifetime", Obama urged his countrymen to go out and vote and not to be complacent like they did in 2016.

"We've got to turn out like never before. We cannot leave any doubt in this election. We can't be complacent. I don't care about the polls," he said.

"Our democracy is not gonna work if the people who are supposed to be our leaders lie every day and just make things up," Obama said. "This notion of truthfulness and democracy and citizenship and being responsible these aren't Republican or Democratic principles. They're American principles. ... We need to reclaim them," Obama said.

At an earlier campaign stop in Philadelphia, Obama said that over the last four years, he has lost hope. "And reason is because I never expected progress to move in a straight line," he said.

Afterward, Obama made a very brief stop at a canvassing event where he was greeted by two young children whose parents encouraged them to get closer, but he kept his distance, waving at them.

"At the end of the day, people connect with people. And obviously this is an extraordinary election, because we're in the midst of a pandemic, and we've got to make sure that we're doing it safely, which is the only reason I'm not hugging and squeezing this cutie-pie," he said, pointing to the little girl, "because I'm trying to model good hygiene. But nevertheless, folks seeing your effort out there is going to be inspiring."

Obama exuded confidence that Biden will win. "We are going to be able to restore the kind of spirit of hope and change and possibility we all believe in," he said.

In a statement, Tim Murtaugh, Trump 2020 communications director, said Biden is "clearly not up to the rigors" of campaigning for president, so he's calling in Obama as a reinforcement.

"And it begs the question: How much did Obama know about his White House being for sale to the highest foreign bidder while Joe Biden was his Vice President? We now know that Hunter Biden was on a world tour, selling access to his powerful father," he said.

There's a reason Obama waited until there were no Democrats left in the primaries before he finally endorsed Joe Biden, Murtaugh said.

"It's because Biden has been a failure for 47 years in Washington and is now compromised by the Communist Party of China. And Obama can't help Biden defend his own record of putting foreign interests ahead of working Americans in bad trade policies, crushing our energy jobs under massive regulations, killing manufacturing jobs, and refusing to enforce our borders," he alleged. 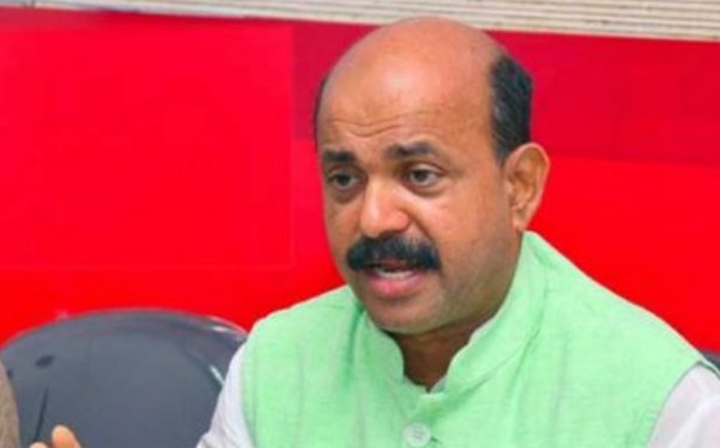 Mangaluru, Oct 22: Former MLA and Congress leader from Mangaluru, Mohiuddin Bava, on Wednesday claimed that he had received a threatening phone call after he visited the Gurupura Ambika Annapoorneshwari temple.

Bava alleged that he received a call from one Anil from Mumbai who threatened him for visiting a Hindu temple, saying, "It's not the Nehru period; it is the Modi period. A beef-eater and Muslim should not visit the temple and make the temple unholy."

The Congress leader filed a complaint with the Surathkal Police Station.

Bava had visited the temple on Sunday after he was invited by the temple priest for the "Kopparige" Pooja.

Karnataka to do pooled covid-19 tests to reduce costs

Bengaluru, Oct 24: The state government hopes to save costs on Covid testing by adopting pooled sampling. In this process, instead of testing just one sample in one test tube, five samples are used.

However, this can be done only when there are greater chances of samples being negative, since, if a sample pool tests positive, then each sample has to be individually tested again.

However, in the rest of the 20 districts, individual tests will continue till they have a weekly average positivity rate of less than 5%. The government pays Rs 800 for every sample’s RTPCR test in a private lab. In Karnataka, 65% of labs are private and more than one lakh tests are done at government and private labs.

In Ramanagara district, which has a TPR of 4.1%, district surveillance officer Dr Kiran Shankar said, “We have a target of testing 800 samples with RT PCR everyday.”

“While pooling samples, we will make sure they are of low risk categories and not SARI, ILI or of patients with comorbidities. In pooling, the cost incurred on reagents added to samples and consumables will come down,” he said.

“Earlier, we would test only 96 samples in one cycle, which would take two-and-a-half hours. Now, we can pool and test 480 samples and get the results in a short time.”

Dr C N Manjunath, state nodal officer for Covid-19 testing, explained the process. “If Ramanagara has a target of testing 800 samples everyday via RT PCR, instead of using 800 test tubes for 800 samples separately, 160 tubes will hold 800 samples as each tube will have five samples.”

Koppal has so far done 75,235 RT PCR tests. It’s weekly test positivity rate (TPR) is 3.7%. Vikas Kishor Suralkar, deputy commissioner, Koppal told DH, “We have been pooling samples even when our TPR was more than 5%. But I agree that the likelihood of a positive pool is less when the TPR is less than 5%. Even if some pools should come positive and we have to test all five samples individually again, one extra test doesn’t increase the cost much. But avoiding five individual tests, when a pool comes negative,  greatly reduces the cost.”