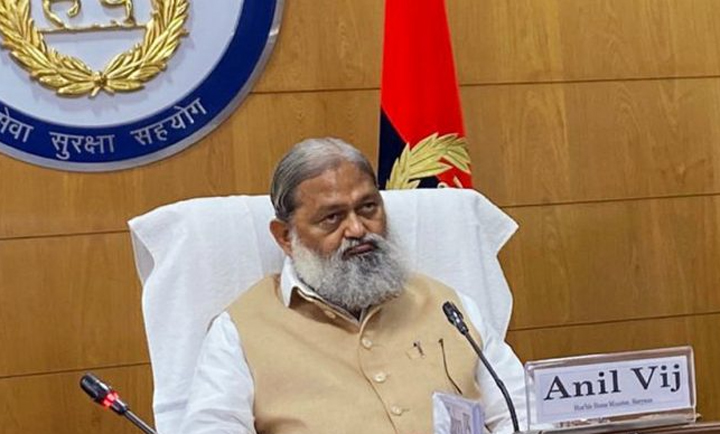 Ambala, Dec 5: Haryana Health Minister Anil Vij said today that he has been admitted to a hospital after testing positive for COVID-19. The 67-year-old BJP leader, who's also the home minister in the Khattar Cabinet, has now requested everyone who might have come in his contact to get tested. "I have been tested positive for Corona. I am admitted in Civil Hospital Ambala Cantt. All those who have come in close contact to me are advised to get themselves tested for corona (sic)," the Ambala Cantt Assembly constituency MLA tweeted.

Notably, a couple of Jannayak Janta Party (JJP) leaders, including Digvijay Singh Chautala, met Vij on Friday in relation to cases registered against some farmers during their 'Dilli Chalo' protests. The delegation sought withdrawal of cases against these farmers. JJP state chief Nishan Singh was also present during the meeting. Yoga guru Ramdev had also met Vij this week on Tuesday.

Ironically, Vij has tested positive for coronavirus just a few days after he offered to be the first volunteer in the phase three trials for Covaxin, which is India's first indigenous COVID vaccine being developed by Bharat Biotech and Indian Council of Medical Research (ICMR). He was given the Covaxin dose on November 20 at the Ambala Cantt Civil Hospital.

"I will be administered a trial dose of Coronavirus vaccine Covaxin a Bharat Biotech product Tomorrow at 11 am at Civil hospital, Ambala Cantt under the expert supervision of a team of doctors from PGI Rohtak and Health Department," Vij had tweeted, adding that he volunteered to take the trial dose.

Meanwhile, Haryana Chief Minister Manohar Lal Khattar had also tested positive for coronavirus on August 21. He had met Union Minister Gajendra Singh Shekhawat, who had tested positive before him.

As per the health ministry, Haryana has a total 14,329 active coronavirus cases. A total of 2,23,973 patients have recovered, while 2,539 have succumbed to the deadly virus so far.

Meanwhile, on this incident, Bharat Biotech has clarified that Covaxin clinical trials are based on a two-dose schedule, given in the time period of 28 days. The vaccine efficacy will only be determined after 14 days of the second dose. "Covaxin has been designed to be efficacious when subjects receive both doses," said the company.

#WATCH Haryana Health Minister Anil Vij being administered a trial dose of #Covaxin, at a hospital in Ambala.

He had offered to be the first volunteer for the third phase trial of Covaxin, which started in the state today. pic.twitter.com/xKuXWLeFAB 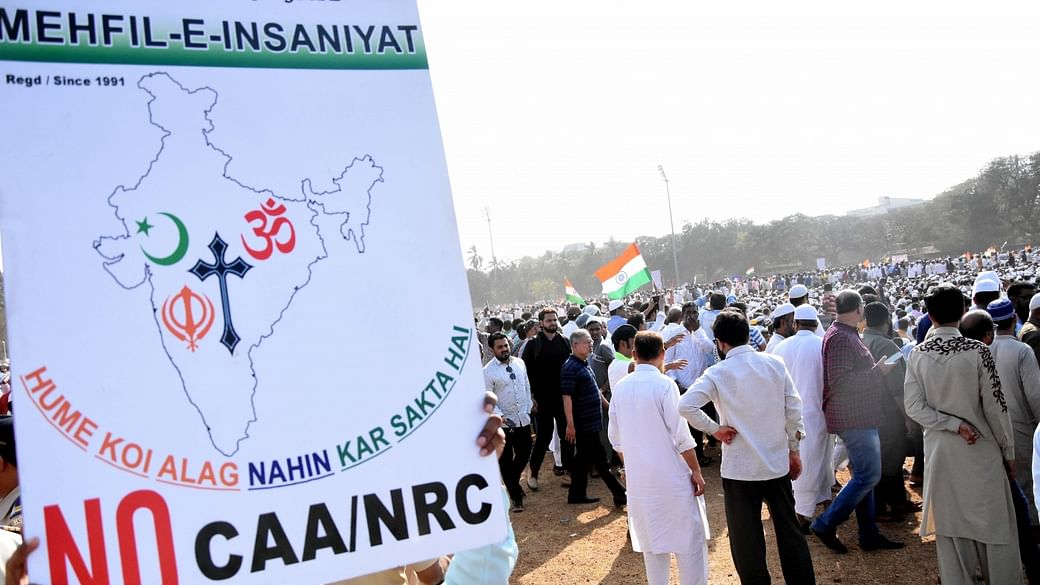 Lucknow, Jan 7: The anti-CAA and NRC protesters in Uttar Pradesh are now planning to form a political party that will raise their issues.

The proposed political party will be named Rashtriya Justice Party and efforts are on to bring protesters from every district on one platform.

This campaign is being spearheaded by former Bahujan Samaj Party MP, Iliyas Azmi, and steps have been initiated to get the new party registered at the Election Commission with a request for 'tarazu' (scales) as the election symbol.

According to Azmi, the anti-CAA (Citizenship Amendment Act) and NRC (National Register of Citizens) protests last year had gained mass support and those who participated in it, did not work on basis of their political affiliations.

"Our purpose is to ensure justice for the weaker and downtrodden sections of society, especially Dalits and Muslims. Several former legislators are also keen to join the new party. Several people who were a part of the protests, are now keen to contest elections," he said.

These include Rajiv Yadav of Rihai Manch, Shahnawaz Alam of Congress and Sumaiya Rana who recently joined Samajwadi Party.

Azmi further said most of the political parties were concerned about vote bank politics but his new party would focus on issues.

WhatsApp chat leak | 'This attack we have won like crazy': Arnab on Pulwama terror strike

New Delhi, Jan 16: The alleged WhatsApp chats of Arnab Goswami, editor-in-chief of Republic TV with former CEO of Broadcast Audience Research Council (BARC), which were leaked on social media, suggest that the controversial journalist was least stricken by the news of Pulwama attack which shook the entire conscience of the country, on February 2014.

Pratik Sinha, co-founder of Altnews, shared a part from the leaked messages wherein Arnab express his joy over the "massive spike" in viewership through the coverage of the terrorist attack.

On the day of attack, at 4:19 PM, Arnab was allegedly saying to Partho: Sir 20 min ahead on the biggest terrorist attack of the year in Kashmir…only only channel with a ground presence.

After a while at 5.43 PM, he was saying: Have planned some build-up thing after we spoke. Idea to gain massive spike. So used his (Prime Minister Narendra Modi's) speech and pushed it by a bit."

This is what nationalism is supposed to be?

It is a known fact that the media benefit from the public's eagerness to obtain information about terrorist attacks. For sensationalist TV channels and newspapers, the fear and fascination generated by terrorism is a substantial part of their business.

"This attack we have won like crazy," the anchor allegedly said in the wake of the attack which killed 40 soldiers.

The leaked-chats is the latest development in the ongoing TRP scam case in which several television channels are accused of manipulating viewership data by bribing the audience.

Many other messages between the anchor and the officer suggest that Goswami was in close proximity with the power corridors at the Centre.

Arnab's WhatsApp chat leaked. The data is more than of 80 MB.

These are few screenshots of Arnab asking help from PMO. pic.twitter.com/YCzGUJ0tcD

Social media is intrigued over the abbreviation "AS" used in the chats denoting powerful persons.

The alleged leak will bother both Arnab Goswami and Whatsapp, at least for a few days, which has been repeatedly claiming that messages in the platform and cannot be viewed by a third party. The Facebook owned platform had given a first page advertisement in all leading newspapers in India to reassert its claims on ensuring privacy of the consumers. 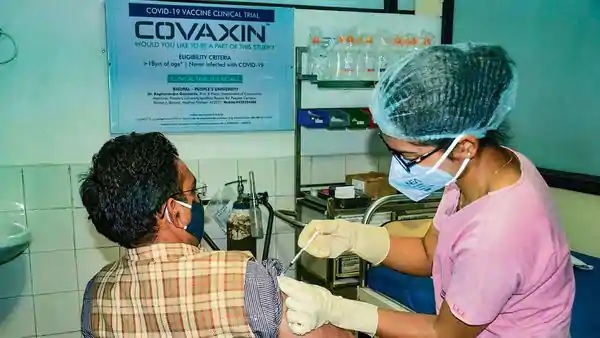 "My deep appreciation to all the volunteers for reposing trust and expressing pro-vaccine public health volunteerism in the phase-3 clinical trials of India's 1st fully indigenous COVID-19 vaccine," Ella added.

The indigenous vaccine has been developed by Bharat Biotech in collaboration with the Indian Council of Medical Research (ICMR) - National Institute of Virology (NIV).

COVAXIN has been evaluated in approximately 1,000 subjects in Phase I and Phase II clinical trials, with promising safety and immunogenicity results, with acceptance in international peer-reviewed scientific journals, the company had said in a statement.

COVAXIN is a highly purified and inactivated 2 dose SARS-CoV2 vaccine, manufactured in a Vero cell manufacturing platform with an excellent safety track record of more than 300 million doses, it had added.

COVID-19 vaccines of Serum Institute of India's 'Covishield' and Bharat Biotech's 'Covaxin' were granted permission for restricted use in an emergency situation by the Drugs Controller General of India (DCGI) on January 3.

Earlier in the day, Union Health Minister Dr Harsh Vardha said that the COVID-19 vaccines 'Covishield' and 'Covaxin' are on the verge of being available in the country.

The Health Minister, while addressing a press conference, said, "COVID-19 vaccines 'Covishield' and 'Covaxin' are on the verge of being available in the country. Our efforts are to ensure seamless last mile delivery of the vaccine."