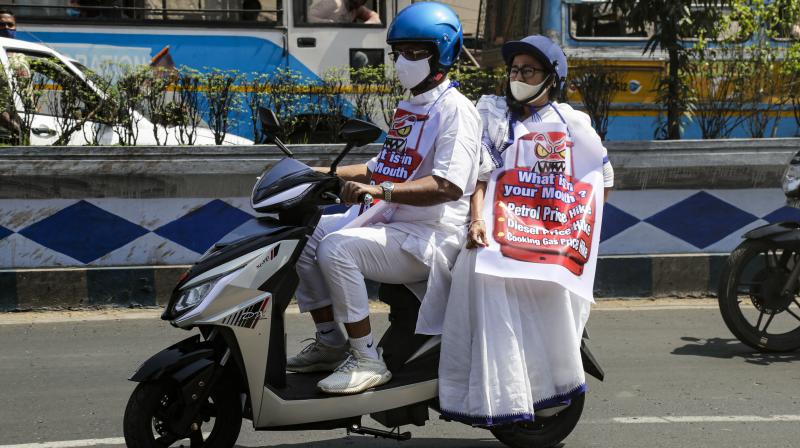 With a placard protesting against the petrol price hike hanging around her neck, helmet-clad Banerjee waved at people on both sides of the road during the five-km-long journey from Hazra More to the state secretariat.

After reaching Nabanna, Banerjee slammed the BJP-led government at the Centre saying, "We are protesting against the fuel price hike. The Modi government only makes false promises. They have done nothing to bring down fuel prices.

You can see the difference in petrol prices when the Modi government came to power and now."

"Modi and Shah are selling the country. This is an anti-people's government," she added.

Mangaluru, Apr 12: The blessed month of Ramadan has begun in Dakshina Kannada and Udupi, as the crescent moon was spotted on the outskirts of the twin districts this evening.

Like previous year, the holy month has begun in many Middles East countries and coastal belt of Karnataka and Kerala on the same day.

We Muslims believe in One God, perhaps the only community on Earth now having this monotheistic belief. Islam means submitting to the will of One God. Actually, Allah means Al ilah, which means The One God. From day one, when human kept the foot on Earth, Islam was there. From time to time people go away from the will of God to the will of their desires or the will of Satan which later created so many deviated paths. These deviated people once were on the true path, the path of God. From time to time, God "sends" Prophets and Messengers (peace be upon them all) to take back human from wrong paths to the right path. These Prophets are righteous people that God chooses among the tribe/nation from time to time in order to guide the deviated tribe or nation. They are given holy books too. We Muslims believe that there were many Prophets sent to humanity from time to time before the last and final Prophet Muhammad (peace be upon him). Since he is the final prophet, his arrival has been mentioned in previous holy books even in Vedas and also in the bible. He is sometimes referred as Anthim Rishi. I request our non-Muslim brothers to research on the Anthim Rishi, Kalki Avathar. Ramadan Mubarak to all.

Many of our relatives/ known people who were with us last year are not with us this ramadan due to corona. Let us make maximum prayers for them. Lets not waste time in petty political and sunni salafi talks. Let us preach simple living

You have a block in your mind blocked the of evil. Once made a shahadah the evil enters your heart and mind to go to Madrassa.The Madrassas are teaching against Hindus, Christians, and Jews. Are you kidding, Islam

After many messengers were sent... and conveyed the message of ONENESS of God... ALLAH sent MUHAMMED pbuh as the last and final MESSENGER to the people to convey the same one MSG of WORSHIP the creator not his CREATION .. WE should not worship EVEN prophet Muhammd pbuh...

ALLAH Revealed QURAN to Muhammad pbuh as BIBLE for JESUS and TORAH for MoSES...

Mohammed was not the first but he was the last messenger of ALLAH... Hope this might help dear PREM PRASAD unless YOUR HEART is not HONEST to know about the CREATOR who created all that exists.....

BE sincere and honest, ALLAH guides those who truly look for him.

Prem Prasad
If you don't understand something it doesn't mean it not exist.
Islam means Peace aquired by submitting your will to God. .
It exists right from beginning

Prem Prasad.
Islam means Peace aquired by submitting our wills to God.
And it exists from beginning of mankind.
If you don't understand something. It doesn't mean it don't exist

Islam is not just Arabic word. It means submission to God and obey his commands. Adam, Moses, Jesus and Mohammed peace be upon all submitted their will to God. Islam exist from beginning. Don't make God so cheap. He is lord for all from beginning till end. No other like him. Don't make image of God and compare to anything

@#11 Mohammed Saleem, Sharjah
You have to argue without logic in a circular manner. World was unknown to the word Islam Prior to 1400 or prior to 1st century. Why did you threw out the 10 commandments of God from O.T. Where was the Term Allah prior t

The only religion is accepted in front of God is Islam.
Islam means total submission to God.
To live according to commandments of God, which he sent time to time in each area through his messengers.
Islam started from first person in earth prophet Adam PBUH.

What was the name of your God prior to 1st century. The word Islam was not prevalent prior to 1400 years. Name Islam prevailed after Arabic was invented in the 1st century. III caliph Uthman is the editor of Quran. He destroyed all the manuscripts given by so-called Gabriel. To which place you were facing and praying prior to 1400 and had you been fasting prior to 1400 years where there was no month called Ramadan. The last prophet to humanity was Joseph Smith of the Mormons religion. 124000 prophets are illusions including false prophets. Don't tell me to read Quran. No need to read any book if a person is living a righteous life.

@Prem Prasad. Islam was not created 1400 years ago. It is a big mis-conception among many non-Muslims. 1400 years ago it was the final installment of the series of prophets (peace be upon them all) and revelations sent to human being by Almighty God. We b

Dear Brother Ahmadi / Asi...
Please make following Dua, U will understand everything...
O ALLAH, make what you teach me beneficial, teach me what is beneficial, and increase me in knowledge...

Ramadan is the month in which MUSLIMS all around the WORLD fast for 29/30 days from dawn to dusk.
Fasting is the fourth pillar of ISLAMIC FAITH
The fast is an act of deep personal WORSHIP to get closer to ALLAH (God Almighty)
It is the month in which the QURAN was revealed to Prophet Muhammad pbuh.

QURAN chapter 2 Verse 183 says : O believers! The fast has been prescribed upon YOU just as it was prescribed for the followers of the Prophets BEFORE YOU, So that YOU may attain TAQWA (Piety)

Prophet Muhammad pbuh said, ALLAH said \All the deeds of man are for himself except for FASTING, which is for ME and I shall reward it Myself...

May ALLAH accept our Fasting and reward as he promised... ALLAHU AKBAR...All praise is to ALLAH, the Lord of all that exists.."

ASI DUBAI sawal acha hi but unfortunately till date no one answered for this question from last 10-15 years.

Where the Moon is sighted ???

Happy Ramadan and may Allah (SU) Bless us all in this Holy Ramadan....

\Allahumma ballighna ramadhaan\"
O allah makes this ramadhan easy for us\"
Join us to say aameen...."

Bengaluru, Apr 13: Amid the rising number of COVID-19 cases, Karnataka Chief Minister BS Yediyurappa on Tuesday said that there is no question of imposing lockdown right now while urging the people to adhere to COVID appropriate behaviour.

The chief minister also called an all-party meeting on April 18 to discuss the COVID situation in the state.

"I have called an all-party meeting on April 18 regarding the COVID situation here. There is no question of lockdown right now. The technical advisory committee has suggested that positive cases will increase here till May 2. Hence, people must abide by COVID appropriate behaviour," said Karnataka Chief Minister BS Yediyurappa

Meanwhile, the Karnataka government has imposed 'corona curfew' (night curfew) between 10 pm to 5 am in Bengaluru, Mysuru, Mangaluru, Kalaburagi, Bidar, Tumkuru, Udupi and Manipal till April 20 in view of the surge in coronavirus cases.

The Karnataka Chief Minister on Monday said if the number of positive cases does not come down soon, a night curfew will be imposed in other districts in the state where it has not yet been imposed.

The TMC chief, while addressing an election rally in Raidighi in South 24 Parganas district, also called upon Muslims not to "fall in the trap of a BJP-aided party from Hyderabad and its Bengal ally that are out to polarise votes."

Her jibe was apparently aimed at Asaduddin Owaisi-led AIMIM and Abbas Siddiqui's ISF. Both Owaisi and Siddiqui had earlier denied the TMC's insinuations. The ISF is fighting the elections in alliance with the CPI(M) and Congress.

The TMC supremo also urged Hindus to be on the guard against the BJP's attempts to "instigate communal clashes" and called upon them to chase away outsiders sent to foment trouble in their respective localities.

Affirming her Hindu identity, in an apparent attempt to counter the minority appeasement charge against her, Banerjee said, "I am a devout Hindu who recites Chandi mantra every day before leaving home. But I believe in our tradition of giving respect to every religion."

Taking a dig at BJP leaders having lunch at houses of Dalits, she said, "I am a Brahmin woman. But my all-time associate is a Scheduled Caste woman who takes care of all my needs. She also cooks food for me."

"I need not advertise this as those bringing five-star hotel lunch to eat at the courtyard of a Dalit home are anti- Dalit, anti-backward caste and anti-minority in nature," she said.

The TMC chief claimed that if elected to power in West Bengal, the BJP will implement the Citizenship (Amendment) Act and the National Register of Citizens (NRC), forcing "many citizens to leave".

"They will divide West Bengal and its people. Remember how they deleted the names of 14 lakh Bengalis and 2 lakh Biharis in the updated NRC in Assam," she said.

Banerjee alleged that central forces are terrorising people at every home 48 hours before polling, asking them to vote for the BJP.