Prime Minister Narendra Modi-led government of India has amended over a 50-year-old rule to allow IAS, IPS and IFoS officers to retain gifts received from foreign dignitaries while being members of the Indian delegation, according to an official order.

Existing rules allowed these officers to accept gifts from their near relatives or from personal friends having no official dealings with them, on occasions such as weddings, anniversaries, funerals and religious functions when the making of gifts is in conformity with the prevailing religious and social practice.

But they shall make a report to the government if the value of such gift exceeds Rs 25,000, the rules say.

Gifts include free transport, free boarding, free lodging or any other service or pecuniary advantage when provided by a person other than a near relative or personal friend having no official dealings with the officer but does not include a casual meal, casual lift or other social hospitality.

"No member of the service shall accept any gift without the sanction of the government if the value of a gift exceeds Rs 5,000," says the All India Services (Conduct) Rules, 1968, applicable to the officers of Indian Administrative Service (IAS), Indian Police Service (IPS) and Indian Forest Service (IFoS).

Member of the service shall avoid accepting lavish hospitality or frequent hospitality from persons having official dealings with them or from industrial or commercial firms or other organisations, these rules say.

The Personnel Ministry has now amended these rules and inserted a new sub-rule under Section 11 of the All India Services (Conduct) Rules, 1968.

"…a member of the service, being a member of the Indian delegation or otherwise, may receive and retain gifts from foreign dignitaries in accordance with the provisions of the Foreign Contribution (Acceptance or Retention of Gifts or Presentations) Rules, 2012, as amended from time-to-time," read the recently amended rule.

The Personnel Ministry had in March last year sought comments from state governments on the proposed rules.

"…presently there are no provisions under the AIS (Conduct) Rules, 1968, with regard to receipt/retention of gifts from foreign dignitaries by members of the AIS being a member of Indian delegation or otherwise. Therefore, it has been decided with the approval of a competent authority to insert a new sub-rule…," it had said in a communiqué dated March 3 last year.

They were asked to send responses by March 31, 2020, positively failing which would be "presumed that the state government has no objection to the proposed amendments".

Gifts received from foreign dignitaries, from known or unknown sources, are usually deposited with the 'toshakhana' -- a repository of such articles -- in the Ministry of External Affairs.

PM Modi says his govt has taken several steps for the welfare of the farmers, Muslim women

Lucknow, Nov 19: Prime Minister Narendra Modi on Friday said that the previous regimes had 'looted' Uttar Pradesh, even as he sought to woo Muslim women by referring to the law against triple talaq.

In his first public meeting at Mahoba, after announcing scrapping of the three farm laws, Modi made no reference to them but listed the measures initiated by the government for the benefit of the farmers.

"They (opposition regimes) never got tired of looting UP and we never get tired of working for the development of the state," the prime minister told the crowd after inaugurating several developmental projects at Mahoba.

Modi said that he had promised to the Muslim women of Mahoba a few years back that the government would scrap the menace of triple talaq. "The promise has been fulfilled," he added.

He said that the natural resources of the Bundelkhand region had been handed over to the mafia elements by the previous governments. "Now when the mafia elements are being bulldozed their sympathisers are feeling the pain," he said.

The prime minister said that his government had taken several steps for the welfare of the farmers. "Rs 1.62 lakh crore has been sent directly into the accounts of the farmers through the PM Kisan Samman Nidhi," he added.

Modi also said that the government had initiated several measures to prevent migration from the arid Bundelkhand region.

‘How can we forget?’: Farmers in no mood to forgive despite Modi’s U-turn on infamous laws 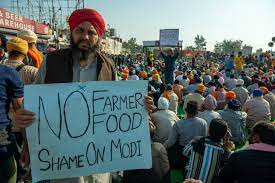 New Delhi, Nov 20: Prime Minister Narendra Modi may have caved in to farmers' demands that he scraps laws they say threaten their livelihoods.

But the reaction to the shock U-turn in the northern states, where Bharatiya Janata Party (BJP) faces key elections next year, has been less than positive, a worrying sign for a leader seeking to maintain his grip on national politics.

In Uttar Pradesh's Mohraniya, farmer Guru Sevak Singh said that he and others like him lost faith in Modi and his party.

"Today Prime Minister Modi realised that he was committing blunder, but it took him a year to recognise this and only because he now knows farmers will not vote for his party ever again," said Singh.

For the young farmer, the matter is deeply personal.

Singh's 19-year-old brother Guruvinder was killed in October when a car ploughed into a crowd protesting against the farm legislation, one of eight people who died in a spate of violence related to the farmers' uprising.

Thousands of agricultural workers have protested outside New Delhi and beyond for more than a year, shrugging off the pandemic to disrupt traffic and pile pressure on Modi and the BJP who say the new laws were key to modernising the sector.

"Today I can announce that my brother is a martyr," Singh told Reuters, weeping as he held a picture of his dead brother.

"My brother is among those brave farmers who sacrificed their lives to prove that the government was implementing laws to destroy the agrarian economy," he added.

Around him were several police officers, who Singh said were provided after his brother and three others were killed by the car. Ashish Mishra, son of MoS Ajay, is in police custody in relation to the incident.

Ajay Mishra Teni said at the time that his son was not at the site and that a car driven by "our driver" had lost control and hit the farmers after "miscreants" pelted it with stones and attacked it with sticks and swords.

'How can we forget?'

In 2020, the Modi government passed three farm laws in a bid to overhaul the agriculture sector that employs about 60 per cent of India's workforce but is deeply inefficient, in debt and prone to pricing wars.

Angry farmers took to the streets, saying the reforms put their jobs at risk and handed control over crops and prices to private corporations.

The resulting protest movement became one of the country's biggest and most protracted.

Leaders of six farmer unions who spearheaded the movement in Uttar Pradesh and Punjab states said they would not forgive a government that labelled protesting farmers as terrorists and anti-nationals.

"Farmers were beaten with sticks, rods and detained for demanding legitimate rights ... farmers were mowed down by a speeding car belonging to a minister's family ... tell me how can we forget it all?" said Sudhakar Rai, a senior member of a farmers' union in Uttar Pradesh.

Rai said at least 170 farmers were killed during anti-farm law protests across the country. There are no official data to verify his claims.

A senior BJP member who declined to be named said the decision to repeal the laws was taken by Modi after he consulted a top farmers' association affiliated to his party.

The politician, who was at the meeting when the party agreed to back down, said those present conceded the BJP had failed to communicate the benefits of the new laws clearly enough.

Leaders of the opposition and some analysts said Modi's move was linked to state elections next year in Uttar Pradesh - which accounts for more parliamentary seats than any other state - and Punjab.

"What cannot be achieved by democratic protests can be achieved by the fear of impending elections!" wrote P. Chidambaram, a senior figure in the opposition Congress party, on Twitter.

But farmers like Singh warned that the government could pay a price for its treatment of farmers.

"We are the backbone of the country and Modi has today accepted that his policies were against farmers," said Singh. "I lost my brother in this mess and no one can bring him back."