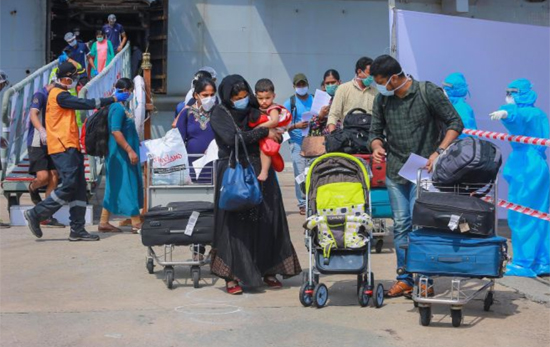 May 29: Over 45,000 stranded Indians were brought back home from abroad under the Vande Bharat mission and another 1,00,000 will be evacuated till June 13, the Ministry of External Affairs said on Thursday.

The mega evacuation mission was launched on May 7.

"This is being done by taking advantage of foreign carriers flying to India primarily for evacuation of their nationals," he said during an online media briefing.

He said a total of 45,216 Indians were brought back till Thursday afternoon and they include 8,069 migrant workers, 7,656 students and 5,107 professionals.

About 5,000 Indians have returned through land border from Nepal and Bangladesh.

Srivastava said a total of 3,08,200 people have registered their request with Indian missions abroad for repatriation to India on compelling grounds.

"During the phase two, a total of 429 Air India flights (311 international flights + 118 feeder flights) from 60 countries are scheduled to land in India. The Indian Navy will be making four more sorties to bring back returnees from Iran, Sri Lanka and the Maldives," Srivastava said.

The MEA spokesperson said the government is targeting to bring back 1,00,000 people from 60 countries by the end of phase two of the Vande Bharat mission.

"Preparations for third phase of Vande Bharat Mission are well underway," he said.

As per the government's policy for evacuation, Indians having "compelling reasons" to return like pregnant women, elderly people, students and those facing the prospect of deportation are being brought back home.