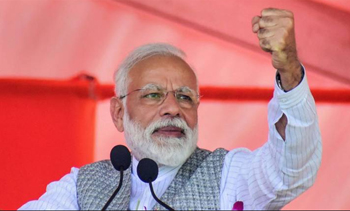 Modi would be on one-day visit to Nashik, in north Maharashtra, where he will address the concluding rally of 'Mahajanadesh Yatra' undertaken by Chief Minister Devendra Fadnavis.

Fadnavis toured the state ahead of the next month's polls to highlight his government's performance in the last five years.

BJP sources said that it was expected that Modi would make some announcement related to the Metro Neo project for Nashik city.

Modi will "set the party's narrative for the assembly elections" at the rally on Thursday, a BJP spokesperson said.

Meanwhile, NCP and MNS activists showed black flags to Fadnavis as his convoy entered the city on Wednesday.