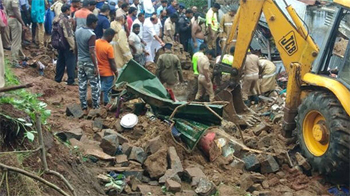 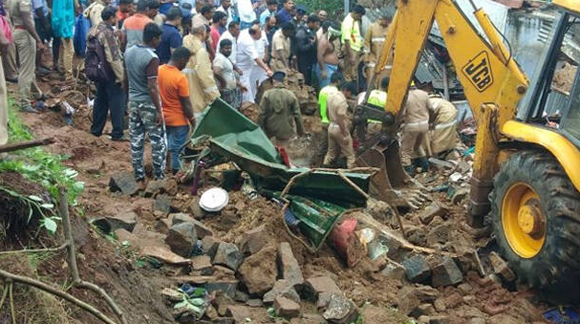 Coimbatore, Dec 2: At least 17 people, including seven women and two children, were killed when a wall collapsed on four houses amid heavy downpour in Tamil Nadu's Mettupalayam area on Monday. More peope are feared trapped under the debris and rescue operations are on.

The houses were completely destroyed when a private compound wall, soaked in heavy rains, fell on them.

The total death toll from rain-related accidents have reached 18 across Tamil Nadu with Monday's tragedy in Mettupalayam, north of Coimbatore city.

Rains lashed many parts of Tamil Nadu and neighbouring Puducherry as the North-East monsoon intensified in the last 24 hours claiming one life in the state capital, Chennai, even as the Met office predicted more showers till Tuesday.

Various parts of the state have been receiving good rainfall since the onset of the monsoon on October 16.

He said light to heavy rainfall may occur over the next 24-48 hours.

To a query, he said the rainfall recorded since October 1 was 39 per cent which was three per cent higher than the rain received during the setting of the monsoon.

A flood alert has been issued to people living on the banks of river Bhavani in this western district of Tamil Nadu as a dam built across it has surplussed in the wake of copious rains in catchment areas, officials said on Monday.

The water level in the Lower Bhavani Project reservoir reached its maximum of 105 feet and the storage crossed 32 tmc feet against maximum of 32.8 tmc ft, prompting the Public Works Department authorities to more than triple discharge from 3,500 cusecs to 11,950 cusecs on Monday morning.

The dam has filled up for the sixth time this year following heavy rains in the catchment areas in hilly Nilgiris district and Mettupalayam in neighbouring Coimbatore district.

For Chennai and its surrounding areas, light to moderate rainfall may occur over the next two days.

"The city received 51 cm this season which is 9 per cent less compared to the normal 60 cm received during monsoon season," Puviarasan said.

City Police Commissioner A K Viswanathan took stock of situation in the state capital and reviewed the measures taken following the heavy rainfall.

Talking to reporters, Viswanathan said all the departments have been alerted to take stock of situation in a coordinated manner.

He said a WhatsApp group of officers has been formed to ensure that immediate steps would be taken.

Several low-lying areas in the city were inundated.

A 49-year-old man died at Ambattur on Saturday night after he accidentally fell into a stormwater drain.

The Met advised fishermen not to venture into sea at Cape Comorin and Lakshadweep area as gusty winds were likely to occur due to the presence of depression in the Arabian Sea.

To another query, Puviarasan said Nagapattinam district received the maximum rainfall registering 81 cm as against 67 cm normally during the monsoon season.