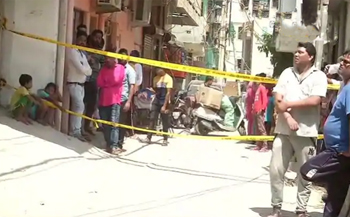 Upender Shukla, a private tutor, has been arrested and he is suspected to be suffering from depression, they said.

He killed his wife, Archana, and his two-month-old daughter, five-year-old son and seven-year-old daughter by slitting their throats in the early hours of Saturday, Deputy Commission of Police (South) Vijay Kumar said.

At the time of the killings, the accused's mother-in-law was in their house in Mehrauli which has two rooms.

When Shukla did not open the door of his room on Saturday morning, she informed the neighbours who broke it open and found him sitting next to the bodies, the officer added.

They then called up the police, he said.

A written note was found in which Shukla confessed to the killing of his wife and children. He, however, did not give any reason for it, the officer said.

Preliminary investigation suggests that the killings took place between 1 and 1.30 am, the officer added.

The knife used in the incident has been seized and further investigation is underway, he said. 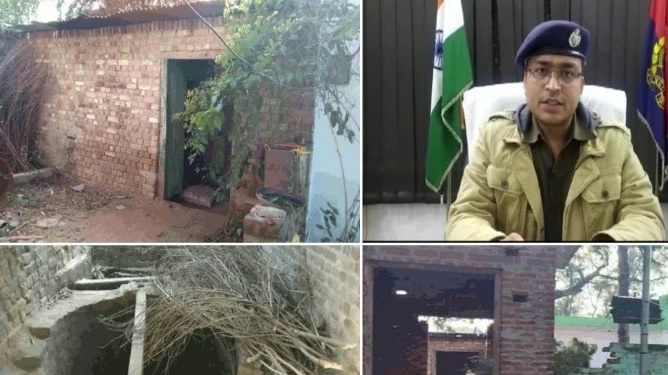 Badaun, Jan 8: Satyanand, the main accused in the Badaun gangrape and murder case, landed in police net, late on Thursday night, almost four days after a 50-year-old woman was allegedly gang-raped and abandoned outside her home at a village in Badaun district.

District magistrate, Kumar Prashant, confirmed that Satyanand, the local temple priest and the main accused was hiding in the house of one of his followers in a village from where he was picked up and arrested.

Two of his aides had been arrested earlier.

It may be recalled that the victim, a 50-year-old woman, had gone to the temple on Sunday evening.

Later, on Sunday night, she was dropped outside her home in a critically injured condition by two men. The woman later succumbed to the injuries.

According to sources, the victim was a regular visitor to the temple.

Satyanand had come to the village around five years ago and remained mostly aloof. He lived in of the rooms in the temple complex.

People who frequented the temple said Satyanand conducted rituals for them and also offered concoctions for aches and pains.

Badaun SSP Sankalp Sharma said: "The two men arrested have said that they found the woman in an injured state and wanted to help her."

The woman's family rejected the arrested duo's assertion. Her son-in-law said, "If they wanted to help, they could have woken up people in the village. But their intention was to leave her dead. She was a God-fearing lady; we cannot imagine something like this would happen to her in a temple."

Meanwhile, National Commission for Women member Chandramukhi Devi, who visited the village on Thursday, has stirred a hornet's nest by saying that the incident would not have happened had the woman not stepped out alone in the evening.

"This is a crime that has shamed humanity, but I would also like to say that women should not step out alone at odd hours. I feel had the woman not stepped out in the evening, or one of her children had accompanied her, the incident would not have happened," she said.

NCW Chairperson Rekha Sharma said, "I don't know how and why the member has said this but women have the right move on their will whenever and wherever they want to."

Mumbai, Jan 14: A 26-year-old woman has died after her husband allegedly pushed her out of a running local train while they were standing at its door in Mumbai, a police official said on Thursday.

The incident took place on Monday afternoon between Chembur and Govandi railway stations following which the woman's husband was arrested, he said.

The 31-year-old accused and the victim, both labourers and residents of Mankhurd area, got married two months back.

On Monday, they were travelling in a local train along with the victim's seven-year-old daughter from her previous marriage, the Government Railway Police (GRP) official said.

As the woman leaned out of the moving train, her husband held her at the doorway, and then allegedly released her from his grip, following which she fell on the tracks, the official said.

Later, when the train stopped at Govandi station, a woman commuter in the coach, who had been watching the couple, got down and alerted the railway police about the incident.

The police caught the man at the station and then took him to the incident spot, where they found his wife lying injured and unconscious, the official said.

The victim was rushed to a hospital where doctors declared her dead before admission, he said.

The man was arrested and an FIR was registered against him under relevant sections.

The police are trying to verify if the accused was under the influence of sedatives at the time of the incident, the official said.

The woman's daughter was handed over to her relatives, he added.