Mangalore, Aug 24: In a shocking case of vigilante attack, a group of sadists belonging to Sangh Parivar brutally assaulted three youths while transporting cattle last night near Pumpwell in Mangalore.

Abdul Sameer, Sadiq and Shoukath Ali, all three residents of Chembugudde and surrounding areas, have been hospitalized in a critical condition after the merciless attack.

It is learnt that the three youth were dragged out of their vehicle and punched and kicked on all sensitive parts of the body by the inebriated men, who shouted Jai Shree Ram' slogans during the attack. The assailants also used stones and batons to punish the trio.

Medical sources said that Abdul Sameer, who is currently undergoing treatment at the intensive care unit of a private hospital, has sustained fractures and deep wounds throughout his body. Two others are recuperating at Government Wenlock Hospital in the city.

The vigilante attack occurred when the victims were transporting 13 cattle from Uppinagady towards Mangalore in a vehicle.

A Hindutva activist, who came to know that those who are transporting cattle belonged to Muslim community, passed the information to other members of his outfit, sources said.

A group of miscreants immediately began to chase the cattle-laden vehicle. When the driver stopped the vehicle near Pumpwell, the assailants dragged three youths onboard the vehicle and began to assault them.

The brutal assault continued till the police reached the spot. Police sources said that three among the assailants identified as Prakash, Manoj and Shivaraj, were taken into custody from the spot.

A case has been registered at jurisdictional Kankanady police station and investigations are on. The vehicle and cattle belonged to victims also were taken to the police station. 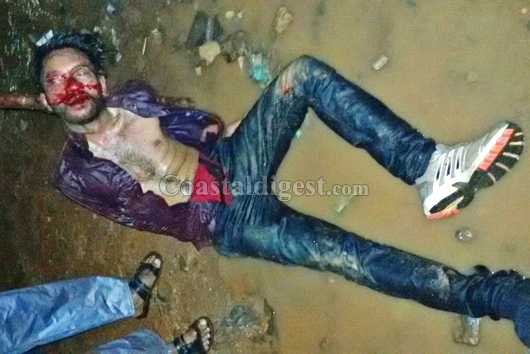 Mangalurean among two youngsters arrested over suspicion of terror link

Shivamogga Rural police registered a case against Shariq of Thirthahalli Maaz Munir Ahmad (22) of Mangaluru and Syed Yasin (21) of Shivamogga under Unlawful Activities (Prevention Act) 1967 for having link with banned terrorist organisations and plotting to carry out terrorist activities.

They were found to have burnt the national flag. The police arrested Munir and Syed and produced them before the court. Later, they were remanded in police custody till September 29.

"They were found to be acting under the influence of a terror organisation," Superintendent of Police B M Laxmi Prasad said.

According to police, they were accused of plotting conspiracy to commit a terror act and following the agenda of a terror organisation.