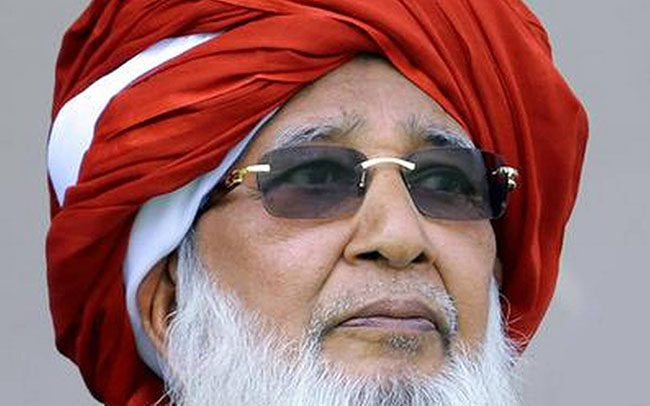 Kanthapuram A P Aboobacker Musliyar, the grand mufti of India and the Chancellor of the Jamia Markaz has been honoured by the UAE government with a Golden visa.

The religious leader received the Golden Visa at a ceremony held at the office of Dubai Naturalisation and Residence Department.

The honour is given in recognition of the international ties between the UAE and Jamia Markaz, as well as educational exchanges and charitable activities.

The ten-year Golden Visa is issued by the UAE government to prominent individuals in various fields.

Musliyar is said to be the first person to receive a Golden Visa from India for educational and charitable activities. He has a significant influence on the Arab region and international arenas as the grand mufti of India.

Bengaluru, Oct 27: The number of Delta AY.4.2 variant of coronavirus, which is spreading rapidly in some foreign countries, has increased to seven in Karnataka with three more people found to be infected with it in the Bengaluru.

Speaking to reporters here, State Health and Family Welfare Commissioner D Randeep said, "There are seven cases (of AY.4.2) in the state -- three in Bengaluru and four in different parts of the state."

Maintaining that the Covid-19 cases are under control in the state, Randeep said the government is making a negative RT-PCR test report, obtained 72 hours before arrival, mandatory for those coming from abroad to the state.

"The test report has to be uploaded on a portal called Air Suvidha. Other than that, there is no restrictions like quarantining people," Randeep clarified.

He further said the Centre and the state will initiate certains measures to check the super-spreader variant of Covid-19, which has spread in some foreign countries. There are no reports of deaths due to the new variant but one or two people have been hospitalised, he added.

Belagavi, Oct 28: A fact-finding report on the coldblooded murder of Arbaz Aftab Mulla in Belagavi has accused the Superintendent of Police (SP) Laxman Nimbargi of trying to shift the blame from the accused Sri Ram Sene (Hindustan) to make the murder look like a contract killing.

Mulla, aged 25, was murdered on September 28 allegedly over his relationship with a Hindu girl. A seven-member team comprising persons from the All India Lawyers' Association for Justice, All India People's Forum and other associations as well as an independent researcher visited Belagavi last month.

It said the targeted violence is the result of years of "deliberate and neatly orchestrated" communal politics dividing the society. Despite the arrest of 10 people on October 8, ten days after the murder, justice remains a long shot.

"Our findings suggest that while the girl's parents might have had a role to play in the murder, the SP's allegation that the girl's parents had hired contract killers could also be a ploy to shift the bulk of the blame from the SRS(H) to the family, thereby making the murder appear to be a contract/supari killing and not a communal honour killing," the report said.

Mulla's mother Najeema Shaikh, a teacher at a local Urdu medium school, told the team that the Hindu girl's mother had threatened that "she was ready to kill or even die" in order to prevent the girl's marriage with mulla.

"While parental objections to a romantic relationship is not unusual, what struck us was the language in which it was articulated," the team said. Expressing concerns over the 'complete invisibilisation' of the voice of the woman with whom Mulla was in a relationship, it said her individual identity has been nullified.

It warned that the 'saffron sphere of influence' in north Karnataka was a grave threat to minorities all over the state and appealed to all citizens to come together to ensure justice for Mulla. It said a broad-based campaign was required to ensure justice to all minority communities and work towards rebuilding social harmony.

"Those we spoke to in Belagavi, unanimously pointed out the systemic impunity of members of organisations like SRS (H) from facing the consequences of crimes committed by them," it said citing allegations that the members of the pro-Hindutva group were given VIP treatment inside the prison.

The report further said thwarted aspirations of integration with Maharashtra have contributed to Hindu nationalism's hold over the region. "This morphing of linguistic politics into religious politics in the region holds important lessons for secular, democratic forces. It shows how the weakness of alternative political frameworks and lack of citizen alertness against Hindu nationalist groups can decisively alter the social and cultural fabric of a nation," it said.