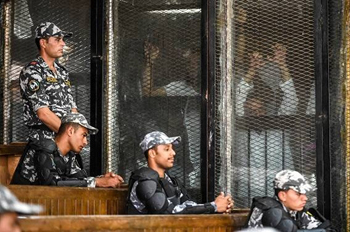 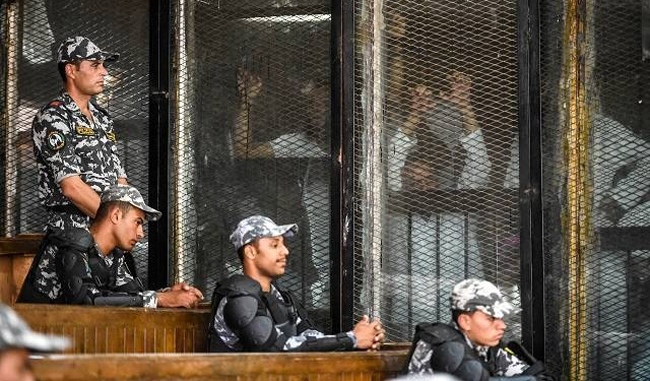 The six were killed in a firefight when police raided their hideout in the Cairo suburb of Sixth of October, the ministry said in a brief statement. The ministry oversees police forces.

The statement said the suspects were planning militant attacks. It did not say when the raids took place, whether police forces were wounded in the clashes with the militants, or otherwise elaborate.

Tuesday's development came days after rare anti-government demonstrations in several Egyptian cities over the weekend. The protesters called for President Abdel-Fattah Al Sissi to step down. Hundreds, including political activists, were arrested, according to rights lawyers.

Although it was calm Tuesday, security personnel were visible in Cairo's main streets and squares, especially in the city's downtown and Tahrir Square, the symbol of the 2011 pro-democracy uprising. There were calls for more protests in the coming days on social media.

The protests emerge from an online campaign led by an Egyptian businessman living in self-imposed exile who has presented himself as a whistleblower against corruption.

El-Sissi, who is in New York for the United Nations General Assembly, has dismissed the corruption allegations as "sheer lies." However, he said he would continue building new presidential residences for the good of Egypt. "I am building a new country," he said.

On Monday, US President Donald Trump voiced support to the Egyptian president, saying that Al-Sissi "has done some things that are absolutely amazing in a short period of time."

He said he was not concerned with the demonstrations against Al Sissi.

"When he took over not so long ago, it was in turmoil. And it's not in turmoil now," Trump said in a press conference along with Al-Sissi after their meeting. "Egypt has a great leader. He's highly respected. He's brought order. Before he was here, there was very little order. There was chaos. And so I'm not worried about that at all."

Al-Sissi, who has been waging a harsh crackdown on extremists, blamed "political Islam" for the protests and the turmoil in the Mideast. He stopped short of naming the Muslim Brotherhood directly.

"I want you to rest assured that, especially in Egypt, the public opinion and the people themselves are refusing this kind of political Islam in Egypt," he said. "They have demonstrated their refusal before, and they refuse those to have control on the country for only one year." Egypt is fighting an insurgency led by a local affiliate of the Islamic State group in the Sinai Peninsula as well as smaller militant groups allegedly belonging to the Brotherhood.