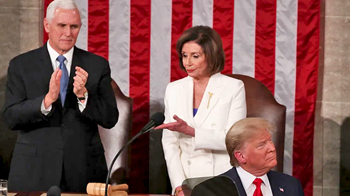 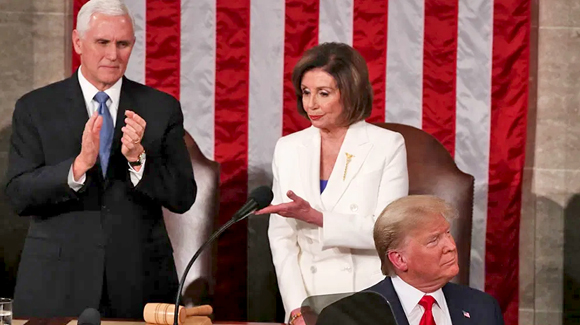 Feb 5: US President Donald Trump delivered his third State of the Union address on Tuesday, the eve of his expected impeachment acquittal in the United States Senate.

The mood in the House of Representatives reflected the divisions running across the country. Republicans cheered as Trump was introduced, with some chanting "four more years" while Democrats stood silently.

On the foreign policy front, Trump said the US is "working to end America's wars in the Middle East".

He boasted about his decision to order the killing of top Iranian Commander Qassem Soliemani. That decision escalated tensions between the US and Iran, with many fearing an outright war.

Iran retaliated by attacking two Iraqi military bases housing US troops. After Trump initially said no troops were injured, the Defense Department announced dozens of US soldiers had been diagnosed with traumatic brain injuries.

Trump also reiterated his vow to withdraw US troops from Afghanistan. When he plans to do that, however, remains unclear.

US special envoy Zalmay Khalilzad told Afghan President Ashraf Ghani earlier this week that there has not been any significant progress in his talks with the Taliban. Khalilzad said he was hopeful of reaching an understanding with the group on reduction of hostilities, but did not offer any timeframe.

Trump also touted his newly-unveiled Middle East plan, which has been vehemently rejected by Palestinians.

And he received loud applause after reminding the country that ISIL (ISIS) leader Abu Bakr al-Baghdadi was killed last year in a US military operation in Syria.

"Today, the ISIS territorial caliphate has been 100 percent destroyed, and the founder and leader of ISIS - the bloodthirsty killer Al Baghdadi - is dead!" Trump said.

Trump spent much of his speech highlighting the economy's strength, including low unemployment, stressing how it has helped blue-collar workers and the middle class, though the period of growth began under his predecessor, Barack Obama.

"In just three short years, we have shattered the mentality of American decline and we have rejected the downsizing of America's destiny. We are moving forward at a pace that was unimaginable just a short time ago, and we are never going back!" Trump declared.

And what Trump calls an unprecedented boom is, by many measures, not all that different from the solid economy he inherited from Obama. Economic growth was 2.3 percent in 2019, matching the average pace since the Great Recession ended a decade ago in the first year of Obama's eight-year presidency.

Trump stressed the new trade agreements he has negotiated, including his phase-one deal with China and the United States-Mexico-Canada agreement he signed last month.

Throughout his presidency, Trump has frequently touted his stewardship of the US economy. As recently as two weeks ago, he claimed it was in "a rather dismal state" until he and his administration turned it into a "roaring geyser of opportunity".

But the numbers do not support the "geyser" narrative. There are signs the record US economic expansion - now in its 11th year - is getting long in the tooth.

Job creation is slowing. And the US economy's modest 2.3 percent growth was well short of the 3 percent growth Trump had predicted following a $1.5 trillion tax cut package he and his fellow Republicans pushed through Congress in 2017.

Trump's trade war with China weighed on US manufacturing last year as businesses held back on investment. And while factory activity bounced back in January amid the signing of a phase-one trade deal between Washington and Beijing, US tariffs still remain in place on some $360bn of Chinese goods.

The coronavirus outbreak and the ongoing troubles for Boeing surrounding the 737 MAX could also present headwinds to growth, analysts say.

One of the big questions of the night was whether Trump would directly mention impeachment. He chose to stay away. The House impeached the president at the end of last year for abuse of power related to his dealings with Ukraine and obstruction of Congress for refusing to participate in the impeachment inquiry.

The Senate started its trial more than two weeks ago, and a final vote is scheduled for 4pm local time (21GMT) on Wednesday.

Trump shared an awkward moment with House Speaker Nancy Pelosi, who kicked off the House's impeachment inquiry in September following a whistle-blower complaint that centred on Trump's efforts to get Ukraine to launch investigations into the president's political rival.

At the start of Trump's speech on Tuesday night, it appeared Pelosi went to shake the president's hand, a gesture amid the impeachment proceedings.

The president was presenting folios to Pelosi and Vice President Mike Pence as he arrived for the evening speech when it appears she reached for the shake. At the same time, Trump turned away from her to face the audience of lawmakers gathered for the annual address.

After the address was over, Pelosi ripped up her copy of the speech - a move the White House criticised.

Trump is only the third president to be impeached. He has denied any wrongdoing.

While some Republicans have acknowledged Trump did something wrong, they've argued that it didn't amount to an impeachable offence. Trump is headed towards an all but certain acquittal on Wednesday in the Republican-led Senate.

Trump appeals to base

As expected, Trump also dedicated a section to "American values", discussing efforts to protect "religious liberties" and limit access to abortion as he continues to court the evangelical and conservative Christian voters who form a crucial part of his base.

He attacked the Democrats over their healthcare plans, labelling them "socialist".

He brought up his signature campaign issue - immigration, at times making untrue or misleading statements.

"Before I came into office, if you showed up illegally on our southern border and were arrested, you were simply released and allowed into our country, never to be seen again," Trump falsely. "My administration has ended catch-and-release. If you come illegally, you will now be promptly removed."

But under previous administrations, Mexicans were quickly returned back over the US-Mexico border, while others were held in detention until they were deported. Some migrants from other countries were released into the interior of the US to wait out their immigration cases.

And despite Trump's claims that all irregular migrants are now "promptly" removed, there is a one million immigration court case backlog, which means many migrants wait up to three years before a court hearing before a judge who will determine whether someone is deported. After a judge rules a migrant deported, travel papers must be obtained, which often leads to further delays.

As for ending the so-called "catch and release" policy, Trump actually expanded that policy last year during a surge in migrants, releasing thousands of migrants who flooded shelters along the border. The surge has since passed, so fewer people are being held and fewer would need to be released. But an effort by immigration officials to detain children indefinitely was blocked by a judge, so children are still released into the country.

In a gesture that left nearly everyone - including its recipient - looking dumbfounded, Trump announced he was giving right-wing radio host Rush Limbaugh the nation's highest civilian honour.

Limbaugh, who announced this week that he had advanced lung cancer, appeared stunned, his jaw visibly dropping as Trump made the announcement. Others sat in silence as first lady Melania Trump draped the medal around his neck on the spot.

"Thank you for your decades of tireless devotion to our country," Trump told Limbaugh, who often promotes conspiracy theories on his radio show.

At least 10 Democratic lawmakers, including some who have been attacked by the president, boycotted the address in a sign of protests.

"After much deliberation, I have decided that I will not use my presence at a state ceremony to normalise Trump's lawless conduct & subversion of the Constitution," Representative Alexandria Ocasio-Cortez said in a series of tweets announcing her decision.

Ocasio-Cortez, as well as Representative Ayanna Pressley, who also boycotted, were the subjects of racist attacks by the president last year that resulted in the House voting to condemned his comments, telling the pair and two other congresswoman of colour - Ilhan Omar and Rashida Tlaib - to "go back" to their countries. All four are US citizens.

Tlaib, along with some other Democratic representatives said they walked out of Trump's speech, calling it "shameless".

Dozens of other congresswomen wore white, representing the colour of women suffragettes.

Other Democrats wore red, white and blue-striped lapel pins to highlight climate change, saying Trump has rolled back environmental safeguards and given free rein to polluters.

Michigan Democratic Governor Gretchen Whitmer delivered her party's official response and drew a contrast between actions taken by Democrats and the president's rhetoric.

"It doesn't matter what the president says about the stock market," Whitmer said. "What matters is that millions of people struggle to get by or don't have enough money at the end of the month after paying for transportation, student loans, or prescription drugs."