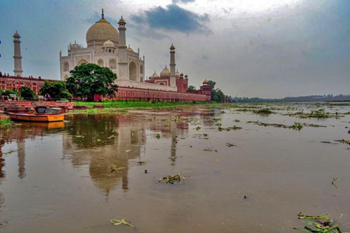 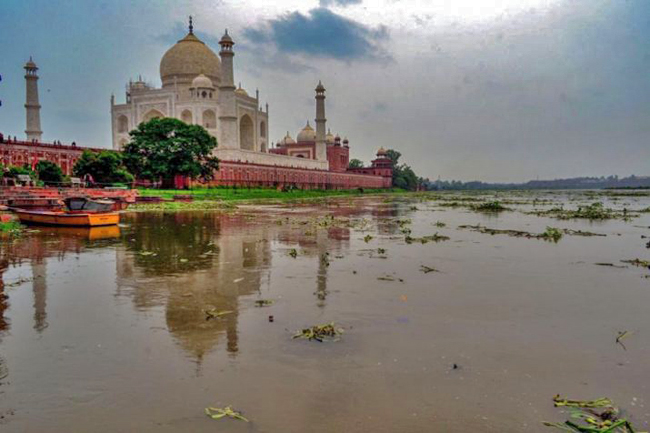 Agra, Jun 25: The inordinate delay in granting permission for construction of a barrage on the Yamuna in Agra, about one-and-a half km from the Taj Mahal, could end up endangering the monument of love.

According to experts, the Taj Mahal is built on massive wooden slippers that have shrunk over the years because of the decrease in the flow of the Yamuna.

"If a barrage is constructed, it would not only add to the life of the Taj Mahal but would also beautify the surroundings with a water front. The matter has been pending clearance and we cannot understand the reason for the delay," said an ASI official who did not wish to be named.

The beauty of the Taj Mahal is no longer reflected in the waters of the Yamuna because the river is almost dry and filled with sewage waste.

The Yogi Adityanath government, in October 2017, had announced a sum of Rs 350 crore for the construction of a rubber check dam.

The Chief Minister had said that "the rubber check dam on the Yamuna will ensure availability of sufficient water in the river throughout the year. Besides addressing water requirement of large number of people in Agra and nearby areas, it will prove to be a milestone in the promotion of tourism".

A senior civic body official said, "A rubber check dam in Agra would have been the first of its kind in the state. It would not only have ensured adequate water supply in the city but also helped in river conservation. The rubber dam, apart from acting as a reservoir, was designed to primarily focus on increasing water flow of Yamuna in order to reduce pollution levels."

Archaeologists and conservationists have already rung the alarm bells on lack of water in the Yamuna. The then BJP MP from Agra, Ram Shankar Katehria, said that a dry Yamuna was a threat to the Taj Mahal.

"Several studies have been carried out on this. There are shafts of wood holding together the foundation of the monument. This wood needs to be moistened by the river's waters to lend strength to the foundation. But the water table below the structure is depleting because of a dry Yamuna," he said.

He said that there are references to ebony shafts that hold together the Taj Mahal's stone and mortar foundation in various books on the historical monument.

According to sources in the state government, a discussion on the barrage scheme began in the union environment ministry in October 2018.

A committee led by representatives from CSIR-National Environment Engineering Research Institute, known as NEERI, wanted the project to be evaluated by Environment Appraisal Committee (EAC) .

The EAC found that the project was more suited for evaluation by another committee which, after its meeting in May, returned it back to EAC.

As the file moves from one committee to another, the Yogi government has also not evinced keen interest in getting its expedited.

A senior Tourism official said, "At the moment we are busy with projects involving Ayodhya and Varanasi and we have not had the time to follow the Agra dam issue. We will do it as soon as we are through with other projects."