Kochi, July 26: A young Muslim writer was assaulted by a group of unidentified youths in the Palakkad district of Kerala for allegedly insulting God in the title of his new collection of short stories. 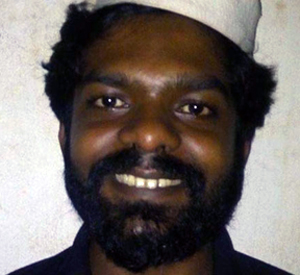 Reports on Tuesday said that 26-year-old P Jimshar was attacked when he was waiting at a bus-stop at Koottanadu in the district.

The writer has landed in a soup since the word 'Padachon' means Allahu (God) in Malayalam.

Based on Jimshar's complaint, the police have registered a case of assault against a man named Jaffar and three unidentified people.

IN his complaint to the police, the writer said that he was waiting for a bus when a man came up to him and said he knew the him.

“He took me a little away from the bus stop and asked, Will you write derisively about Padachon?' Then I was kicked in the chest. Three others also joined him and attacked me. Locals took me to hospital,'' he said.

He, however, added that Padachonte Chithra Pradarshanam has nothing to do with God, and that the title is one of the nine stories in the book.

Guys, dont over react as if you guys follow your scripture 100%!
worshiping idols or pictures, beating inhumanly daliths and muslims for cow, are these in ur scripture?
Nobody has right to take law in their hands, muslims or hindus. Any such or cow issues raise it to police.
I hope its clear to all of u assuming everyone has common sense. Stop targeting based on religion.

Davanagere, Sept 10: A local leader of India National Congress, who had gone missing for the past few days, was found dead at the hill in Basavapatna in Channagiri taluk of Karnataka on Friday.

According to police, Zainullah Khan (40) might have been killed but the investigation is still on.

He was also serving as Mayakonda Assembly Constituency Congress Minority Wing Vice President as well as a Bescom contractor.

Ahmedabad, Sept 17: Enacting Uniform Civil Code and amending the system of appointment of judges are some of the major reforms that are still pending, national president of the BJP Yuva Morcha Tejasvi Surya said here on Friday.

As in the case of abrogation of Article 370, Prime Minister Narendra Modi would deal with these issues successfully, he said during an interactive session at a `Youth Conclave'' organized to mark Modi''s 71st birthday.

"Many legal reforms are yet to be carried out. The BJP tried to bring in judicial reforms in 2014. Neither the Constitution nor the founding fathers had envisioned a system where judges will appoint judges in a very opaque system. No country in the world has an opaque system like this," Surya said in response to a question.

"The PM and then law minister Arun Jaitley made an attempt to change this system and bring in a bill for judicial reforms, which was passed but was later struck down. That is a very important pending reform," said the MP from Karnataka.

"Uniform Civil Code is a very important commitment of this country and our constitutional promise from a very long time, which is also pending," he said.

Electoral reforms were also necessary, Surya said, asking why there could not be a "more foolproof system of voting" based on electronic methods which will "enhance the voting percentage".

There was a proposal that Indians living abroad should be able to vote, he said.

Congress will oppose this because it knows that prime minister Modi is popular among non-resident Indians too, the BJP leader said.

"Imagine if they are also given voting rights, what will be the margin of our victories," Surya said, adding that "revisiting the wrong interpretation of our Constitution" was also needed.

"A lot of civilisational issues need to be addressed," the BJP youth wing chief said, urging filmmakers to indigenize film-making and highlight "local heroes" such as Chhatrapati Shivaji Maharaj and Rana Pratap.

"Please tell the stories which are integrated with the culture of this land. How many more movies will you do about Jodha-Akbar?...Why can''t we make a Rs 100 crore movie on Birsa Munda?" he asked.

"A deeply ingrained colonial consciousness" is troubling all our film-makers, Surya claimed.

"While we see 100 movies showcasing love in the Taj Mahal, why can''t we celebrate the architecture of Bhadreshwara temple or the great temples of Hampi in Karnataka," he asked.

He also slammed Rahul Gandhi about his recent comments where the Congress leader accused the RSS and BJP of not giving women their due.

Modi was the first prime minister to stress the importance of sanitation and "started a movement" of building toilets so that women can attend nature''s call with dignity, Surya said, also mentioning schemes such as Ujala, Ujjwala, priority for women in the Mudra scheme and in house registration under the Pradhan Mantri Awas Yojna.

"These are the important steps the PM has taken to ensure that women are respected, empowered....Our PM feels that the real way to empower is to give highest representation to women in the Union cabinet," Surya added.