Bengaluru, Jan 16: The Congress in Karnataka on Monday promised Rs 2,000 a month to every woman head of households if the party is voted to power in the State.

The announcement was made at a convention attended by Congress leader Priyanka Gandhi Vadra, who said Rs 24,000 a year would be directly credited to their bank accounts under "Gruha Lakshmi Yojana", an "unconditional universal basic income".

The promise comes within days of the Congress making an announcement to provide 200 units of free power every month to each household in the State, where Assembly elections are due by May.

‘Gruha Lakshmi Yojana’ is an attempt of the Congress party to share the "burden of the exorbitant" LPG prices and the "costly daily expenses" that a woman has to bear, the party said.

The Congress wants every woman of the State to be empowered and capable of standing on her own feet and also taking care of her children. The party wants to provide financial independence to each woman of Karnataka, it said.

More than 1.5 crore women would benefit from this scheme, the party said.

Priyanka Gandhi Vadra said a separate manifesto for women would be released in the State and alleged rampant corruption in the BJP-ruled State.

“I am told that the situation in Karnataka is very shameful. I am told that your Ministers are taking 40 per cent commission on jobs,” Vadra said during the women-centric titled ‘Na Nayaki’ (I am a woman leader).

She alleged that Rs 1.5 lakh crore of public money has been looted in Karnataka.

“Think about some development that has to take place in Bengaluru for Rs 8,000 crore and Rs 3,200 crore is going into commission,” Vadra alleged.

“There are shameful scams like the PSI scam where the police posts are being sold. You educate your children, the young boys and girls to get them jobs. Is this what you expect from the people in power?” the Congress leader asked.

She alleged that people have to pay bribes for borewells, driving licences, housing, transfers and almost everything related to government work.

Tejasvi Surya didn’t open emergency door; he just apologised to passengers but was not at fault: Annamalai 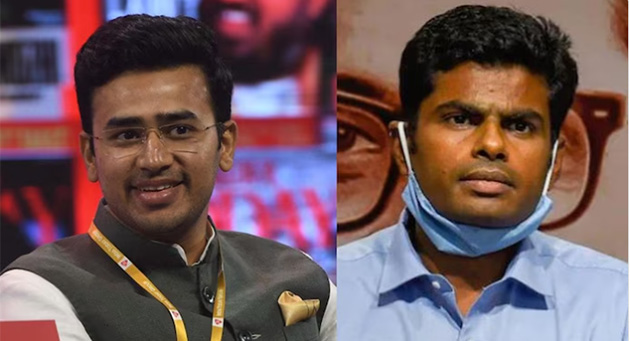 Bengaluru: Tamil Nadu BJP President K Annamalai, who had served as a police officer in Karnataka before taking a political plunge, has claimed that that BJP MP from Bengaluru South, Tejasvi Surya, did not open the emergency exit of an IndiGo aircraft they were travelling in recently.

Surya faced backlash after reports emerged that it was he who had allegedly pulled open the emergency exit of an IndiGo flight before take-off at the Chennai airport in December last year.

Speaking to the media in Chikkamagaluru, Annamalai said that he was accompanying Surya in the flight when the alleged incident took place on December 2, last year.

“After a while, he told me that there was a bleed which had peeled off and there was a gap in the door. I also saw that and alerted the air hostess. Thereafter, she called the pilot and narrated the incident. The pilot had to follow the procedure and he had de-boarded the passengers,” claimed the Tamil Nadu BJP chief.

He further added, “They rectified the problem and fixed the door. Tejasvi Surya had given an incident report on the same. When these kinds of incidents occur, they have to submit in writing about the incident. So, he gave the report in the incident form.”

“Tejasvi Surya didn't pull the door. He travels so much and is educated. Why will he pull the door?” questioned the former IPS officer turned politician.

Annamalai further refuted the media report that stated that the South Bengaluru MP had opened the emergency door and claimed that Surya did not apologise in the incident report. However, the TN BJP chief added that Surya had apologised to the passengers and that Surya was not at fault.

“When he was holding, the door had peeled off. He had also mentioned this in the incident report. Tejasvi didn't apologise, as per media reports. He had written about it. You all know he is an MP, and he is in a responsible position. So, he apologised to the passengers, despite there being no fault with him. Still, the flight was delayed because he was seated there,” concluded Annamalai.

Nanded, Jan 27: A 22-year-old medical student was strangled to death and set ablaze allegedly by her father, brother and three other male relatives over her love affair in Maharashtra’s Nanded district, an official said.

The police on Friday arrested the five for the killing that took place on January 22 in Pimpri Mahipal village under Limbgaon police station, around 600 km from Mumbai, an official said.

Shubhangi Jogdand was strangled to death with a rope by her family members, who later set her ablaze and threw her remains in a stream to destroy the evidence, he said.

The victim was a third year student of Bachelor of Homeopathic Medicine and Surgery (BHMS) and her marriage had been fixed.

However, she informed the man chosen by her family that she was in love with another man from her village, the official said.

The victim's family had been upset after the wedding was called off, he said.

The woman’s father, brother, uncle and cousins took her to a farm on the night of January 22, and they allegedly killed her and tried to destroy the evidence, the official said.

The accused have been arrested under section 302 (murder) and other relevant provisions of the Indian Penal Code, he added.