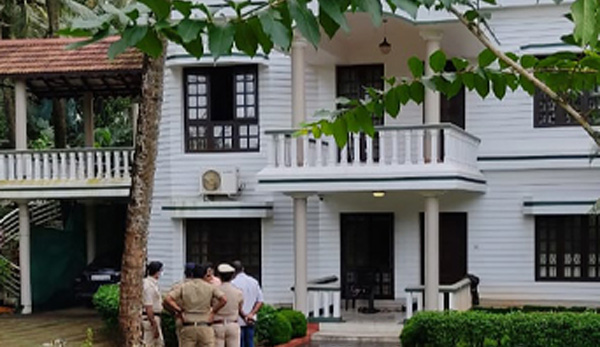 Mangaluru, Aug 4: A team of National Investigation Agency (NIA) visited the residence of former Ullal MLA late B M Idinabba early on Wednesday morning at Mastikatte, Ullal on the outskirts of the city.

The 25-member team was led by an officer of the rank of Deputy Inspector General of Police. The NIA has so far not issued any statement about the visit.

Idinabba, who was also a prominent advocate of communal harmony and unity, passed away in April 2009. His son B M Basha, a realtor, stays in the house along with his family. Basha's two sons stay abroad.

Rumours are doing rounds that the NIA team that came from Bengaluru is conducting investigation based on a suspicion that one of the family members might have some connection with some hardline outfits.

According to sources, Basha’s kin had mysteriously gone missing from Kerala a few years ago. While the family members deny links with any terror organisation, a few media reports had expressed suspicion that the missing person might have joined some terror outfits.

Bengaluru, Oct 14: The Congress' Karnataka unit president D K Shivakumar said he will not blame anyone for the viral video in which former Lok Sabha member V S Ugrappa and media coordinator M A Saleem attributed him to an alleged scam when he was a Minister.

"People have already spoken whatever they wanted. I will not blame the BJP or the media. We only gave others a chance to use us," Shivakumar told reporters here.

He was responding to the queries on the embarrassing video of the purported conversation between Saleem and Ugrappa on Tuesday ahead of a press meet at the party's meeting hall. In the video, Saleem is purportedly heard calling Shivakumar a 'Collection Giraaki' (extortionist), who allegedly increased the 'commission' in irrigation contracts from eight per cent to 12 per cent.

The party suspended Saleem from the party for six years and served a show-cause notice to Ugrappa, who is Congress spokesperson, seeking an explanation in three days. The Congress state chief said the issue related to the viral video was not personal but pertained to a party, which was built by the lakhs of party workers.

Hitting back at the BJP for targeting him following the viral video, Shivakumar said let the BJP take note of what their leaders have spoken against their leader such as MLC A H Vishwanath, C P Yogeshwar, Ramesh Jarkiholi and Basanagouda Patil Yatnal.

"Why the BJP has not yet answered to the charges levelled by Vishwanath, Yogeeshwar, Ramesh Jarkiholi and Yatnal (against former Chief Minister B S Yediyurappa and his family)? Why are they not speaking about collection during the BJP's tenure," the Congress state chief said.

Mumbai, Oct 22: Despite the uproar over Ananya Panday's grilling by the Narcotics Control Bureau (NCB), official sources hinted on Friday that there is apparently no evidence of any 'drug-related exchanges' in her alleged WhatsApp chats with Aryan Khan, the son of Bollywood megastar Shah Rukh Khan.

The sources reluctantly divulged that there are 'no traces or references' of any Marijuana (Ganja) or weed-related chat in the two star kids' WhatsApp communication being scanned in-depth by the NCB.

More likely, Ananya is being questioned for her version by the NCB for some different leads it has collected in the case, but the officials declined to elaborate.

The latest disclosure comes in the wake of certain unconfirmed media reports claiming the emergence of at least three purported WhatsApp chats between the two star-kids allegedly discussing drugs, etc. which the NCB was probing now.

In a surprise addition to the ongoing investigations into the October 2 rave party raid aboard a cruise ship, the NCB 'visited' the home of Ananya Panday and slapped her with a summons.

Acting promptly on Thursday, accompanied by her father and veteran actor Chunky Panday, Ananya went to the NCB and was questioned for over 2 hours by half a dozen officials, and has been summoned again this day (October 22).

The developments came even as a Special NDPS Court Judge VV Patil extended the judicial custody of Khan and 7 others arrested on October 3, till October 30. Khan's bail plea will come up before the Bombay High Court on October 26.

Earlier on Thursday, Shah Rukh Khan had visited Aryan in the Arthur Road Central Jail where he spent a few minutes with him, and later an NCB team 'visited' his Bandra bungalow.

This prompted the veteran Bollywood actress and TV hostess Simi Garewal, 75, to come out in indirect support of Aryan, Ananya and others vide a cryptic tweet: "In a population of 1,397,642,731 - they can only find these 6 or 8 young Bollywood stars to target for drugs??"

Meanwhile, after nabbing at least 20 people to date in the cruise ship raid case, the NCB has not ruled out making further arrests as the investigations widen and progress.