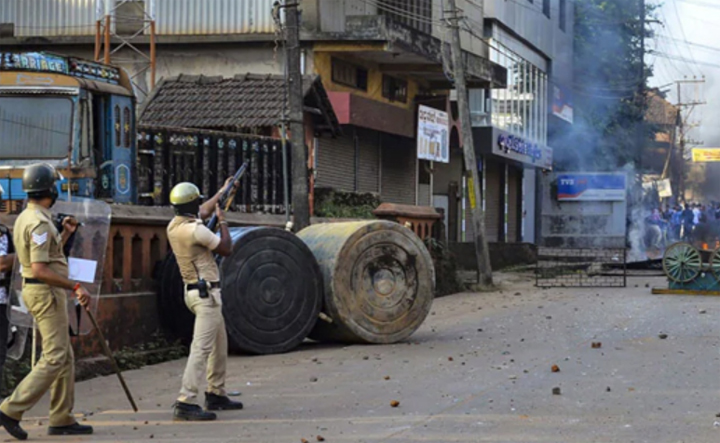 Mangaluru, Dec 5: Almost a year after the ill-famous Mangaluru police firing, which claimed lives of two Muslim civilians, the report of the magisterial inquiry into the incident has been submitted to the Sate Home Department.

G Jagadeesha, the Deputy Commissioner had headed the magisterial inquiry into the incident which took place during anti-CAA protest in Mangaluru on December 19, 2019.

The 50-odd page report, along with 2,500 supporting documents, has been submitted to Additional Chief Secretary of Home Department.

Nausheen and Jaleel, who died in the police firing had no criminal records. According to their family members they had not even taken part in any protest or agitation during the firing.

Due to Covid-19 pandemic and lockdown, the magisterial inquiry into the police firing was delayed.

Shivamogga, Jan 24: A team of police officials, led by Eastern Range IG S Ravi which is probing into the blast incident that claimed the lives of six persons at Hunasodu village near Shivamogga, has discovered that people with political influence have been operating the racket of illegal trade of explosives in the district for the past several years.

A police officer, on condition of anonymity, said the people, involved in the trade, have been bringing explosive materials, including gelatin sticks, dynamites, ammonium nitrate and detonator, in lorries in huge quantities from Tamil Nadu, Andhra Pradesh and other states to the city and selling them to owners of stone crusher units and stone quarries at a profitable price. These facts came to light during the investigation of the accused, the police officer said.

The officer also stated that teams have been set up for the transport and the distribution of explosives. They used to bring more than 10 tonnes of explosives at a time in lorries and park them in the quarries for distribution to the owners.

Later, they used to send them in jeeps to owners of crusher units depending on their requirement. The local youths who have knowledge of explosives used to transport them, he explained.

On blast incident, he said 18 persons were in stone crusher unit at Hunasodu village late on Thursday night. Around three tonnes of explosives had been brought in lorries to the site.

They had loaded the explosives in jeeps and some had left the spot and the others had gone for dinner. The blast took place when six persons were loading explosives in another jeep and all of them died, he added.

The investigation officers have suspected that electric short circuit might have triggered a blast in the site. Bengaluru, Jan 18: Former Indian cricketer BS Chandrasekhar has been admitted to the intensive care unit (ICU) of a private hospital in Bengaluru after suffering a stroke, a Karnataka State Cricket association official said.

Chandrasekhar, 75, had suddenly complained of fatigue and slurring in speech after which he was taken to the hospital on January 15. The former spinner's condition is stable and he will be discharged within two days.

"Former cricketer BS Chandrasekhar admitted to a private hospital in Bengaluru. He is in ICU and is stable," Karnataka State Cricket Association spokesperson Vinay Mruthyunjaya said.

"BS Chandrasekhar is admitted to a hospital in Bengaluru. He was fine and was watching match when he suddenly complained of fatigue and slurring in speech. So we took him to the hospital. He is fine and will be back home in two days," Sandhya Chandrasekhar, his wife told ANI.

The legendary legspinner picked 242 wickets in the 58 Test matches at an average of 29.74. He picked 16 five-wicket hauls during his 15-year-old long career. The leg spinner had made his debut for India in January 1961 and played his last Test in 1979.

Karnataka to get 7.95 lakh vials of covid-19 vaccine in first consignment

Bengaluru, Jan 12: Karnataka will be getting 7.95 lakh vials of Covid vaccine in the first consignment and it will be stored in the government storage facility near Anand Rao circle in the City, Minister for Health and Medical Education Dr K Sudhakar said on Tuesday.

Speaking to newsmen here, he said that the Covi-Shield vaccine has already been approved by the DCGI (Drugs Control general of India). The union government has purchased 1.1 crore doses of vaccine at a cost of Rs 210 per dose. This is the cheapest vaccine in the world.

Dr Sudhakar said that Serum Institute, Pune is supplying vaccines at a cost of 231 crore. Karnataka will get 7.95 lakh vials of Covi-Shield in the first phase. Each dose of vaccine contains 0.5 ml and each vial contains 10 doses of vaccines. Second dose should be given 28 days after the first dose. Vaccine will generate resistance power in the body and it is safe.

‘Not for sale’ is being written over the vial to avoid misuse. Health warriors will get the vaccine on priority. All guidelines will be followed while giving the vaccine. Every person who is vaccinated will be kept under observation for 30 minutes after vaccination, said the Minister.