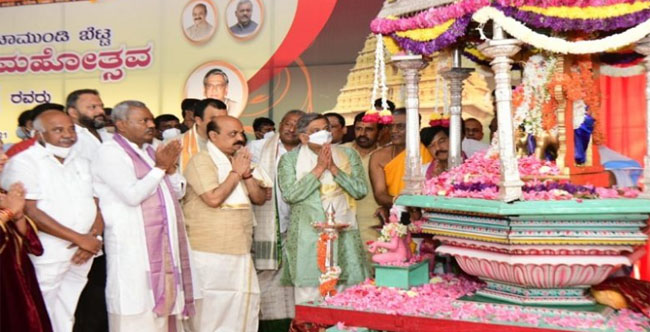 Mysuru, Oct 7: Former chief minister S M Krishna, who jumped from BJP to Congress a couple of years ago, inaugurated the 2021 edition of Mysuru Dasara atop Chamundi Hill today.

Krishna touched upon all aspects of life and nation, ranging from religion, spirituality, human relations, nostalgia, history, heritage, tourism, evolution, achievements, foreign relations, and related them to Mysuru Dasara in his speech at the inauguration.

He spoke after lighting the lamp before the idol of Sri Chamundeshwari, placed in the silver chariot, and offering floral tributes to the deity. Eighty-nine-year-old Krishna recalled his school and college days in Mysuru although he was a native of Somanahalli in Maddur taluk of Mandya district.

Krishna, along with Chief Minister Basavaraj Bommai, District in-charge Minister S T Somashekar, offered 'pushparchane' to the idol of Chamundeshwari Devi that is placed in the Silver Chariot  after the chief priest of Chamundeshwari Temple N Shashishekara Dixit offered puja.

“Mysuru Dasara Exhibition was equally famous like the world famous Dasara itself. We oppose monarchy but we cannot erase the achievements and contributions of great kings of the the Yadu dynasty from the pages of history. Nalwadi Krishnaraja Wadiyar pledged the gold jewels of his family members to construct Krishnaraja Sagar Dam, which helped the progress of the farmers of the region, especially Mandya district,” he said.

He said the government should plan a Dasara package by next year to cover other significant tourist destinations like Badami and Aihole to attract more visitors and to increase the revenue. “Singapore is an example on how a place can progress by proper planning of development and maintaining cleanliness to attract tourists. Mysuru has a similar potential,” he said.

A Congressman for nearly five decades, Krishna who joined the BJP a couple of years back, heaped praises on Prime Minister Narendra Modi. “In my nearly six decades of political awareness, I have not seen a leader with such commitment and dedication towards the progress of India. He has big dreams for the nation and is ably leading by example to take India to new heights. There is a need to give the right direction to the youth of the nation by setting the right kind of ambitions. Hope the Union and the state governments will take steps in this regard,” he said.

Krishna recalled how, Mahatma Gandhi was pleased to see the realisation of his ideals at his native place Somanahalli. “Gandhi was on his way to Mysuru from Bengaluru, in 1934, when he dropped in the hostel established by my father Mallaiah, a member of the erstwhile Praja Pratinidhi Sabha of Mysuru state at Somanahalli. B Venkatappa, a Congressman, explained to Gandhi that two ‘Harijan’ boys were staying together with other boys in the hostel, to attend school,” he said.

As the celebration was a low-key affair this time, only 400 people were allowed to attend the event. A large number of police were deputed atop the hill to ensure security. A few cutural troupes performed on the occasion.

Chawla’s remarks came at a conclave at Air Force Station Yelahanka celebrating the golden jubilee of the 1971 India-Pakistan war victory.

Quoting “declassified” documents that he said were enough to show this, Chawla said: “The thinking started actively after the 1965 war, of how to separate East Pakistan from West. The principal reason was ISI’s interference in northeast insurgencies, particularly arming and training of Naga rebels in the Chittagong hill tracts. We used those lessons when we trained the Mukthi Bahini.”

However, he said, India was weak then as Congress had split and Indira Gandhi had barely held on to become prime minister. “She was called ‘Goongi Gudia’ by the opposition, which didn’t expect her to last long,” he said, adding that in Pakistan Yahya Khan had taken over from Tikka Khan in 1969.

“He (Yahya) actually started this whole story by dissolving the “one unit geopolitical programme” of 1954, by which entire Pakistan was considered one wing to offset the population superiority of East Pakistan, and called for elections in 1970,” Chawla said.

Pointing out that the 1970 elections were the first one-person, one-vote elections in Pakistan, he said Indira Gandhi called for elections one-and-a-half years ahead of the scheduled February 1971 polls.

“Yahya was very firmly entrenched and Gandhi was on a weak wicket. It suddenly changed in December 1970 when Sheikh Mujibur Rahman won 160 seats in East Pakistan and Bhutto only 81 in West Pakistan. Rahman was the natural successor to the prime ministership,” he said.

Stating that the thinking in 1965 was nascent, Chawla inferred that the January 30, 1971 hijacking of an Indian Airlines aircraft to Lahore by Kashmiri separatists may have been a trigger.

“The government of India stopped overflight facilities, preventing them from rearming in East Pakistan. They had to fly over Colombo, which was difficult and expensive. Also, Rahman winning elections and not being allowed to be PM started unravelling the whole plot. In March, once Rahman declared independence, India entered the war in April 1971,” Chawla said.

He added that the comprehensive Indian response included clandestine operations to sabotage shipping in East Pakistan. “It was not just inter-service collaboration, it was the entire government approach under astute leadership. On March 7, Indira Gandhi won a landslide victory that strengthened her position. Several things fell into place and she came to be called the ‘Durga of India’,” he said.

“While we go over individual battles, the most important thing is the immutable principles of war, which almost perfectly followed in 1971. Whether this is being done today or not is for us to judge, but the adversaries are different. Warfare is different and technology has changed everything. We need to look ahead and remember that adversaries, the geopolitical situation, and technology are evolving at an ever faster pace," he said.

Bengaluru, Oct 17: Congress leader BZ Zameer Ahmed Khan has said JDS leader HD Kumaraswamy is not a politician, but a dealer, and he does not do any work without benefits.

"I have seen Kumaraswamy from close quarters. He does not do any work without seeking benefits. It is impossible for the JDS to win by-elections. He has fielded (Muslim) candidates to help BJP.

"It is not politics, it is a deal between JDS and BJP. Kumaraswamy does not do anything without a deal. He is a dealer," he told reporters late yesterday evening at the Bengaluru International Airport.

He was replying to a query on Kumaraswamy hitting out at Opposition Leader Siddaramaiah for orchestrating "political genocide" of Muslim leaders in Congress party.

Further turning on the heat against Kumaraswamy, Khan accused him of collecting money from Byrathi Suresh, an independent candidate, to defeat Iqbal Ahmed Saradagi in the legislative council polls in 2012.

"Who supported Byrathi Suresh? How much money was taken from him? With the help of ex-Chikkanayakanahalli MLA Suresh, the meeting was fixed at UB City flat. How much money was taken then? It was for defeating Saradagi, wasn't it? Doesn't he (Kumaraswammy) know? Siddaramaiah did not defeat Saradagi, but JDS who defeated him. Invite Kumaraswamy for a debate on this," he said.

Kumaraswamy had alleged Siddaramaiah was responsible for the defeat of Saradagi, a protege of senior Congress leader Mallikarjun Kharge, in the legislative council polls in 2012.

Kumaraswamy also had blamed Siddaramaiah for clandestinely working for Byrathi and defeating CK Abdul Rehman, the official candidate of the Congress and grandson of late CK Jaffer Sharief, in the byelection to Hebbal assembly constituency in 2016.

He also held Siddaramaiah responsible for the ouster of Roshan Baig from the party. "The only reason for doing this was that he had questioned the state leadership's poor performance in the last Lok Sabha elections," he added.

Baig himself had blamed Siddaramaiah for his suspension from Karnataka Congress.

Kumaraswamy also had rapped Siddarmaiah for insulting Tanvir Sait, who was making sincere efforts to empower the secular forces in the polity.

The supporters of Sait had protested against Siddaramaiah for serving their leader notice for attempting to forge an alliance with JDS for the Mysuru mayoral election in February this year.

Kumaraswamy had also blamed Siddaramaiah for the six years suspension of MA Salim who had linked KPCC President DK Shivakumar to an irrigation scam as a minister and defended VS Ugrappa who entertained his conversation.