Mangaluru, Jan 23: Mangaluru MLA U T Khader has urged the state government to conduct a high-level study to ensure that major and minor dams, bridges in Shivamogga and surrounding districts are safe following the massive explosion that took place in a stone crusher facility, in Shivamogga.

"Any damage to dams, bridges will have an impact when the region receives bountiful of rainfall in monsoon. There is a need to conduct a study on any cracks in hillocks in the vicinity and ensure that all major installations are safe", he told media persons.

Further, he sought to know whether there was no law and order in CM’s home district. "The police book cases when sand is transported in mini lorries. Why vehicles were not seized when huge quantities of explosives were transported? Whether higher officials from the mines and geology department were not aware of the huge quantity of explosives in quarry sites. Mines and Geology Minister should tender resignation owning moral responsibility," he added.

Khader further stated, "Several houses have been damaged in three districts following the tremors felt after the explosion. The government should disburse compensation for the damages immediately."

Meanwhile, MLC Prakash Rathod said that illegal quarries were functioning in Shivamogga district. "Who should be responsible for the loss of lives and damage to properties following the explosion in stone crusher facility? Nearly 60 villages were affected in the explosion", he added.

As India began new phase of the covid-19 vaccination drive on March 1, registration on the Co-WIN 2.0 portal opened at 9 am. In this phase, people above 60 years and those aged 45 and above with comorbidities will be prioritised.

A user guide for the citizen registration and appointment for vaccination has also been uploaded on the websites of the Union Ministry of Health & Family Welfare and the National Health Authority (NHA).

What can you do on www.cowin.gov.in self-registration module?

How to register for the Covid vaccine?

•    Log on to www.cowin.gov.in
•    Enter your mobile number
•    Get an OTP to create your account
•    Enter the OTP and click on the “Verify" button.
•    You will be directed to the registration of the vaccination' page. On this page, there will be an option to choose one photo ID proof.
•    Fill in your name, age, gender and upload an identity document
•    The page will ask you if you have any comorbidities, which can be answered by simply clicking on 'yes', 'no'.
•    If 45+, upload doctor’s certificate as comorbidity proof
•    Once the details are entered for registration, Click on the “Register" button
•    Once the registration is completed; the system will show the “Account Details"
•    A citizen can further add three more people linked with this mobile number by clicking on the “Add More" button.
•    There will be a button indicating 'Schedule appointment'. Now click on it.
•    Search a vaccination centre of choice by state, district, block and pin code.
•    Date and availability will also be displayed.
•    Click on the 'book' button.
•    On successful completion of booking, you will receive a message. That confirmation details will have to be shown at the vaccination centre.
•    Once the Appointment is fixed, it can be rescheduled at any later stage but before the vaccination appointment day.
•    For this, re-login to the “Citizen Registration" module; with your already registered mobile number.
•    After the first dose, the booking of the second dose will be done automatically.

2 youths dead after mound of mud caves in Puttur 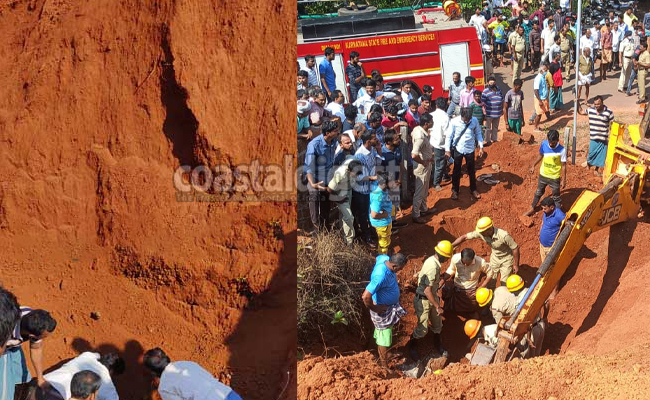 Puttur, Mar 4: Two labourers lost their lives when a mound of mud fell on them while they were working in a chicken waste pit in Dakshina Kannada district today morning.

The deceased have been identified as Ravi (24) and Babu (34), residents of Parkala Colony, Panaje village.

The incident occurred near Arlapadavu in Puttur taluk of the coastal district of Karnataka.

It is reported that the labourers were trying to repair the pipe in which waste of chicken was being dumped. However, the fell into it as the pipe got broken.

As the excavator was also digging mud nearby, the mud slid and fell into the pit burying them alive.

Even though the sleuths from jurisdictional Sampya rural police rushed to the spot and began a rescue operation, they could only find the dead body under the mud.

Chikkaballapur, Feb 26: Officials investigating into the deadly explosion near a stone crusher unit at Hirenagaveli in Chikkaballapur district which claimed six lives suspect that the tragedy could have been triggered by a ringing mobile phone.

As both gelatin sticks and detonators were kept together in the same bag during the desperate bid by employees of the crusher to hide them, any small force was enough to cause the blast.

According to police sources, the forensic experts who visited the spot have raised suspicion that a call received by one of the labourers during the bid to hide the explosives could have caused the tragedy.

“Two victims were already at the spot, before explosives were brought to the spot in the Tata Ace vehicle. The duo had arrived early to ensure a safe hiding place for
explosives.

After they reached the spot, the explosion was either triggered accidentally - when one detonator slipped from the rice bag or due to the ringing of the mobile phone,” a source said, adding that there were cases in the past when gelatin and detonators kept together had exploded all of a sudden.

Sources also ruled out ‘partying’ by labourers before the explosion, noting that no evidence of a campfire was found so far.

There are indications that revenue officials turned a blind eye to alleged illegal quarrying beyond the limits of the crusher.

“The accident occurred adjacent to gomala land. In that land too, quarrying was seen,” a source said.

According to Section 192(A) of the Land Revenue Act, any official who fails to report unlawful occupation of government land and take action can be imprisoned for three years along with a fine.

Prima facie, it is clear that local revenue authorities failed to report the alleged violation occurring right beside the quarry, the source added.