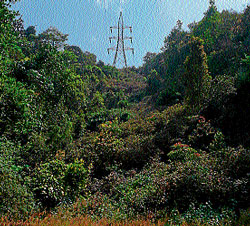 In a press release, he said the proposal of Karnataka Power Transmission Corporation Limited (KPTCL) to run the 400kv D/C high tension power transmission line through the forests of Charmadi Ghats for UPCL thermal power generating station at Nandikur to the receiving station at Shantigrama (Hassan) involves cutting of thousands of trees in the Western Ghats which will irreversibly damage one of the most sensitive forest ecosystems of the region.

The Forest Advisory Committee (FAC) appointed by the Ministry of Environment and Forests (MoEF) while granting forest clearance for laying the transmission lines has clearly stated that “the project proponent shall explore the possibility of laying underground cable transmission system through the corridor (wildlife corridor)........”

He said the Foundation is urging the State government to use the already available advanced technologies for laying underground cables along the road side of Charmadi Ghats for the transmission line outside the forests of Western Ghats as overhead lines.

“The total difference in cost will be marginal if we offset the amount of Rs 20 crores, the Net Present Value (NPV) of the forests earmarked for felling which is already deposited by KPTCL for forest clearance and additional amount for compensatory afforestation elsewhere.”

There is also a need to look into the economics of maintaining the watershed catchment of river Nethravathi where the transmission line is proposed to cut across which is presently not taken into account while calculating the difference in cost for laying overhead transmission line Vs Under Ground Cabling.

The high tension underground transmission cables have been developed for the purpose of avoiding damage to high density forest areas and to avoid other environmental hazards.

The underground cable technology is widely used and has been time tested, he said.