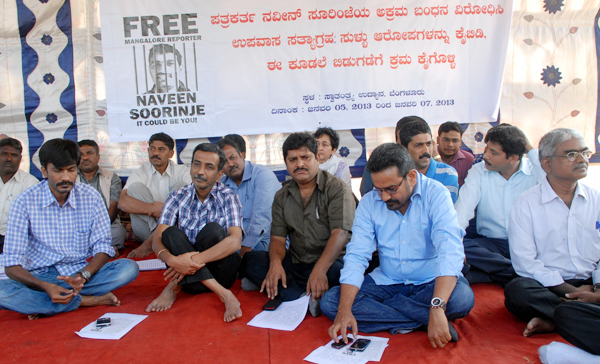 Bangalore, Jan 6: The three-day hunger strike launched by the 'Forum Against Illegal Arrest of Journalists' at Freedom Park in the city demanding the release of Mangalore based TV reporter Naveen Soorinje entered second day on Sunday.

Dozens of journalists and senior editors from a cross-section of print and electronic media outlets have extended support to the ongoing strike.

On Saturday, activists belonging to various human rights and progressive organisations also turned up at the venue to express their solidarity with the cause.

Gangadhar Mudaliar, president of the Karnataka Union of Working Journalists, said the stir is set to intensify over the next few days. “We have instructed all district and taluka-level journalists' bodies to launch similar agitations,” he said.

Mr. Soorinje covering Mangalore district for 'Kasturi Newz 24/7', was instrumental in exposing the July 28 attack by activists of the Hindu Jagarana Vedike on a group of innocent boys and girls who were celebrating a birthday party at a homestay in Mangalore. He was arrested on November 7 by the Mangalore police on charges ranging from “rioting with deadly weapons,” criminal conspiracy, unlawful assembly, and using criminal force on a woman with the intention of outraging her modesty. The police also invoked Sections 3 and 4 of The Indecent Representation of Women (Prohibition) Act 1986. Those present unanimously backed the view that the charges slapped against Mr. Soorinje were a blatant attempt to muzzle the press. They also held that Mr. Soorinje should have been listed as a witness in the case and not an accused as it was his team's footage that had helped the police identify and nab the culprits.

Speaking on behalf of the agitating journalists, editor of Public TV H.R. Ranganath said: “Through this arrest, the State government is sending a message to the journalist fraternity that they will be punished for anti-establishment reportage.”

Ananth Chinivar, editor of Janashree TV said: “It is becoming extremely difficult for journalists to function independently and fearlessly in Karnataka. This [Mr. Soorinje's arrest] has set a worrisome precedent.”

TV9 political editor Lakshman Hoogar said: “Through his reportage Mr. Soorinje exposed the right-wing extremism that has taken strong root in coastal Karnataka. Rashtriya Swayamsevak Sangh-backed groups, such as the Bajrang Dal and the Hindu Jagarana Vedike, are running amok there unchecked by the police as well as sections of the media. Mr. Soorinje is being punished for carrying critical reports on these groups.” Ranganath Bhardwaj, from Suvarna News 24x7, and Badruddin K. Mani, from Kasturi Newz24, were present.

Subhash Rai, senior web editor, Economic and Political Weekly , said this is a case where even journalists have been forced to submit to the government's will.

Subir Ghosh, resident editor of DNA, said: “The state of free speech and expression in Karnataka has degenerated from being unfortunate to downright sorry.”

V. Sridhar, deputy editor of The Hindu , said: “If one cherishes free press, this is a case that is as fundamental as it gets. A journalist was penalised for performing his duty. I am here to show solidarity with him.” 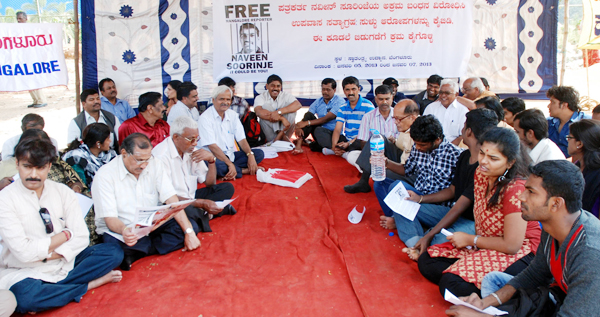 Bengaluru, Feb 3: The government of Karnataka has granted a 50 per cent concession on the payment of pending traffic challan cases, known as e-challan cases.

This one-time measure will be in force till the next state-wide Lok Adalat, scheduled for February 11, 2023.

The government has issued an order in this regard, pursuant to the decision taken at the January 27, 2023 meeting, presided by Justice B Veerappa, Executive Chairman, Karnataka State Legal Services Authority (KSLSA).

The order stated that the meeting had resolved to request the transport department to take steps at the earliest and report compliance in order to ensure access to justice for all. 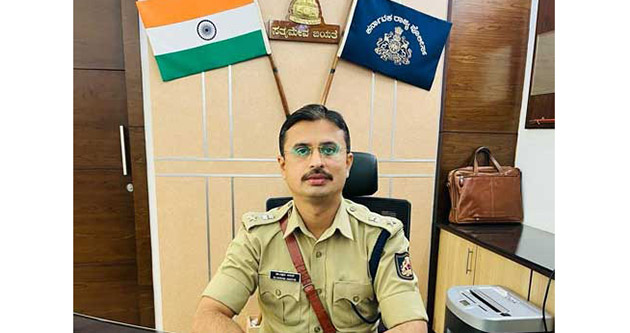 Mangaluru, Feb 4: Dr Vikram Amathe, the new superintendent of police of Dakshina Kannada rural, has issued a warning against those who spread rumours on social media.

Dr Amathe, who took charge as the new SP on February 1, interacted with the media today (February 4) and said that the police would keep a surveillance on bad elements rumours mongers as well as rowdy sheeters.

He said that a social media monitoring cell will be set up in two subdivisions - Puttur and Bantwal  - in the coming days to verify and find reasons behind certain social media posts and rumour mongers would be booked.

When recklessness and unruliness on part of private bus drivers was brought to his notice, the SP said, that awareness would be created among bus drivers and conductors.

“Strict action will be taken on motorists breaking traffic rules, like speeding, moving without insurance, riding around without helmets, triple riding, going the wrong way etc. We are also planning to start counselling on traffic for those who violate traffic rules and habitual offenders.

He said that community policing would be prioritized in the district and warned that police would show zero tolerance towards organized crime which will effect law and order.

“The beat system needs to be reactivated in rural areas as senior citizens live in many isolated places. There are more chances of crime in such areas. We will start the beat system and patrolling in those particular places. As Dakshina Kannada shares the border with Kerala, we will strengthen the check posts in those areas,” he said.

“As election in inching closer, election preparedness will also be on the priority. We will file FIR if hate speeches affect the law and order,” he said.

Dr Vikram Amathe hails from Belagavi. He is a 2012 batch officer who has served in Bellary and Mysuru as DCP admin crime and traffic, Chamarajanagar as additional SP during election, in Dakshina Kannada during MP election, Shivmogga and Belagavi. He had served as a veterinary doctor for four years and SBI technical officer for two years earlier.