Mangaluru, May 3: Hostels, hotels and restaurants have started feeling the pinch of water crisis in Mangaluru as the City Corporation has resorted to supply water once in three days. 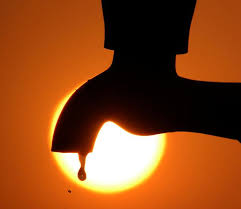 Many hostels and hotels in the city are mainly depend on the Netravati waters supplied from the Thumbe vented dam, where the storage levels have fallen to 5.8 ft against a maximum 13 ft. Though they have borewells and open wells, the water table in them has gone very low.

Already, two prominent medical colleges in this educational hub have partially shut down their hostels and sent hundreds of students their homes till the situation improves.

On the other hand many hotels in the city do not even have water to wash the vessels. Some hotels serving snacks and sweets on paper plate

Swarna Sunder, vice-president, Dakshina Kannada Hotels and Restaurants' Association said that some hotels had introduced eco-friendly bio-plates made from areca-nut sheaths or areca-nut leaf plates. But this did not go down well with many customers who are yet to get accustomed to it.

Mr. Sunder said river Netravathi drying up has hit hotels and lodges in Mangaluru, with the owners of middle-class hotels and restaurants worst hit. Many of them can't even depend on private tankers anymore as many of them are either getting too many requests or have been hired by MCC to supply water.

Meanwhile, the flow of customers to hotels has also increased with the tourist season beginning. Moreover, people who are unable to cook at home due to water shortage also come to hotels, Mr. Sunder said.

All students must boycott the college and plant the trees .

Let the situation worsen.... During mob attacks, only weaker section people used to run away..... Now people from all categories has to run away.... I am also one amongst them.... Let us taste / face the real difficulties of life..... on behalf of the oppressed people.....

So apt .... Be it Water Shortage Food woes Pollution Terrorism This defines our thinking..sad

Never ever seen such water shortage in Mangalore. No tap water, dry wells/borewells this time. Most dependent on water tankers. 1K a day.

Prepare yourself, Mangalore. We ignored the villages. Now water shortage is at our door.

Scenes of water shortage in various parts of country are so scary, everytime I open a tap and water comes out, I feel so much gratitude.
18 retweets 20 likes

Put up a desalination plant around Mangalore, that would solve most of water crisis during summer season....India is of course a rich country...it can afford to spend money required for it....

whoever came to power after independence they made people very poor....

This is the right time that our Government has to set up water DESALINIZATION PLANTS in Mangalore and other parts of Karnataka / India to solve the water crisis.