Cong-JDS coalition is ‘20 per cent commission govt’, says Modi; praises his own govt 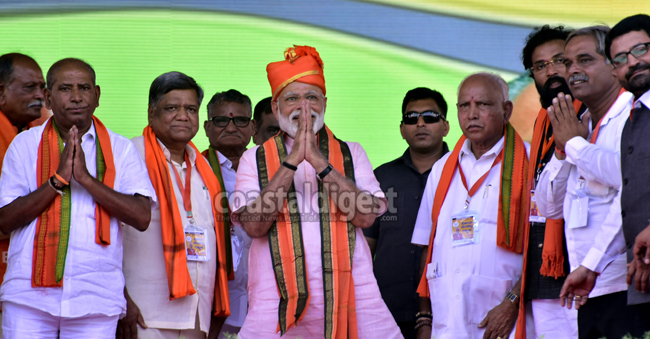 Gangavathi, Apr 12: In a scathing attack on the Congress-JDS government in Karnataka, Prime Minister Narendra Modi Friday dubbed it as a "20 per cent commission government."

Addressing a rally here in north Karnataka, Modi said the Congress-JDS coalition's "only mission is commission", attacking it on the issue of corruption.

He asked whether the Lok Sabha elections was about "nation first or family first," as he attacked the dynasty politics of several anti-BJP parties.

The Prime Minister also drew huge applause when he spoke in Kannada towards the end of his speech, hailing every strata of society and asking them to say Chowkidhar'.

Gandhi has been hurling the "chowkidar chor hai" jibe at Modi to claim irregularities in Rafale deal, while the PM has been calling the Congress chief as 'naamdar' (dynast).

At a rally here to campaign for BJP-Shiv Sena alliance candidates of Ahmednagar and Shirdi Lok Sabha constituencies respectively, Modi said, "You have to decide the country's future and which direction will it take in this election. "You have to chose between imaandar chowkidar and bhrashtachari naamdar. You also have to choose between heroes of India and supporters of Pakistan," he said.

If people compare the Congress-led alliance with the NDA, the latter's "buland irade" (strong intentions) are visible, Modi said. "During the UPA rule, bomb blasts were frequent in which farmers, middle class people and traders were killed. Blasts happened in trains, buses and stations. But under the Chowkidar's rule, where are the bomb blasts," he said. "This is because the Chowkidar has instilled fear in minds of the terror perpetrators that even a single mistake would prove costly for them. The Chowkidar will find them from hell and punish them," Modi said, asking the crowd if it agreed with his policy of eliminating terrorists by going into their territory and killing them.

Modi said the earlier government looked weak "in front of Pakistan and rest of the world". "Our army wanted to take revenge but the (then) government kept quiet. This Chowkidar gave permission (to army) to kill terrorists by going inside their territory. Are you happy with this strong government," he said.

On the National Conference demanding Prime Minister's post for Jammu and Kashmir, Modi said, "the Congress and NCP are supporting those who demand that Jammu and Kashmir have a Prime Minister." "I have no expectation from the Congress since it has stopped thinking about people long ago," he said. "This sin is the creation of that party," he added.

Modi said NCP chief Sharad Pawar had quit the Congress in the name of the country. "Sharad rao, how can you be silent on the two PM demand. Why are you silent? Is this acceptable to you? "Your party's name is Rashtravadi but you see the country through a foreign lens after allying with the Congress again. Is the name Rashtravadi in your party to fool people," Modi said. "How can you (Pawar) sleep despite being from the land of Chhatrapati Shivaji Maharaj," he said. Modi said the Congress wants to scrap the special powers of the armed forces.

Reaching out to first-time voters, Modi said,"those born in the 21st century will be voting for the first time. Do you agree with the weak approach of previous governments and their compromising national security? Is this acceptable to you?" Modi said he has been able to work on various development projects, including farmers welfare, because of people's support. He expressed confidence that the "Modi sarkar" will be re-elected on May 23 when results of the ongoing Lok Sabha polls are declared.

Modi said after being re-elected to power, his government would have a separate ministry for water management.

He accused the Congress-NCP combine of being enemies of farmers. Modi said the Congress needs to be decisively defeated to ensure poverty eradication, modern infrastructure and development of all sections of society.

Continuing his tirade against Rahul Gandhi, Modi linked the IT raids on aides of Madhya Pradesh Chief Minister Kamal Nath, claiming this was "Tughlak Road chunavi ghotala" (election scam). Tughlak Road is the residence of a "naamdar neta" in Delhi where funds are being sent, Modi said. "Child nutrition funds given to Madhya Pradesh government are being used for elections. Habits of the Congress won't go. The Chowkidar is alert and that is why he could arrest the thieves," he said.

The CBDT, that frames policy for the I-T department, had said the department has also detected a trail of Rs 20 crore suspect cash allegedly being moved to the "headquarters of a major political party in Delhi" from the house of an important person who lives on Tughlaq Road, home to many VIPs.

"Searches in Madhya Pradesh have detected widespread and well-organised racket of collection of unaccounted cash of about Rs 281 crore through various persons in different walks of life, including business, politics and public service," it had said.

Cong-JDS coalition is ‘20 per cent commission govt’, says Modi; praises his own govt