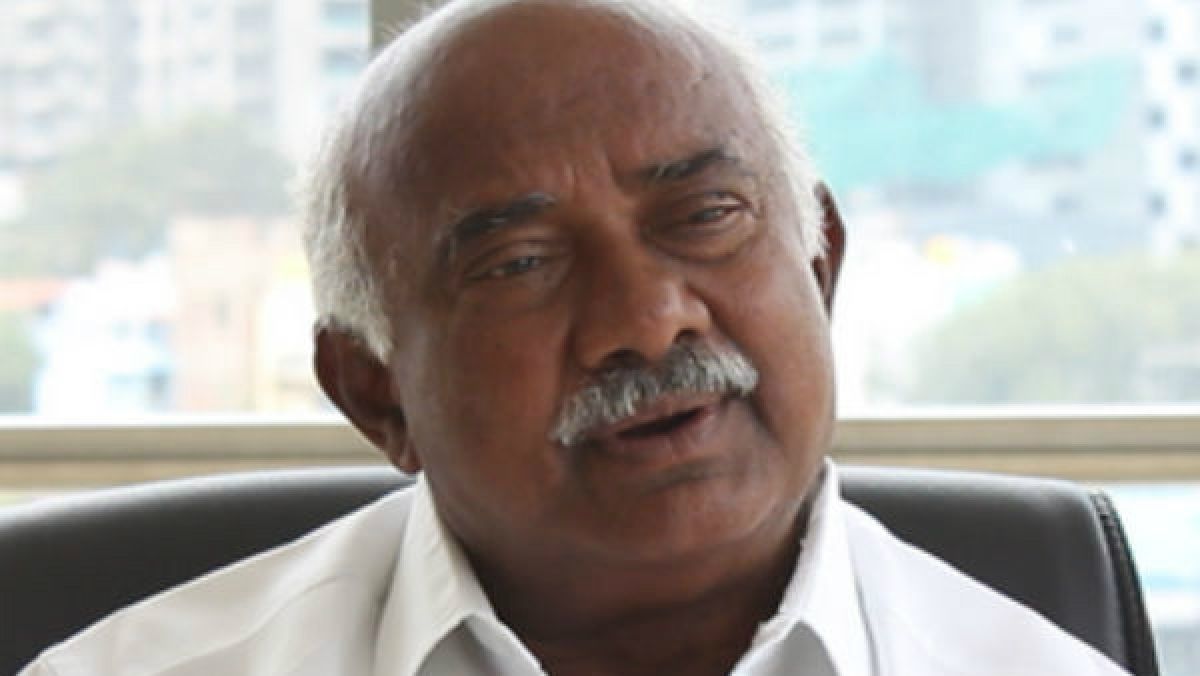 Hubballi, Jan 15: Disgruntled BJP Legislator A H Vishwanath said he would soon release his book 'Bombay Days' a tell-all account of what transpired at Mumbai during 'Operation Kamala-2'.

Speaking to the media here on Friday, he said the book would detail the conversations between Chief Minister B S Yediyurappa and the 17 rebel MLAs.

Stating that the incidents that took place over the past three days have hurt him, he said that the BJP government which came to power in the state based on the sacrifice made by the 17 rebel MLAs has not kept up its word."

The book will spill the beans on all the issues that led to the 17 MLAs rebelling against their parties and what we were assured by the BJP leaders then, he added.

"Court might have barred me from holding a ministerial post, but why wasn't Munirathna made a Minister as promised? What are the credentials of C P Yogeshwar and Arvind Limbavli to become Ministers" he questioned.

Without naming Yogeshwar, he said it is the prerogative of the Chief Minister to include MLCs against whom there are hundreds of cases and stands every chance to go to jail if the court vacates the stay order.

Going soft on Yediyurappa, Vishwanath said the Chief Minister is like a Kamadhenu. However, he doesn't know what is happening around him as his life is in others' hands.

While Prime Minister Narendra Modi is fighting a war against dynasty politics, in Karnataka, the exact opposite is taking place. While one son of Yediyurappa is an MP, another son is super CM and his son-in-laws and close relatives are wielding power.

Vishwanath said he has sought an appointment with Union Home Minister Amit Shah to discuss the leadership issue and political scenario in Karnataka, during Shah's visit to the state. Hope we will get to meet him. 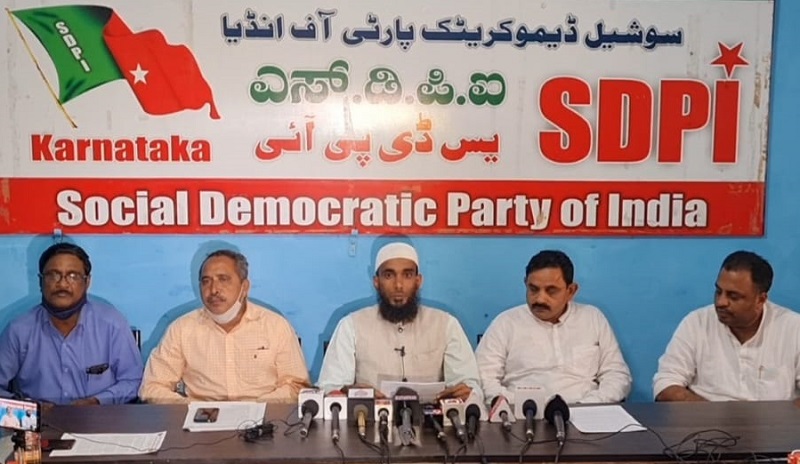 Benngaluru, Feb 26: The National Investigation Agency’s charge-sheet in Bengaluru’s DJ Halli and KG Halli violence case (August 2020) was in fact filed under the supervision and guidance of Sangh Parivar, according to Social Democratic Party of India.

Addressing a press conference today here, Advocate Majid Khan, the vice president of Karnataka unit of SDPI, said that the Narendra Modi government handed over the case to NIA while the Bengaluru CCB was still investigating the case. “As per the direction of the BJP government, the NIA filed an FIR against SDPI in Delhi before start of their investigation itself. In the last six months of NIA investigation, more than 2000 individuals were subjected to interrogation. Most of them were general local people of those areas, few belong to Congress, JDS, AAP, SDPI, etc. It should be noted that, in Bengaluru CCB charge-sheet Congress leader Sampath Raj and other congress corporators, a few leaders of the JDS and SDPI were named”

“In NIA charge sheet it is mentioned that, both Fairoz (a former Congressman and presently in AAP) and Naveen (an activist of the Sangh Parivar), used to post anti-religious statements regularly on social media. Naveen had uploaded derogatory content against Prophet Mohammed (SA) on social media in response to Fairoz post. However, Naveen was released on bail as he was booked under simple IPC sections. Whereas, Feroz was booked under the UAPA along with other Muslim youths. Investigators have claimed that the Facebook posts of these two persons were the main cause of the violence. However, at the same time they have exhibited communal discrimination.”

“Former Mayor Mr Sampat Raj and other congress corporators were given clean chit by NIA, whereas Bengaluru CCB had called them as the masterminds of these incidents. Even till date MLA Akhanda Srinivas Murthy believes Sampat Raj as the main person involved in this conspiracy”

He said: “From the day one, NIA was investigating the case focusing only on SDPI. We can see similarity of framing and accusing many Dalit leaders, human rights organization and anti-CAA activists under UAPA cases across the nation. Hundreds of students and activist have been arrested in Delhi under sedition case just because they had participated in anti-CAA and anti-NRC protest.”

In an independent investigation report released by retired Justice Nagamohan Das on the Bengaluru violence, he has clearly mentioned that main cause of the violence is the failure of the state government, its intelligence department, he said accusing the investigation agencies of wilfully targeting SDPI and people of a particular community.

“Since the beginning we have been demanding the state government to order an impartial enquiry under the supervision of a High Court judge. Now, it is clear that investigators have been pressurized to target SDPI and people from a particular community,” he said.

Karnataka: MLA removes shirt during assembly session to protest against BJP, gets suspended for a week

Bengaluru, Mar 4: Congress leader and MLA B K Sangamesh has been suspended from the Karnataka Legislative Assembly for one week after he removed his shirt in protest during the session today.

Sangamesh, who represents Bhadravathi constituency, will not be allowed to attend the Assembly till March 12.

This happened when Congress MLAs were staging a protest in the well of the House against Speaker Vishweshwar Hegde Kageri’s decision to hold a special discussion on ‘One Nation, One Election’.

Sangamesh removed his shirt while he was in the well of the House, angering the Speaker. “What is this? Are you on the streets? Get proper or I’ll have you thrown out. What you’re doing is an insult to the people of Bhadravathi who have elected you,” Kageri screamed.

Congress’ DK Shivakumar and JN Ganesh rushed towards Sangamesh and made him put his shirt back on.

Law Minister Basavaraj Bommai then moved a motion to suspend Sangamesh till March 12 for “indecent and disrespectful behaviour.” The motion was passed on a voice vote.

Speaking to reporters, Sangamesh said he wanted to draw the Speaker’s attention to how the BJP was allegedly targeting him and his family with false cases.

“The BJP has been losing election after election in Bhadravathi. They’ve not been able to win even local body elections. So, they’re attempting to divide people on communal lines just like what they did in the coastal region. My family and I are being targeted with false cases of attempt to murder and committing atrocities,” he said. Bengaluru, Mar 2: The Karnataka High Court on Tuesday refused to stay the proceedings initiated against actress Kangana Ranaut by a Judicial Magistrate First Class (JMFC) at Tumkur, which had on October 9, 2020, directed the jurisdictional Police Station (Kyathasandra) to register FIR against her for her tweet on farmers opposing the agri laws.

Ranaut had moved the Karnataka High Court seeking to quash an First Information Report registered against her. Justice H P Sandesh granted one week time to the petitioner to comply with office objection and posted the matter for further hearing on March 18.

Advocate Rizwan Siddiquee appearing for Ranaut sought for a stay on the proceedings initiated. To which the court said, "First you comply with the office objection then only we can consider your submissions."

The complaint was filed by advocate Ramesh Naik L under Section 156(3) of the Code of Criminal Procedure alleging that Ranaut has posted a message from her Twitter account '@KanganaTeam' on 21st September 2020 saying: "People who spread misinformation and rumours about CAA that caused riots are the same people who are now spreading misinformation about Farmers bill and causing terror in the nation, they are Terrorists. You very well know what I said but simply like to spread misinformation".

The plea alleged that the above content posted by the accused in her Twitter account has a clear intention to injure the people who are opposing the Central laws, wantonly giving provocation with intent to cause riots and promote the culture of non-violence in the young minds of society.