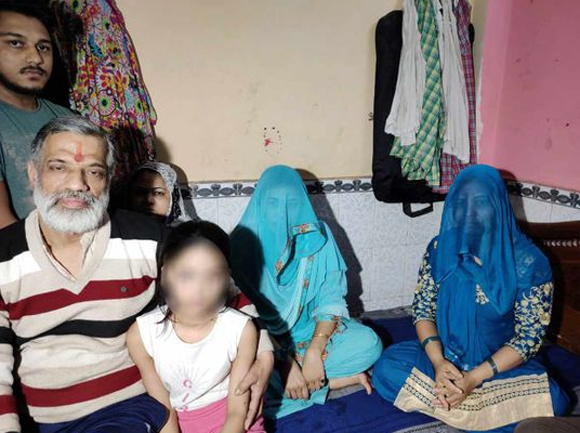 Suhaana shuddered with fear as she heard violent banging on her door on Sunday. The atmosphere was charged with communal tension after thousands of ruthless goons supporting contentious Citizens Amendment Act (CAA) launched a bloody onslaught against Muslims in the capital of India.

The family consists of Suhaana (name changed), her partially paralysed husband and two daughters. They are the only Muslim family in Madhuban mohalla of North Ghonda locality in north-east Delhi.

Hearts pounded louder than pounding of the door. Then the banging stopped and noises of men talking loudly came.

"I peeped out from a small window near the kitchen and saw our neighbours standing outside our entrance and arguing with 10-15 unknown people," Suhaana said.

It was the first day of the communal violence, worst in the decades, that fanned out to the entire north-east Delhi over the next three days and claimed at least 42 lives, left over 200 injured and properties worth crores destroyed. The death toll is feared to go up.

Later in the night Suhaana's family moved to one of their Hindu neighbour's house. There are about 30 Hindu households in the mohalla who kept vigil as the atmosphere deteriorated.

The next day, the violence escalated. The neighbours decided to shift Suhaana 's family to Gautampuri for their safety.

Suhaana recounted, "Our neighbours assured us that they are with us but as things were deteriorating, they said they wouldn't be able to protect us if a big mob of hundreds came. They advised us to move to the nearby Gautampuri locality and come back only after things become normal."

Rajkumar Bharadwaj brought the family to Gautampuri in the early hours on February 25.

Anil Gupta, 49, said, "It was tough to rescue them. We were asked by the rioters as to why we were saving the Muslims. But we had to, it is the people of my country who are suffering. It cannot be Hindus or Muslims."

Rajkumar Bharadwaj said, "Their youngest clung to me throughout. After I brought them here at Gautampuri, I felt good. Situation till then was not okay."

On Saturday, some semblance of normalcy returned to parts of north-east Delhi with some people opening their shops amid heavy police presence.

Meanwhile, the morbid sight outside GTB Hospital's mortuary, agonising groans in the hospital wards burnt down houses and shops remind Suhaana and others what they have been spared of.