Congress snubs Digvijaya Singh for speaking out of turn 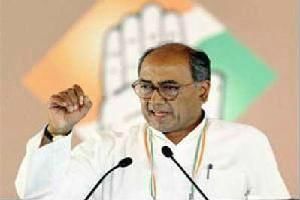 New Delhi, June 19: Congress on Monday snubbed Digvijaya Singh, saying that its most vocal general secretary was not authorized to speak on the party's behalf.

"Digvijay Singh is not officially authorized to speak on behalf of the party," the AICC said in a media release. The unusual statement was seen as reflection of the leadership's annoyance with the senior leader, who has been quite voluble in the first three years of UPA-II.

The announcement, virtually saying that Singh speaks for himself, came two days after he in a TV interview called the Trinamool chief Mamata Banerjee "erratic" and "immature", and was being seen as an attempt to mollify the estranged West Bengal CM. Singh had also blamed Banerjee for embarrassing both the Congress president Sonia Gandhi and Prime Minister Manmohan Singh.

Sources said that the party leadership was upset with the office-bearer for saying in the same interview that the party could consider backing Vice-President Hamid Ansari for a second term, emphasizing that the party was yet to form a view on the matter.

The tough talk on Banerjee did not gel with the Congress's attempt to give fresh provocation to the Trinamool chief. Although the ties between the two parties have strained since the Congress defied Banerjee to name Pranab Mukherjee as its Presidential candidate, the party at the same time does not wish to lose the support of her 19 members in the Lok Sabha since a split would enhance its dependence on the Samajwadi Party (SP).

However, the irrepressible general secretary made light of the party's statement emphasizing that his views should not be confused with those of the party. "The media cell of AICC has clarified that I am not the party spokesman. When did I claim I am the spokesman? What the media committee has said is true". Asked whether the extraordinary party statement was a put down for him for deviating from the party line, he retorted: "You must be joking."

This is not the first instance when Singh with his outspokenness has run afoul of the party's insistence on maintaining silence and discretion on sensitive matters. The remarks of the general secretary, who has worked closely with Rahul Gandhi, on the Batla House encounter as well as his attack on Union home minister P Chidambaram for the government's anti-Naxal policy had annoyed many in the party and the government, while providing both ammunition and mirth to opponents.

During the peak of Anna Hazare's anti-graft campaign, Singh had frequent run-ins with the civil society faction. Many in the party criticize him also for frequently wading into issues which are outside his organizational responsibility.

When asked about the announcement, Congress spokesman Manish Tewari suggested such statements were reflective of the party directive. Tewari also struck a conciliatory note towards Banerjee, appealing her to support Mukherjee in the July 19 Presidential election. He also dubbed as "resting on erroneous assumption" questions over Congress's options if Banerjee walks out of the alliance.

Tewari also pointed out that Mukherjee has described the Trinamool Congress chief as his sister and had made a personal appeal to vote for him in the presidential election. Replying to a query, Tewari dismissed as "very hypothetical" questions regarding the SP joining the UPA ahead of the Presidential election and said "our appeal to all parties is for support to Mukherjee's candidature".

Congress snubs Digvijaya Singh for speaking out of turn