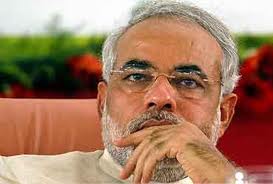 Nagpur, June 20: Rashtriya Swayamsevak Sangh (RSS) Chief Mohan Bhagwat Wednesday backed Gujarat Chief Minister Narendra Modi as a candidate for the prime minister's post and said that the country should have a PM who propounded Hindutva.

"To keep alive the Hindutva ideology, the Hindu 'samaaj' (society) should come together. And the country should have a prime minister who believes in that ideology or propounds that view," Bhagwat told reporters here.

Bhagwat's comments came a day after Bihar Chief Minister Nitish Kumar hit out at Narendra Modi without naming him and said that the National Democratic Alliance (NDA), led by the Bharatiya Janata Party, should announce a secular prime ministerial candidate for the 2014 Lok Sabha elections.

Nitish Kumar Tuesday made it clear that Modi is unacceptable as an NDA candidate for prime ministership.

"Will Nitish decide what sort of person makes a good PM?" Bhagwat questioned.

He also slammed Nitish Kumar and said that he is scared to call himself a Hindu.

The Nitish-Modi rivalry has been on a high for the past few days. Modi took a dig at politicians from Uttar Pradesh and Bihar for what the Gujarat chief minister called "resort to caste-based politics".

Nitish Kumar then said that Modi, who has been a constant irritant in the JD(U)-BJP coalition ties in Bihar, should mind his own business instead of making comments on others.