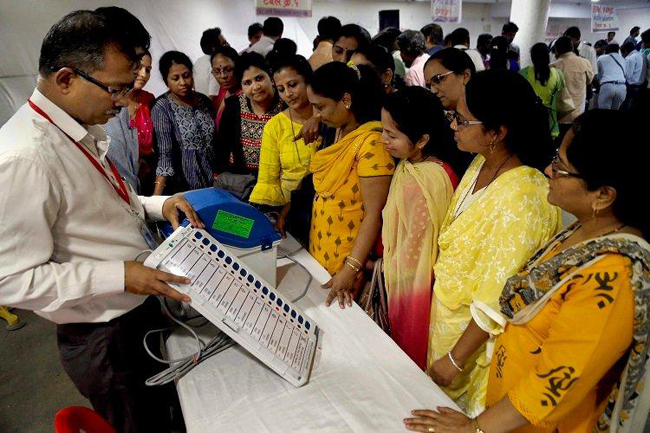 Bengaluru, May 19: Polling began on Sunday in Karnataka's two assembly segments -- Chincholi and Kundgol, amid tight security, an official said.

"Voting began at 7 a.m. in 241 polling booths in Chincholi and 214 polling stations in Kundgol where 3.83-lakh electorate are enrolled to exercise their franchise," a poll official told media.

Of the total booths, 60 have been declared critical in Chincholi and 25 in Kundgol.

The polling will end at 6 p.m.

As many as 25 candidates, including 4 women are in the fray for the twin by-elections.

"A total of 1,016 polling and police personnel are conducting the by-election in both the seats under tight vigil," added the official.

There are 17 candidates in Chincholi in Kalaburagi district and 8 in Kundgol in Dharwad district.

Prominent candidates for Chincholi are Avinash Umesh Jadhav of the Bharatiya Janata Party (BJP), Subhash V. Rathod of the Congress and Gautam Bomnalli of the Bahujan Samaj Party (BSP).

Avinash is the son of Umesh Jadhav, whose resignation from the seat as a rebel Congress legislator necessitated the by-election.

In the Kundgol contest, Kusumavati Channabasappa is contesting from the Congress against SI Chikkanagoudar of the BJP. The remaining 6, including a woman are Independents.

Death of Congress Minister for Municipalities C.S. Shivalli on March 22 necessitated the by-poll. The Congress has fielded his widow Kusumavati to retain the seat on sympathy vote.

A three-time legislator, Chikkanagoudar lost to Shivalli by a narrow margin of 633 votes in the May 2018 state assembly elections.

Vote count is on May 23 along with that of 28 Lok Sabha seats for which polling was held in two phase on April 18 and April 23 after a hectic campaign.