Mangaluru: 3 miscreants held for attempt to disrupt peace near mosque 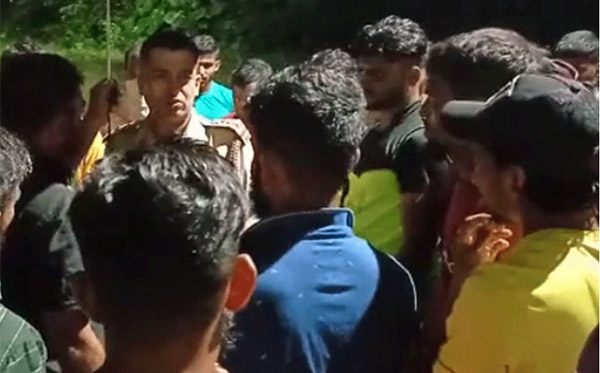 Mangaluru, Nov 15: The police have detained three miscreants attempting to create nuisance near Tajul Ulama Jumma Masjid at Subbaguli in Kurnad near Konaje on the outskirts of Mangaluru.

It was said that the three youths allegedly raised 'Jai Sri Ram' slogans and attempted to damage the mosque on Sunday night.

The Konaje police have detained all three persons. The police are verifying the antecedents to the incident. The investigation is in progress. FIR will be registered at the Konaje police station.

Mangaluru, Jan 9: Karnataka BJP President Nalin Kumar Kateel accused the Congress of failing to respect the law of the land implemented in the interest of public health when the Covid-19 cases are on rise in the state.

He flayed the padaytra being organised by the Congress demanding the implementation of the Mekedatu project.

"The Congress has no respect for the law of the land. For the sake of leadership, KPCC President D K Shivakumar is carrying out a “padayatra drama.” The citizens of the state are watching the move of the Congress and will teach a befitting answer to the Congress in the coming days," he said.

"There is a case in the Supreme Court pertaining to the Mekedatu project. Once the case is solved, the state government will take steps towards the project. The Congress has no concern for the people of the state. Had they had any concern, they could have spoken to their counterparts in Tamil Nadu to solve the row over the Mekedatu project," said Kateel.

"Inspite of the fact over the case before the court, the Congress is organising a padayatra to give a wrong message to the people of the state. People are well aware of the political motive behind the padayatra. Why did the Congress-led government under the leadership of Siddaramaiah fail to move forward the Detailed project report (DPR) of Mekedatu between 2014 and 2018?," Kateel sought to know.

"The BJP government in the state had implemented a few rules to check the spread of Covid-19. Unfortunately, the leaders who ruled the state in the past are violating the rules. This shows the culture of the Congress. The Congress has no concern for the health of the people," Kateel said.

Some politicians are curse to us. That is the main reason, now a days decent people avoid joining politics. More and more criminals joining politics. Once in West Bengal, when CM of that state took precautionary measures, a politician gave a statement that, "Corona has gone. Mamata Banerjee is acting and imposing lockdown so that BJP can't organise meetings and rallies in the State. No one can stop us,"

Mangaluru, Jan 8: Coastal district of Dakshina Kannada today woke up to covid curfew as per government guidelines after months of relaxation.

The law enforcers started the preparations in the morning itself as they vowed to crack down on violators of the curfew, which is aimed at curbing the spread of Covid-19.

The weekend came into across the state last night and will be in force till 5a.m. on Monday.

As per guidelines, except emergency, grocery, food items sales and parcel service in hotels, no other services are allowed. Government, semi-government and corporation offices which offer emergency services will be open.

Both the government and private bus services remained unaffected in the region and people were seen travelling one place to another.

However, thanks to strict police patrolling prominent streets in Manglauru were partially deserted.