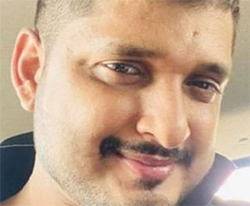 Mangaluru, June 6: Four persons were arrested by the Mulki police today in connection with the murder of Abdul Lateef, a 38-year-old businessman.

The arrested are: Mohammed Hasim (27), Nissar alias Riyaz (33), and Mohammed Razim (24), all residents of Mulki, and Aboobakar Siddique (27), a resident of Udupi.

The weapons and vehicles used for murder have been confiscated. Investigation is in progress to find out the motive behind the murder and the arrest of remaining accused.

Abdul Lateef, his father-in-law Muneer, latter’s son Ijaz and relative Imran were returning from Vijaya Bank at Mulki when a gang of nine miscreants waylaid their car and attacked with sharp weapons.

The gang comprised of Hakeem, Wafa, Asim, Siddique, Nissar, Bava, Farhan, Razeem and Siddiq.  While four of them are arrested, police continued hunt to nab other accused.

Abdul Lateef breathed his last while being taken to hospital. Others are undergoing treatment at a private hospital in Mangaluru.