Not even a single BJP MLA will join Cong after May 23: Yeddyurappa

Kalaburagi, May 14: Opposition Leader in the Karnataka Legislative Assembly B S Yeddyurappa, who is also BJP State President, today ruled out possibility of BJP Legislators joining Congress after May 23. 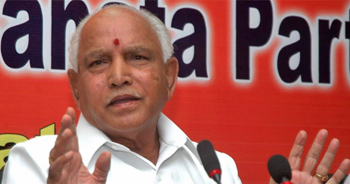 Referring to AICC General Secretary and party incharge of Karnataka affairs K C Venugopal's claim, he said that " no single BJP MLA will join the Congress or any other political party".

Addressing a press conference here on Tuesday, Yeddyurappa said that “after May 23 when Lok Sabha election results are announced, more than 20 Congress MLAs who are not happy with Chief Minister H D Kumaraswamy, will not continue in Congress and they wanted to join BJP."

Yeddyurappa’s statement comes in the wake of Venugopal asserting that many BJP MLAs in Karnataka will join Congress after May 23, when results of the seven-phase general elections will be declared. "We are not going to poach any MLAs from BJP but on their own they will join Congress".

Yeddyurappa expressed confidence of his party candidates clinching from Congress the Kundagol and Chincholi seats by winning the byelection."

Not even a single BJP MLA will join Cong after May 23: Yeddyurappa