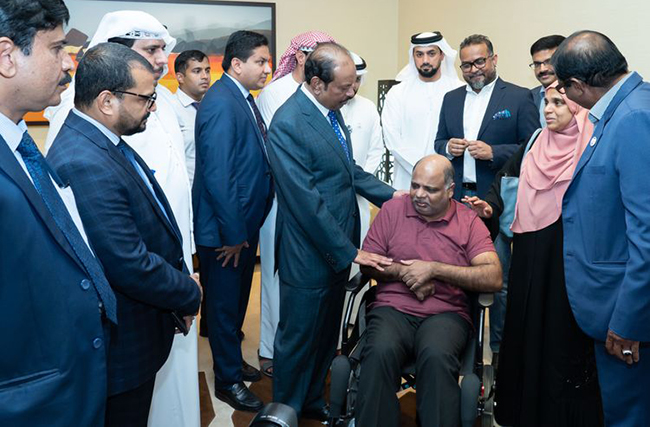 Kasaragod, Oct 19: An NRI businessman, trapped in 28 legal cases in United Arab Emirates, coupled with several health issues, has finally returned to India after 15 years, thanks to financial and legal support by Indian businessman Yusuffali MA, chairman of Lulu Group.

Moosakutty Puzhakkara, a native of Pattambi, Kerala, had a travel ban which confined him and his family to a dingy one-room home in Ras Al Kahimah for more than a decade with almost 50 per cent paralysis.

Moosakutty was an office boy in Abu Dhabi who managed to save up enough money to launch a business, but the past decade had been tragic for him.

After month-long legal proceedings and interaction with all relevant government stakeholders, including His Highness Sheikh Saud bin Saqr Al Qasimi, Member of the Supreme Council and Ruler of Ras Al Khaimah, Yusuffali was able to finalise an early settlement of his debts and legal issues.

As per the court ruling, Yusuffali paid Dh400,000 as final settlement and facilitated the travel back home of Moosakutty and his wife on Friday.

"I was moved by Moosakutty's miserable health and living condition. The challenge was to get settlements in more than 28 court cases as soon as possible. All other relevant authorities helped speed up proceedings which resulted in the lifting of the travel ban and the return of Moosakutty to his home and family in India. I sincerely wish and pray that Moosakutty recovers fast and has a happy and prosperous life ahead with family and loved ones," said Yusuffali.