Rain brings respite from heat in DK, Udupi; likely to continue for till Apr 26 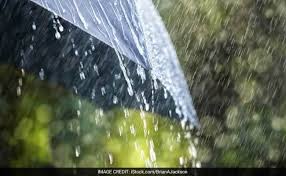 Mangaluru/Udupi, Apr 24: Moderate rains lashed parts of Dakshina Kannada and Udupi districts in Coastal Karnataka last evening providing the people a respite from sweltering heat which they were experiencing for the last few weeks.

Sullia, Guthigar, Madappady, Kallaje and surrounding areas in Dakshina Kannada received rain even as there was cloudy weather in the entire district. According to India Meteorological Department, rain is “very likely” in Dakshina Kannada till April 26.

In Udupi city, it started raining around 5.25 p.m. and lasted about 20 minutes. Later, there was a drizzle for some time, before it stopped raining.

But the sudden rain caught people unawares. While some managed to take shelter from the rain in their umbrellas, those who had not brought them had to run to nearby places to take shelter.

Trees got uprooted in different places in the district due to heavy winds. The roof of a weekly market building was damaged when a tree fell on it at Mudrady village.

Some trees fell on Muniyal-Varanga Road and disrupted traffic there. An arecanut tree fell on a house at Chitpady here.

Personnel from the Forest Department rushed to the spot and cleared the trees. The flex boards of some shops were carried away by the heavy winds, which also damaged the big umbrellas under which street-side vendors sell their wares in the surroundings of Kaup.

Rain brings respite from heat in DK, Udupi; likely to continue for till Apr 26