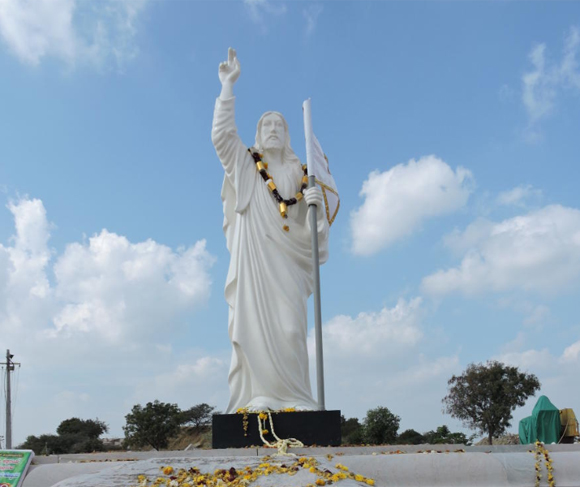 Bengaluru, Jan 13: Right-wing organisations, along with BJP and RSS workers, will take out a massive padayatra in Kanakapura on Monday, protesting against the construction of a Jesus Christ statue.

The event organised by the Hindu Jagarana Vedike (HJV) will witness a rally from the Aiyappa temple in Kanakapura to the taluk panchayat office, where a memorandum will be submitted to the authorities following a public meeting.

Ahead of the event, Congress leader D K Shivakumar, in a video message released on Sunday, urged the people of Kanakapura to maintain calm. The former minister cast apprehensions over the event scheduled on Monday and said provocative statements may be made to disturb peace and harmony in Kanakapura.

Shivakumar, who represents the Kanakapura constituency, said the motive of the meeting by the leaders and workers of the BJP and the RSS, along with seers of mutts, was to defame his constituency.

“If any remarks are made against me, my brother (D K Suresh) or people of different faiths in Kanakapura constituency, do not be provoked,” he urged.

“Members of the (Christian) community have prayed at the site for 400 years and are trying to install a statue of Jesus Christ. I have helped the community like I aided hundreds of temples and educational institutions,” he said.

Appealing to maintain peace, Shivakumar said that BJP and RSS leaders were free to petition anybody.

The BJP and right-wing organisations have objected to the construction of the statue at Kapala Betta, with the BJP government ordering a probe into how road, power supply and other facilities were provided to the hill. Recently, Christian leaders had petitioned Chief Minister B S Yediyurappa to remove any impediments to the construction of the statue.