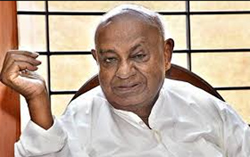 In a statement issued here here, Mr Muniyappa said that party which had an electoral understanding in the Lok Sabha elections, may extend support to Gowda in the June-19 Rajya Sabha elections from Karnataka.

It may be recalled that the Election Commission of India, is conducting elections to Rajya Sabya to fill four vacancies from the Karnataka Assembly, in which the ruling BJP may bag two seats, while the remaining may be won by the Congress and the JD(S).