Kundapura Devadiga Mitra (KaDaM) will be celebrating their 9th anniversary on Friday the 15th of November, 2019 from 10 am in Habitat School Auditorium, Ajman.

President of KaDaM, Dinesh Chandrashekar Devadiga Nagoor has invited all the Community members of KaDaM to come in large numbers and be part of the celebrations.  Dinesh who is the Managing Director of Elegant Group of Companies is the main sponsor of the program.

Mahaligna Devadiga Uppunda, AGM of Corporation Bank, Bagalkote has agreed to preside the programme as Chief Guest with other dignitaries who will be arriving from India to grace the occasion.

Nagaraj D. Padukone, Businessman and Social Worker of L.G. Foundation, Padukone will be honoured with ‘Devadiga Sadaka Prashasti’ Award during the occasion.

Karnataka Rajyotsava Awardee 2019, B.G. Mohandas who is the founder of Gulf Kannadiga.com and also the honorary advisor of KaDaM will be honoured during the programme.

Ln. B G Mohandas, became the first Byndoorian to get State Rajyotsava award this year and the 4th Gulf Kannadiga to be awarded the award.  Ln B G Mohandas was the zonal chairman Lions Clubs (1987-88).

He was the general secretary of Manipal Jaycess before migrating to Gulf in 1982.

He was awarded Out Standing Alumni of MCOPS, Manipal University in 2002. He is also a Winner of prestigious awards like Vishwa Manava award and First Da Ra Bendre Award by Karnataka Sangha Abu Dhabi and Mayura Award by Sharjah Karnatka Sangha.

He joined Lions Club of Manipal in 2014 and became its president during the Lionistic year 2015 – 2016. He was a 100% President and has won District Governor’s Appreciation Award. He has been felicitated by LC Gonikoppal and LC Biagama, Sri Lanka.

The special attraction of the day is a grand Yakshagana Ballet ‘Kusha Lava Kalaga’ which will be presented by Shree Kshethtra Maranakatte Shree Brahmalingeshwara Yakshagana Mandali for the first time in UAE.

The artistes comprise of Ravi Devadiga Soralu as Bhagavathar, Chethan Acharya in Chende, Mahabaleshwara Gowda in Maddale with participants Irabailu Ananda Shetty as Rama, Sheena Devadiga Nagoor as Shatrughana, Kolali Krishna Shetty as Kusha, Vaataru Raveendra Shetty as Lava and Shekar Shetty Yelaberu in a comic role.  Sheena Devadiga Nagoor will be conducting this ballet which will start around 2 pm after lunch. 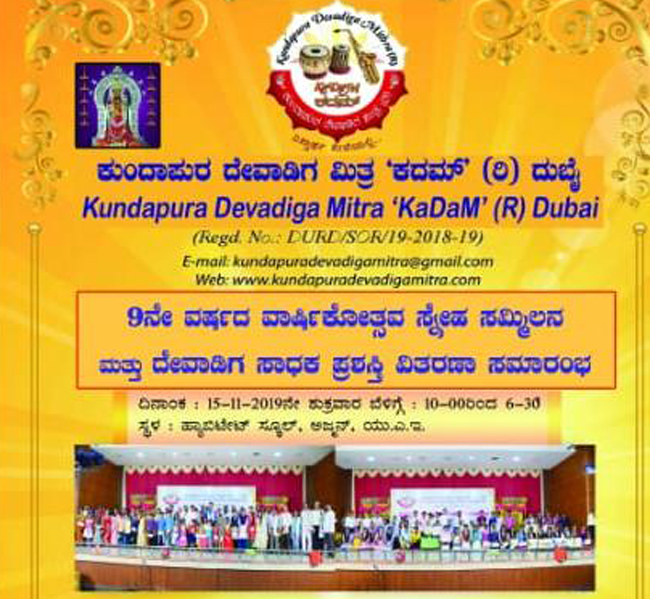