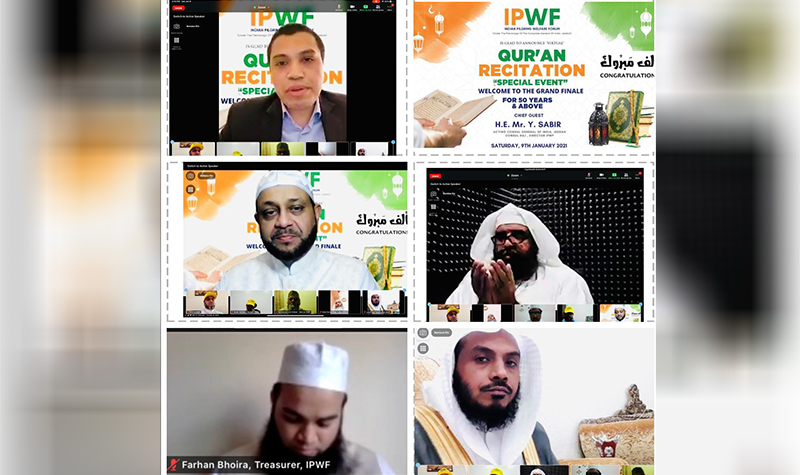 Chief Guest H E Y Sabir appreciated the social works of IPWF Group in the Kingdom for Indian community and praised the brilliant performance of the Quran Recitation contestants. He congratulated the winners and participants and said that “It gives us great pleasure seeing that all Indians participated from aall around the world, especially from within the kingdom, across the middle east and different parts of India.” He also said that the judges and Jury members handled the judgements so fascinatingly well and the recitation by the participants was amazing. He further added that the President of IPWF Group Md. Ayyub Hakeem and ExCom team deserves appreciation for their relentless efforts for this noble cause. He also added that IPWF Cycling Club   Is in integral part of IPWF Group organized on 1st of January 2021 a exciting and one of a kind cycling event for the indian Community at the International Indian School Jeddah (IISJ). The regular cycling group is formed to encourage Indian community to adopt a healthy lifestyle through cycling, considered to be complete workout both for mind and soul.

Md. Ayyub Hakeem, President of the forumwhile speaking welcomed the Chief Guest, Judges, Participants and all the dignitaries who attended from different parts of the globe. He congratulated all the finalists and participants. He said the participants will be sent certificates digitally, whereas the winner (5) will receive the physical certificate and award at their respective address/destinations.

The event was so mesmerizing in its own terms, with added recitation of Holy Quran being recited in such beautiful voices by such “young” Indians.

Although all participants were a true winner in themselves, even then it was decided to announce the best contestants. Mr. Mohammad Hashim Ansari from Bhopal India was awarded the First place while Mr. Abdul Wajid from Mysore India secured the Second position. Mr. Abdul Razak Puthukudi from Kozhikode came Third. Mr. Mohammed Ilyas Patel from Salalah Oman and Mr. Mhammed Zubair Thecheri from Jeddah were declared fourth and fifth winners, respectively.

Three prominent Huffaz played a significant role of judges. Hafiz Mousa Noor Bilal Ahmed Maniar, a well known personality, completed his education from Haram Makkah MadaarisTahfeez ul Quran, currently Imam and teaching Quran in Makkah. Hafiz Musab Hassan Ahmed Al Jamai studied in Madinah Al-Munnawarah, Imam and currently teaches Quran in Makkah. Last but not the least Hafiz Farhan Abdur Rab, Treasurer of IPWF Group and Instrumentation Engineer by profession, working in Jeddah. The Judges too were awestruck and had some beautiful comments for these “young” Quran enthusiasts. They revealed that it truly was a great event, as almost all of the participants recited in such a soleful Qirat and they rarely got a chance to hear such a voice.

Executive members Abdul Rahman Poyakkara and Mohammed Amin Hakeem provided the technical support as hosts brilliantly, while advisor of the forum Mr. Aziz Kidwai delivered Vote of Thanks joining the event online from Lucknow. He thanked the Chief Guest, judges, participants, dignitariesand distinguished guests for sparing their precious time. He also appreciated the team work of the executive committee for organizing this event, lady coordinators Mrs. Farah Ayoob and Mrs. Aafreen Farhan for their dedication and support. The program was thus concluded timely with a beautiful emotional Dua rendered by Hafiz Mousa Noor Bilal Ahmed Maniar. 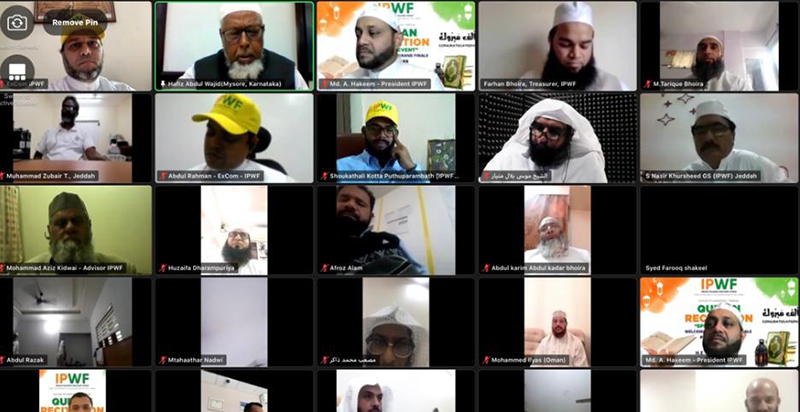