The World Health Organisation has warned that the COVID-19 pandemic is entering a "new and dangerous" phase. Thursday saw the most cases in a single day reported to the WHO.

Tedros Adhanom Ghebreyesus said the day had seen 150,000 new cases with half of those coming from the Americas and large numbers also from the Middle East and South Asia, the BBC reported.

He said the virus was still spreading fast and the pandemic accelerating.

He acknowledged people might be fed up with self-isolating and countries were eager to open their economies but he said that now was a time for extreme vigilance.

Maria van Kerkhove, technical lead of the WHO's COVID-19 response, told a press conference the pandemic is "accelerating in many parts of the world".

"While we have seen countries have some success in suppressing transmission and bringing transition down to a low level, every country must remain ready," she said.

Mike Ryan, the head of the WHO's Health Emergencies Programme, said that some countries had managed to flatten the peak of infections without bringing them down to a very low level.

"You can see a situation in some countries where they could get a second peak now, because the disease has not been brought under control," he said.

"The disease will then go away and reduce to a low level, and they could then get a second wave again in the autumn or later in the year."

Pune, Dec 1: Vaccine development company Serum Institute, India on Tuesday said the Covidshield vaccine will not be released for mass use unless it is proven immunogenic, and safe.

The company also said the serious adverse event (SAE) that happened to a city based volunteer though unfortunate was in no way induced by the vaccine.

Serum Institute which had earlier said it would claim over Rs 100 crore damage from the volunteer for damaging its reputation said it was sympathetic with the volunteer's medical condition and the incident is highly unfortunate.

"However, we would like to clarify that all the requisite regulatory and ethical processes and guidelines were followed diligently and strictly," the company said.

According to Serum Institute, the concerned authorities were informed and the Principal Investigator, Data Safety Monitoring Board (DSMB) and the Ethics Committee independently cleared and reckoned it as a non-related issue to the vaccine trial.

"Post which we submitted all the reports and data related to the incident to the DCGI (Drug Controller General of India). It is only after we cleared all the required processes that we continued with the trials," the company said.

"Taking into consideration the complexities and existing misnomers about vaccination and immunisation; the legal notice was sent therefore to safeguard the reputation of the company which is being unfairly maligned," the company added.

The 40-year-old city based volunteer, who works as a business consultant had wanted to investigate the cause of him contracting severe neurological health complications he had suffered after being vaccinated with Covidshield shots under development at Serum Institute, but the company was intimidating him with a threat of over Rs 100 crore damage suit, his advocates had said.

According to the advocates, their client was vaccinated on September 29 and developed severe neurological health complications and instead of probing the cause and stopping the trials Serum Institute and others kept silent.

"We are yet to get any reply for the legal notice sent to various parties, including Serum Institute. We have seen news reports about Serum Institute threatening our client with a suit for over Rs 100 crore," N.G.R. Prasad, Advocate, Row & Reddy, told IANS.

"Our client had restricted his claim only for Rs 5 crore and wanted investigation to start as to the cause of him suffering severe neurological problems and stop the vaccine from affecting other people," Prasad added.

A family friend of the volunteer told IANS: "He was a healthy young male. He had no pre-existing ailments. Not even blood pressure. But 10 days after the vaccination, he had developed severe neurological complications."

One child or youth under 20 infected with HIV every 100 seconds: UNICEF

Geneva, Nov 25: Approximately once every minute and 40 seconds, a child or young person under the age of 20 was infected with HIV last year, the UN Children's Fund (UNICEF) said on Wednesday.

Prevention efforts and treatment for children remain some of the lowest amongst key affected populations, and in 2019, a little less than half of children worldwide did not have access to life-saving treatment, UNICEF said in a new report.

"Children are still getting infected at alarming rates, and they are still dying from AIDS. This was even before Covid-19 interrupted vital HIV treatment and prevention services putting countless more lives at risk," said UNICEF Executive Director Henrietta Fore.

According to UNICEF, the Covid-19 pandemic has worsened inequalities in access to life-saving HIV services for children, adolescents and pregnant mothers everywhere, and there are serious concerns that one-third of high HIV burden countries could face coronavirus-related disruptions.

"Even as the world struggles in the midst of an ongoing global pandemic, hundreds of thousands of children continue to suffer the ravages of the HIV epidemic," said Fore.

Data from the Joint UN Programme on HIV/AIDS (UNAIDS), cited in the report, showed the impact of control measures, supply chain disruptions, lack of personal protective equipment, and the redeployment of healthcare workers on HIV services.

Pediatric HIV treatment and viral load testing in children in some countries fell by 50 to 70 per cent, and new treatment initiation by 25 to 50 percent in April and May, coinciding with partial and full lockdowns to control the novel coronavirus.

Health facility deliveries and maternal treatment were also reported to have reduced by 20 to 60 per cent, maternal HIV testing and antiretroviral therapy (ART) initiation by 25 to 50 per cent, and infant testing services by approximately 10 percent.

Though the easing of control measures and the strategic targeting of children and pregnant mothers have successfully led to a rebound of services in recent months, challenges remain, and the world is still far from achieving the global 2020 pediatric HIV targets, said UNICEF.

Despite some progress in the decades-long fight against HIV and AIDS, deep regional disparities persist among all populations, especially for children.

While the Middle East and North Africa region recorded 81 percent pediatric ART coverage, only 46 per cent and 32 per cent were covered in Latin America and the Caribbean, West and Central Africa, respectively.

The South Asia region recorded 76 per cent coverage, Eastern and Southern Africa 58 per cent, and East Asia and the Pacific 50 per cent. 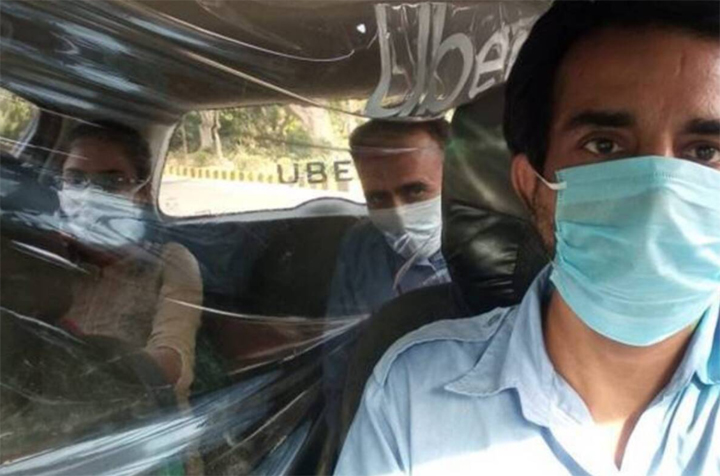 Boston, Dec 5: Using computer simulations, scientists have analysed the airflow patterns inside a car's passenger cabin, shedding light on the potential ways to reduce the risk of Covid-19 transmission while sharing rides with others.

The study, published in the journal Science Advances, assessed the airflow inside a compact car with various combinations of windows open or closed.

According to the researchers, including those from Brown University in the US, the simulations showed that opening windows created airflow patterns that dramatically reduced the concentration of airborne aerosol particles exchanged between a driver and a single passenger.

However, they said blasting the car's ventilation system didn't circulate air nearly as well as a few open windows.

"Driving around with the windows up and the air conditioning or heat on is definitely the worst scenario, according to our computer simulations," said Asimanshu Das, co-lead author of the research from Brown University.

"The best scenario we found was having all four windows open, but even having one or two open was far better than having them all closed," Das said.

While there's no way to eliminate risk completely, and current guidelines recommend postponing travel, the scientists said the goal of the study was simply to assess how changes in airflow inside a car may worsen or reduce risk of Covid-19 transmission.

In the research, the computer models simulated a car, loosely based on a Toyota Prius, with two people inside -- a driver, and a passenger sitting in the back seat on the opposite side from the driver.

The scientists said they chose this seating arrangement since it maximised the physical distance between the two people.

Since the novel coronavirus is thought to spread via tiny aerosol particles that can linger in the air for extended periods of time, the researchers simulated airflow around and inside a car moving at 50 miles per hour.

Part of the reason opening windows is better in terms of aerosol transmission is because it increases the number of air changes per hour (ACH) inside the car that reduces the overall concentration of aerosols, the study noted.

The scientists showed that different combinations of open windows created different air currents inside the car that could either increase or decrease exposure to remaining aerosols.

Since the occupants in the simulations were sitting on opposite sides of the cabin, they said very few particles ended up being transferred between the two.

According to the research, the driver was at slightly higher risk than the passenger since the average airflow in the car goes from back to front, but added that both occupants experience a dramatically lower transfer of particles.

When some -- but not all -- windows were down, the study yielded counterintuitive results.

Citing an example of one such instance, the scientists said opening the windows next to each occupant carried a higher exposure risk, compared to putting down the window opposite each occupant.

"When the windows opposite the occupants are open, you get a flow that enters the car behind the driver, sweeps across the cabin behind the passenger and then goes out the passenger-side front window," said Kenny Breuer, a professor of engineering at Brown University and a senior author of the research.

"That pattern helps to reduce cross-contamination between the driver and passenger," Breuer said.

The scientists said airflow adjustments are no substitute for mask-wearing by both occupants when inside a car, adding that the findings are limited to potential exposure to lingering aerosols that may contain pathogens.

Citing another limitation of the study, the scientists said it did not model larger respiratory droplets or the risk of actually becoming infected by the virus.

However, they said the findings provide valuable new insights into air circulation patterns inside a car's passenger compartment.