The ‘Sauhaarda Iftar Koota’ recently hosted by Sri Vishwesha Teertha Swamiji, the chief pontiff of Paryaya Pejawar Mutt in Udupi’s historic Krishna Temple/Mutt has triggered a widespread controversy as several hate-mongers have accused him of hurting the sentiments of Hindus. 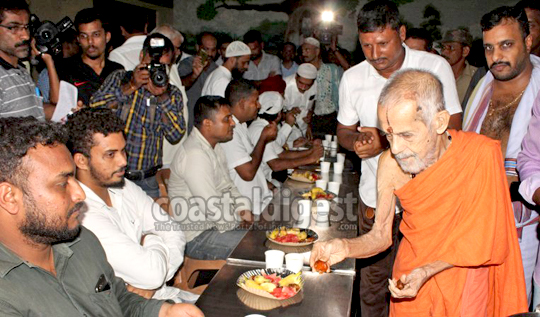 The seer has taken to social media to counter the continuous onslaught of the communal forces and uploaded a video wherein he made his stance clear. Here are the 10 interesting points from the video clip that not only promote communal harmony but also serve as a tight slap to the communalism.

3. Peace is good for all the communities, as well as for the country
The seer laid emphasis on the significance of maintaining peace in the society. Referring to recent communal clashes, the seer said that peace needs to be restored for the good of the country. Taking the first step will only bring good name to the Hindus; it cannot harm the Hindus in any way, he said.

4. “Madhvacharya promoted the Hindu-Muslim bond. I am walking in his footsteps”
The seer recalled the history of Madhvacharya who wanted good relationship with Muslim rulers of his time. He also narrated a story: “Once, Madhvacharya was surrounded by the soldiers of a Muslim ruler (outside the palace). He politely asked the soldiers not to harm him as they outnumbered him and his disciples. He told them that he just wanted to meet their king. The soldiers did not harm him. The king too was impressed by Madhvacharya and honored him.”

5. Muslim Sultans helped Hindu swamijis!
“A Muslim Sultan (king) donated land to the Mantralaya Swamiji out of sheer respect. On the other hand, Satyabhoda Swamiji is known to have given suggestions to the Sultan during his time. I am only trying to continue the friendly bond between two communities they began ages ago” he said.

6. “Muslims honored me too”
“If people can call me to their programs in Bhatkal, Gangavati, Kasargod and other places and treat me well, why can’t I invite them and show some hospitality? I see this as a basic human etiquette. Religion is not at all in question here” he said.

7. Namaz is a way to pray to the Lord. It’s not anti-Hindu
“After iftar, the Namaz was performed atop of dining hall which is open to the public, not in the sanctum sanctorum. Namaz doesn’t contain anything that insults Hindus or their religion in any way… How is it wrong to let others follow their traditions?” he asked.

8. Muslims helped the Mutt always
“A lot of Muslims have offered Hore Kaanike (offertory) to the Mutt during the Paryaya mahotsava. Udupi’s Haji Abdullah had also donated to the Mutt during the Paryaya of Parama-Guru Vishwajna Teertha in 1904. Muslims supported us and reassured our safety when a section of people (belonging to Hindu community) threatened to attack the Mutt recently. Such Muslims are always welcome here” he said.

10. “I follow my religion and tolerate others’ faiths”
The seer said that he always believed showing strict adherence to his religion while being tolerant towards other faiths. “I have always worked for the interest of Hindu religion. But I also want to continue having good relations with others as well” he said.

(The author, Sumedha V, is a student of mass communication and journalism. A native of Mysuru, she's currently residing in Mangaluru.)

A nice write up. Swamiji's bold statements are indeed praiseworthy.

Like all Hindus I am also a big fan of Pejawar Swamiji. But that doesn't mean whatever he does and says are 100% correct. Normally human beings lose their common sense when they become old. Still we respect our swamiji.

Swamiji has boldly accepted the fact that many Hindus consume beef. It would have been great if he revealed the fact that Vedas too advocate beef consumption and that beef was considered a holy food for Brahmins during vedik period.

In my opinion Sri Pejawar Swamiji is very close to Islam. Pious and practicing Muslims should get more closer to him and convince him what is Islam. Thanks sister Sumedha for this wonderful presentation. Thank you to CD too. You r doing a wonderful job.

We Hindus are always like this. We welcomed Muslims from other countries thinking they are also human beings like us. Unfortunately they cut country into many pieces and named it as Pakistan, Bangladesh etc. Now our swamiji is welcoming them to temples. I am worried whether in future they may think of converting krishna mutt into haji Abdulla mosque. We should always be careful about those people.

Swamiji has created a platform for interfaith debate. Now it's the responsibility of Muslims to take it forward as they have got a wonderful and historic opportunity.

Today's Muslims are followers of Aurangzeb and Tippu Sultan who massacred innocent Hindus. They are not followers of haji Abdulla.

Swamiji has not spoken the full truth. He has said Hindus also eat beef like Muslims. In fact Hindus are the major beef consumers and exporters in India. Most of the leading beef exporting companies in India are owned by Jains, Brahmins and other Hindus. some of the BJP leaders also doing this business. To fool others they keep Muslim names to their company. India's leading beef exporting company 'al-Kabeer' belong to Jains.

Even though I have immense respect for swamiji , but in principal we are against it . Swamijis should not hurt religious feelings and refrain out of politics . There is no need for debate with muslims . we have seen what we got in return when we showed immense love when they first entered india . do muslims allow us to celebrate dipavali in mosque and also ganeshotsav ? its wrong we hindus must give up this fake secularism . time has come to move towards hardcore hindutva . There is absolutely no need for this type of drama . They will back stab u from behind swamiji and history proved .

nothing wrong in swamiji's act, he should be the role model for every swamiji who always fight for non related issues.

he s the true swamiji atleast one swamiji s thr to work for hindu muslim unity. a big salute .

wonderful swamiji this s what we expect from all swamiji.

This issue does not deserve this much of media publicity. There are many issues in the society. Forget this and move on instead of dragging and defaming the mutt.

Where is pink chaddi man ? Kick him out of karnataka. BJP ruled Goa also banned him. Then why Congress govt in karnataka allowing him to spread hatred?

One of the speciality of manuvaadi swamis is that they can tolerate Muslims and Christians but not Dalits. The one who vowed to build ram mandir and protect the interests of Hindus in India is now endorsing Muslim cause and trying to suppress Hindu voices. This is very unfortunate development. This has proved that upper caste Hindus are not true Hindus. They can change their loyalty anytime.

Do you need burnol ? I have special saffron burnol and itch guard for u if you r not in a condition to bear this

Truly 10 powerful slaps in the face of hatemongers. The paid media is trying to bury swamijis statements by focusing more on statements of others. This online media has done a good job by highlighting it. Keep it up.

Hahahaha. When pejavar swami giving deekshe to Muslims? Now only ashta mathas are there. You can take yet another 'bold' step to create 2 more mathas - beary matha and sayiber matha

Swamiji is telling the truth, Accept it and dont forget, U will not stay YOUNG alwz... If Your arrogance continues... U might see your own Common sense lose in old age.

Reality YOu deny is Hindus eating Beef, if a hindu doesnt eat beef, he is not a good hindu according to the vedas... (Atleast READ your scriptures before U say U are a hindu)

THINK and WAKE UP

I wanted to give a proper reply to all including swamiji. But, i am not ready to get arrested for this silly issue. So ignoring. 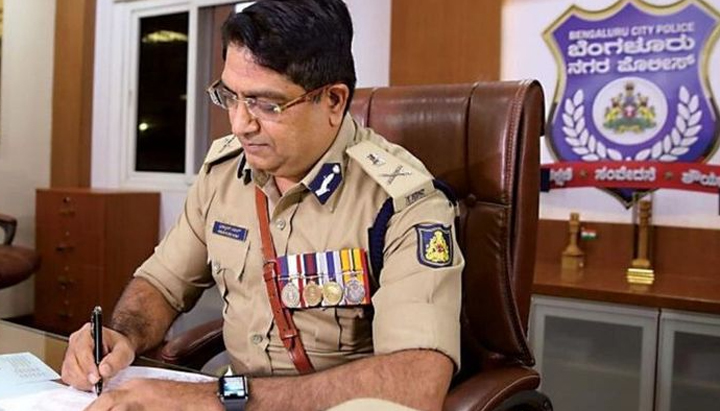 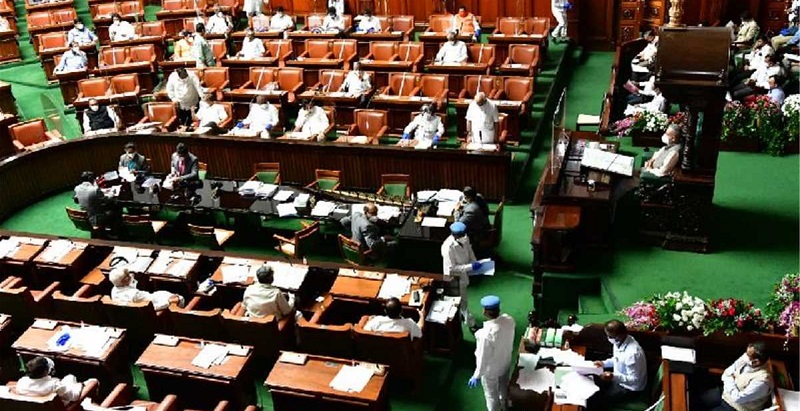 Bengaluru, Sept 21: An eight-day Monsoon Session of the Karnataka legislature began on Monday amid unprecedented health safety measures like compulsory wearing of masks, gloves, face shields and permission for entry to only those carrying COVID-19 negative certificates.

The first-of-its-kind session has several firsts to its credit — legislators sitting in glass enclosures, and staff and marshals wearing gloves, face shields and masks. Each legislator wore a face mask before they were allowed entry into the House. Sanitiser bottles were placed at their seats.

Special seating arrangements were made for members of the Legislative Assembly and Council in accordance with the social distancing guidelines.

“Till date, around 70 MLAs, MLCs and more than dozen Ministers have tested coronavirus positive, due to which the Secretariat took these measures,” an official said.

The Assembly and Legislative Council will be adjourned for an hour for lunch after obituary references to former President Pranab Mukherjee, leaders and prominent personalities who passed away during the interregnum.

The Opposition Congress is trying to push hard for a debate on the state’s economy, alleged corruption during COVID-19 management, drugs scandal, to corner the government. The Janata Dal-Secular plans to counter the ruling BJP on three contentious ordinances that are in line with the Union government’s farm Bills. 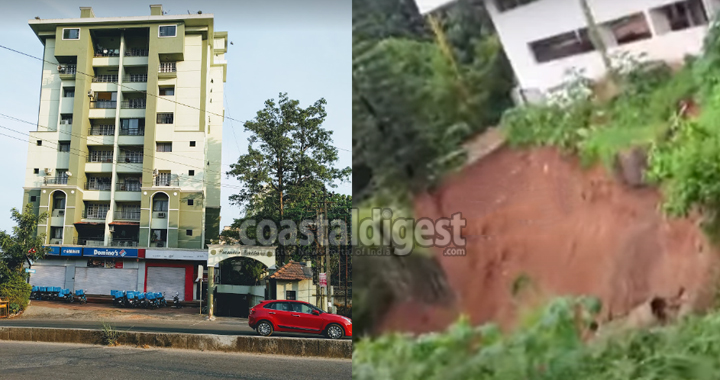 Udupi, Sep 21: Residents of a prominent apartment complex in Manipal today woke up to witness a landslip adjacent to their building.

‘Premier Enclave’, which was inaugurated around five years ago is now facing threat due to landslip amid torrential rains.

Deputy Commissioner G Jagadeesh has instructed the residents to vacate the building as soon as possible. Developed by Premier Builders, the 8+2 storey residential apartment has around 35 flats.

According to Mohanraj the apartment was constructed on pile foundation and if a crack appears on the wall before 24 hours, it is could pose a serious risk.

As part of precautionary measures, the 2 km road stretch from Indrali junction to Manipal, has been turned into one-way. 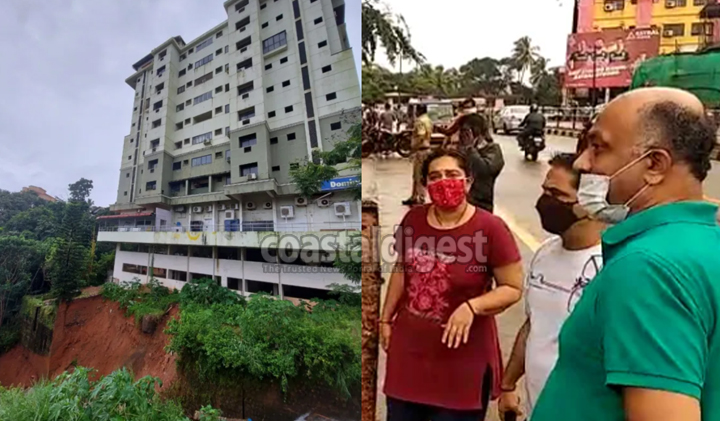 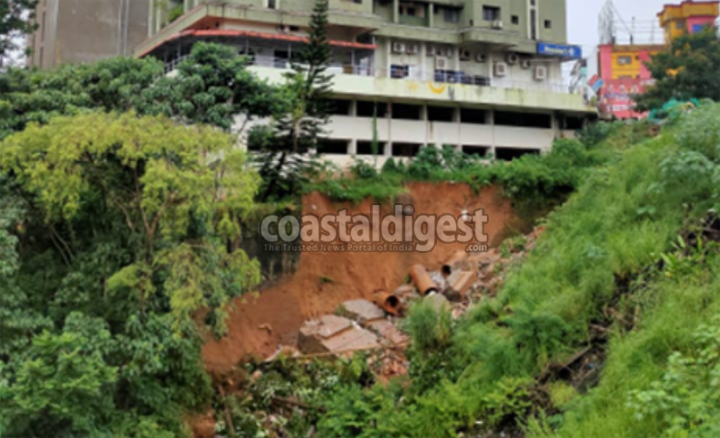 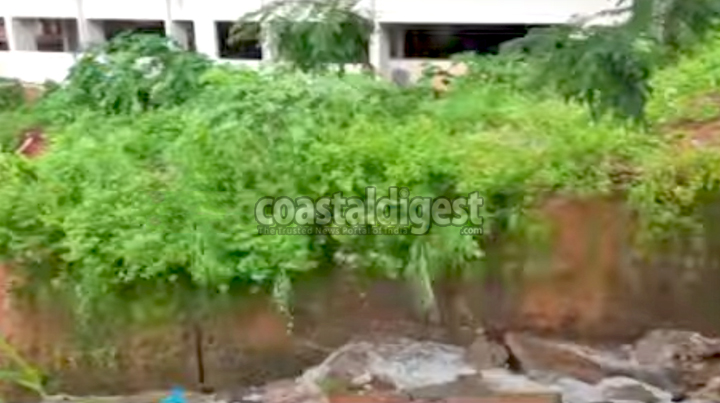