Proud to be person of Indian origin: Portugal PM

Bengaluru, Jan 9: Portugal Prime Minister Antonio Costa on Sunday recalled his Indian roots at the Pravasi Bharatiya Divas in Bengaluru and said that he was proud to be a person of Indian origin. 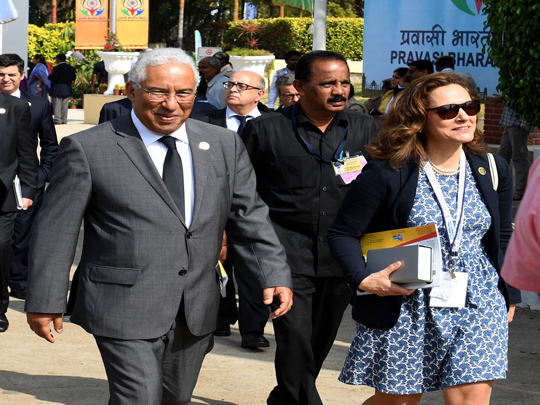 Costa, who traces his roots to Goa, was the chief guest at PBD-2017. "Yes, I am actually a person of Indian origin," Costa said and even took out a card from his coat pocket and waved it at the audience. The delegates applauded Costa's gesture.

The 54-year leader recalled that his father - Orlando da Costa - had spent most of his youth in Goa, which was then under the Portuguese rule. “My father spent his childhood in Goa. We have never lost ties with India. I still have many relatives in Margao and will be visiting them shortly,” he said.

Costa said it is the duty of diaspora to connect the country of their origin with that in which they presently live.

India's Covid-19 cases surged further on Friday as the nation reported 2,64,202 new Covid-19 infections, 6.7 per cent higher than yesterday, according to the Union Health Ministry data.

With today's spike, the nation's total tally of Covid-19 cases jumped to 3,65,82,129 which includes 5,753 cases of the Omicron variant, according to the Union Health Ministry data updated on Friday. There has been a 4.83 per cent increase in Omicron cases since Thursday.

The  active cases comprises 3.48 per cent of the total infections, while the national Covid-19 recovery rate has decreased to 95.20 per cent, the ministry said.

A total 2,76,110 coronavirus infections were reported in a single day on May 19.

The number of people who have recuperated from the disease surged to 3,48,24,706, while the case fatality rate  was recorded at 1.33 per cent.

The cumulative doses administered in the country so far under the nationwide Covid-19 vaccination drive has exceeded 155.39 crore.

While Omicron represents a new virus evolutionarily different from the Delta or previous variants, experts believe that the third wave is largely following the migratory pattern of the previous two waves.

Speaking on Thursday at a panel discussion titled Variants, Vaccines and Us, virologist Dr V Ravi, a member of Karnataka's Technical Advisory Committee (TAC), noted that the outbreak will potentially peak in the city by the end of the month, before moving to other districts. 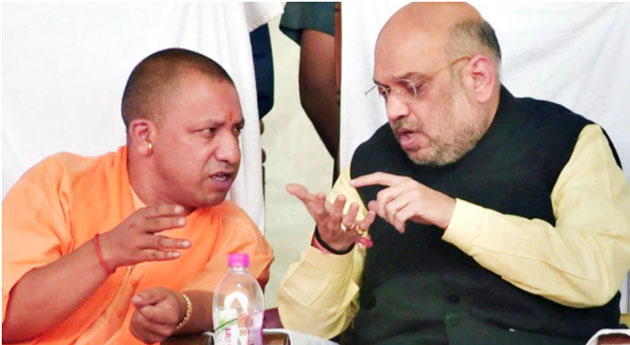 Lucknow, Jan 13: Uttar Pradesh minister Dharam Singh Saini on Thursday resigned from the BJP, becoming the ninth MLA to break off ties with the saffron party just days ahead of the state assembly polls.

Earlier in the day, Dharam Singh Saini returned the security cover and residence allotted to him by the state government, which set off speculation that he was going to quit the BJP.

The BJP’s Uttar Pradesh unit has witnessed a string of defections over the last few days, starting with cabinet minister Swami Prasad Maurya. At the time, Maurya had said that many more legislators would follow suit.

He said he was resigning due to "gross neglect" towards Dalits, backwards, farmers, unemployed youth and small traders. Over the following days, several other BJP MLAs Brajesh Prajapati, Roshan Lal Varma, Bhagwati Sagar, Mukesh Verma, Vinay Shakya among others, quit the party.

OBC leader Dara Singh Chauhan resigned on Wednesday from the Yogi Adityanath cabinet and appeared to be headed towards the Samajwadi Party. Chauhan said he had worked with dedication for the past five year but Dalits, the OBCs and the unemployed did not get justice from the BJP government.

Dharam Singh Saini is said to be a close aide of Maurya.

Earlier, Suheldev Bharatiya Samaj Party (SBSP) chief Om Prakash Rajbhar claimed that one to two ministers would quit the Yogi Adityanath Cabinet daily and this figure would go up to 18 by January 20. Rajbhar has struck an alliance with the Samajwadi Party for the 2022 assembly elections.

The Uttar Pradesh Assembly elections will be held in seven phases. Polling will be held from February 10 and the counting of votes will take place on March 10.

Earlier, Shikohabad MLA and backward caste leader Dr Mukesh Verma has resigned from the party. "Swami Prasad Maurya is our leader. We will support whatever decision he takes. Many other leaders will join us in the coming days," Verma said.

In his letter addressed to the state BJP president, Varma alleged that the Yogi Adityanath government, in the past five years, has failed to address the problems of weaker sections, youth, farmers, Dalits and OBCs.

He said small traders and businessmen had suffered in the regime.

OBC leader Dara Singh Chauhan resigned Wednesday from the Yogi Adityanath cabinet and appeared to be headed towards the Samajwadi Party.

A day earlier, as BJP leaders brainstormed in Delhi on the UP assembly polls, Swami Prasad Maurya, also a prominent Other Backward Class leader, had quit the state cabinet.

Three other BJP MLAs announced their resignation from the party, seemingly in Maurya's support.

Yet another BJP MLA, Avtar Singh Bhadana, quit the party on Wednesday and is joining the Rashtriya Lok Dal, an SP ally.

But two Uttar Pradesh MLAs – Naresh Saini from the Congress and Hari Om Yadav from the SP – joined the BJP on Wednesday, a welcome development for the ruling party as it deals with the sudden defections from its ranks.