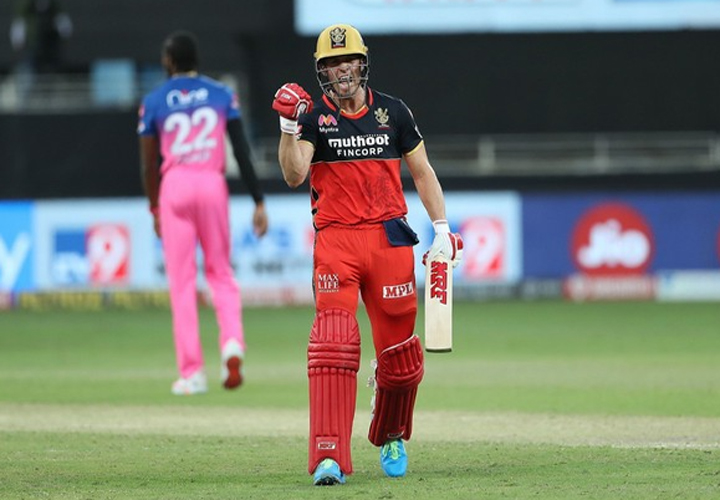 His remark came as RCB chased down 178 with seven wickets in hand and two balls to spare. De Villiers played an unbeaten knock of 55 runs off just 22 balls with the help of one four and 6 sixes.

"He is superhuman, there are very few in the cricket world who could do that, we are very lucky to have him in RCB, we have seen a couple of performances like this from him this year, probably three to be fair and in the match against Rajasthan, he was as good as it gets," Hesson said in a video posted on the official Twitter handle of RCB.

"Priority for us is to get better, we won against Rajasthan Royals on the back of outstanding individual performance, we relied on the fact that ABD is as good as he was. Chris Morris was exceptional but all in all, it was not our best performance, it's a good sign for RCB that we haven't played our best cricket yet we managed to win.

De Villiers had come to the crease in the 13th over with RCB still requiring 76 runs from 42 balls.

"There was no doubt that the momentum was with the opposition, basically it was there's to win. We never lost belief, Virat, Finchy and Dev laid a good foundation for us, it was difficult to get the ball away, it got pretty soft later on. We just maintained the belief, we got literally a couple of balls to get out of the ground and we started believing from there," de Villiers said in a video posted on the official Twitter handle of RCB.

In the match against RCB, Rajasthan Royals batted first and posted a total of 177/6 in the allotted twenty overs. Steve Smith top-scored for Royals as he played a knock of 57 runs off just 36 balls.

Chris Morris was the pick of RCB bowlers as he returned with figures of 4-26 from his four overs.

RCB is now at the third position in the IPL 2020 standings with 12 points from nine matches.

The side will next take on Kolkata Knight Riders on October 21 at the Sheikh Zayed Stadium in Abu Dhabi.

We will free Hyderabad from 'Nizam culture': Amit Shah 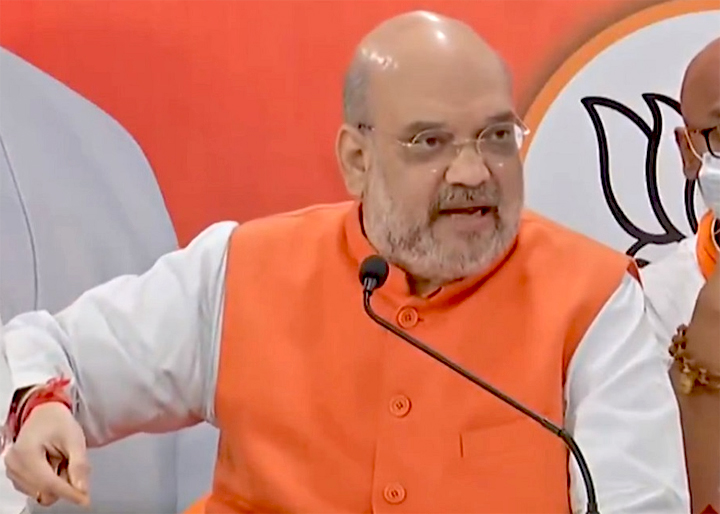 Union Home Minister Amit Shah on Sunday launched scathing attack on the Opposition saying that he will free Hyderabad from the 'Nizam culture' and added that BJP would claim victory in the upcoming polls without doing any 'appeasement politics'.

"We will free Hyderabad from the Nizam culture and work towards constructing a modern and new city with democratic principles. We will take it away from dynastic politics without doing any appeasement," ANI quoted him saying in Hyderabad.

Taking digs at Asaduddin Owaisi, Shah further said, "When I take action then they create ruckus in Parliament. Tell them to give in writing that Bangladeshis and Rohingyas have to be evicted. Who takes their side in Parliament?" Owaisi had targeted Shah earlier asking What is the Home Minister doing if there are illegal Rohingyas in Hyderabad.

Further slamming the Opposition Shah said, "Hyderabad has the potential to become an IT hub. Infrastructure development has to be done by the municipal corporation even though funds are given by State and Centre. The current corporation under TRS & Congress is the biggest impediment to this". 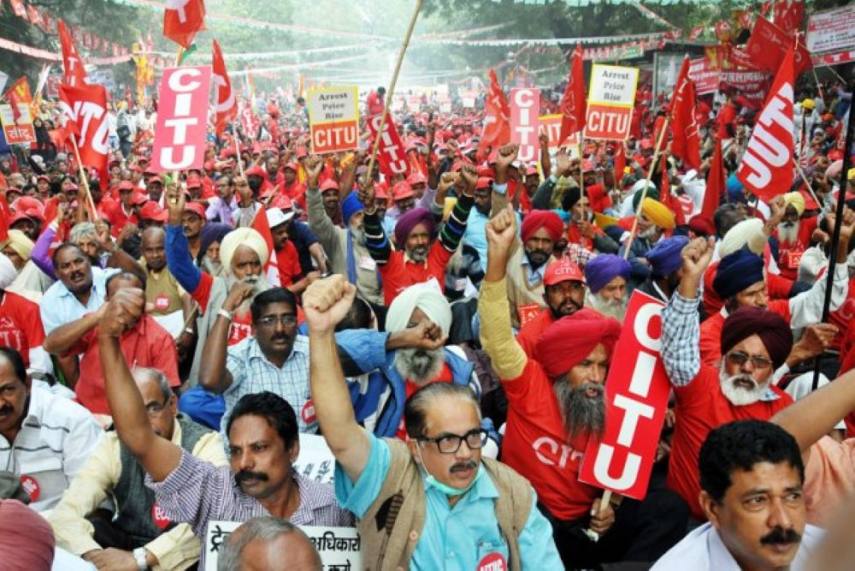 New Delhi, Nov 26: Public services are likely to be affected as central trade unions began a nationwide strike on Thursday, with a union representative saying that Tamil Nadu and Kerala have been affected the most so far due to the agitation.

Various independent federations and associations are also part of the joint platform.

They are protesting against the new farm and labour laws, among other workers-related issues, as well as to raise various demands.

"The strike has begun. Kerala and Tamil Nadu are completely shut down. Similar situation is also developing in Odisha, Punjab, Haryana, Telangana and Goa. There is also a good response to the strike in Maharashtra," AITUC General Secretary Amarjeet Kaur told PTI.

BJP-aligned Bharatiya Mazdoor Sangh (BMS) is not participating in the strike.

"Visakhapatnam steel plant is affected due to the strike. Besides, majority of workers in coal mines are also on strike. The work at copper plants, port and dock area are also affected. Delhi industrial areas are closed down. Workers would protest at Jantar Mantar," Kaur said.

The united front of farmer organisations -- AIKSCC -- has also extended its support to the general strike and are mobilising their members in rural areas to express solidarity with the striking workers.

In many states, auto and taxi drivers have decided to keep off the roads. The federations of railway and defence employees have decided to have large mobilisation on Thursday to express solidarity with the striking workers.

The demands of the joint platform include cash transfer of Rs 7,500 per month tor all non-income tax paying families and 10 kilograms of free ration to every needy person per month.

They have also asked the government to withdraw all "anti-farmer laws and anti-worker labour codes and stop privatisation of public sector, including the financial sector and stop corporatisation of government-run manufacturing and service entities like railways, ordinance factories, ports etc".

Among other demands, the unions have sought withdrawal of the "draconian circular on forced premature retirement of government and PSU employees".

Other demands of the unions include 'pension to all', scrapping NPS (National Pension System) and restoration of earlier pension with improvement in EPS-95 (Employees' Pension Scheme-1995 run by retirement fund body EPFO). 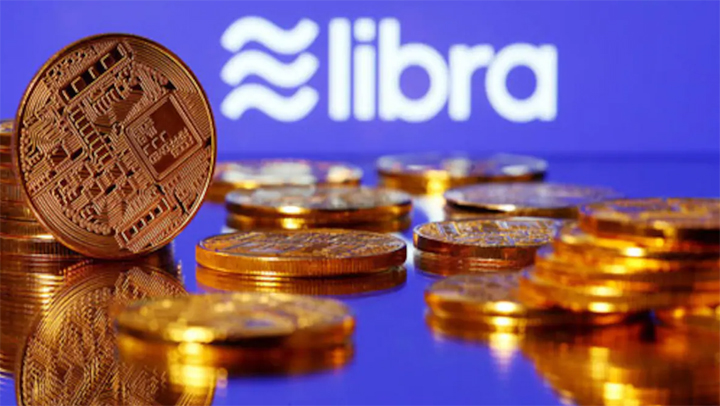 Facebook's Libra cryptocurrency is readying to launch as early as January, the Financial Times reported on Friday, citing three unidentified people involved in the project. The Geneva-based Libra Association that will issue and govern Libra plans to launch a single digital coin backed by the dollar, the FT said, citing one of the people.

The move would represent an even bigger scaling-back of the project's ambitions than that proposed in April in response to a regulatory and political backlash against the project. Libra, unveiled by Facebook Inc last year, was relaunched in slimmed-down form after regulators and central banks across the world raised concerns it could upset financial stability and erode mainstream power over money.

The Libra Association, of which Facebook is one of 27 members, is seeking the go-ahead from Switzerland's markets watchdog to issue a series of stablecoins backed by individual traditional currencies, as well as a token based on the currency-pegged stablecoins. Yet under the body's new plan, other coins backed by traditional currencies, as well as the composite, would be introduced at a later date, the FT said.

The Libra Association did not immediately reply to a request for comment. FINMA, the Swiss regulator, did not elaborate beyond a statement in April confirming receipt of Libra's application for a payments licence. Stablecoins are designed to avoid the volatility typical of cryptocurrencies such as bitcoin, making them in theory more suitable for payments and money transfers.