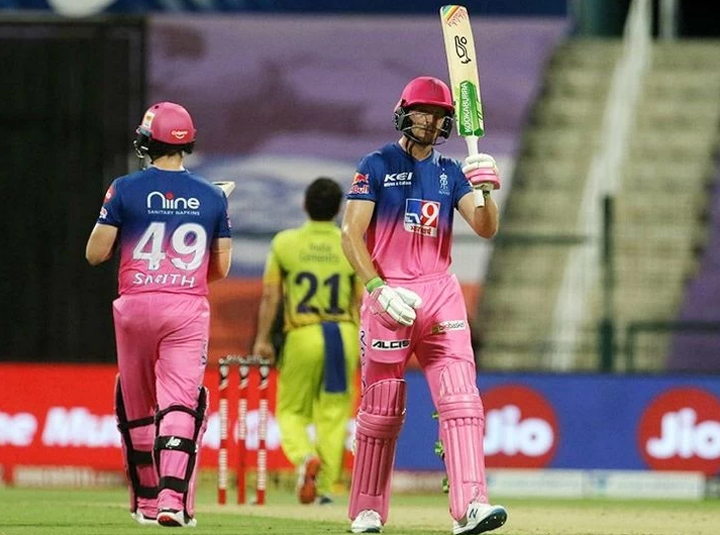 The win kept RR's play-off hopes alive while leaving their beleaguered opponents on the verge of elimination.

RR restricted the three-time champions CSK to a modest 125 for five after being invited to bowl and then overcame the target in 17.3 overs, thanks to a 98-run fourth wicket partnership between Buttler and skipper Steve Smith (26).

It turned out to be an excellent day for Buttler, who sent back Faf du Plessis with an incredible catch earlier in the day.

Early wickets were the need of the hour for CSK while defending such a low total and the Mahendra Singh Dhoni-led side did exactly that by reducing RR to 28 for three inside five overs.

Ben Stokes (19) started on a bright note before inside-edging a Deepak Chahar delivery on to his stumps and an over later, Robin Uthappa was sent back by Josh Hazzlewood as the right-hander went for an extravagant scoop over wicketkeeper Dhoni, who was playing his 200th IPL game.

After shining early in the tournament, Sanju Samson continued to disappoint with the bat, departing for a duck.

Buttler and Smith joined hands and played cautiously initially. While Buttler was the aggressor, Smith played the second fiddle in the partnership.

Opting to bat, CSK never got going and lacked the fire power to put up a decent score after being reduced to 56 for four in 10 overs.

Ravindra Jadeja top-scored for CSK with a 30-ball unbeaten 35 and skipper Dhoni made a run-a-ball 28 while adding 51 runs for the fifth wicket.

Jofra Archer (1/20) was terrific with the new ball but he would be disappointed with his outing on the field.

Besides Archer, the spin duo of Shreyas Gopal (1/14) and Rahul Tewatia (1/18) were economical in the middle overs, while young Kartik Tyagi (1/35) too was impressive.

Dhoni's decision to bat first backfired as RR picked up wickets at regular intervals to make life difficult for CSK.

CSK lost the in-form Faf du Plessis (10) in the third over, caught by Jos Buttler off Archer and then an over later, Shane Watson was sent back by Kartik.

Opening the batting again, Sam Curran made 22 off 25 balls before being dismissed by Gopal.

After that, a lot depended on Ambati Rayudu but he too disappointed, perishing in the next over off Tewatia's bowling as CSK slumped to 56 for four.

Dhoni and Jadeja tried their best to resurrect the innings and then up the ante, but it proved to be too little too late.

Dhoni was run out in search of a double in the 18th over.

Kedar Jadhav continued to struggle with the bat as RR bowlers didn't give the CSK batsmen any leeway. 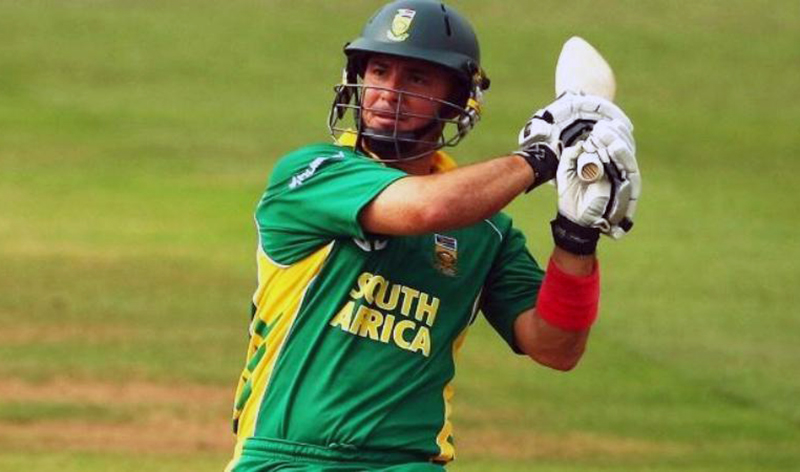 Colombo, Nov 21: South Africa's performance in ICC events, barring the 2019 50-over World Cup, has been nothing short of 'so close, yet so far' episodes. Playing top-class cricket through the tournament, the Proteas have somehow managed to choke every single time in the business end.

Now with the 2021 T20 World Cup set to be played in India in a year's time, former opener Herschelle Gibbs feels the players need to work on their mental strength if they wish to finally break the jinx. Speaking to ANI from Sri Lanka as he is busy preparing for his role as a coach in the Lanka Premier League (LPL), Gibbs threw light on factors responsible for South Africa's failure to win a World Cup, his latest love for coaching T20 franchises and his ferocious knock against Australia in 2006 which took the world by storm as smashing boundaries and sending bowlers on the leather hunt wasn't so mainstream back then.

The recently concluded 13th edition of the Indian Premier League (IPL) once again saw some quality performances from South African players such as Quinton de Kock, Kagiso Rabada and Anrich Nortje. But Gibbs believes the problem has never been with producing talented players. "South Africa always produces world-class players. But it's the big match temperament and dealing with the pressure that's been lacking over the years... until that changes I can't see anything changing," the Colombo Kings head coach said.

Appointed head coach in the LPL, Gibbs had initially landed in the country for a commentary stint. Throwing light on the change of role, the former opener said: "Well, an interesting turn of fate, I would say. I learned that Dav Whatmore, who was earlier named the coach of Colombo Kings had to pull out due to some personal reasons. "Even his replacement, Kabir Ali, tested positive for Covid-19, so when I was approached, I readily agreed to it. It's my ambition to coach in all the T20 leagues."

During his playing days, Gibbs was famous for his power hitting. The swashbuckling batsman's ferocious knock of 175 off 111 balls in 2006 when the team chased down Australia's total of 434 runs will always be the guiding light for any player on how to master the art of chasing. Reminiscing that 'kind of a T20' knock Gibbs said Australia had left the South Africans with no options but to fire on all cylinders in order to set another world record in the same match.

"Oh yes! You can't forget that kind of a knock, and that too coming against Australia and batting second. It was a good wicket to bat and the Australians left us with no options but to go all guns blazing, and that is what we did. "Graeme Smith too was brilliant that day in the chase. And yes, that was really kind of T20 innings, we reached 150 in the 19th over," he signed off. 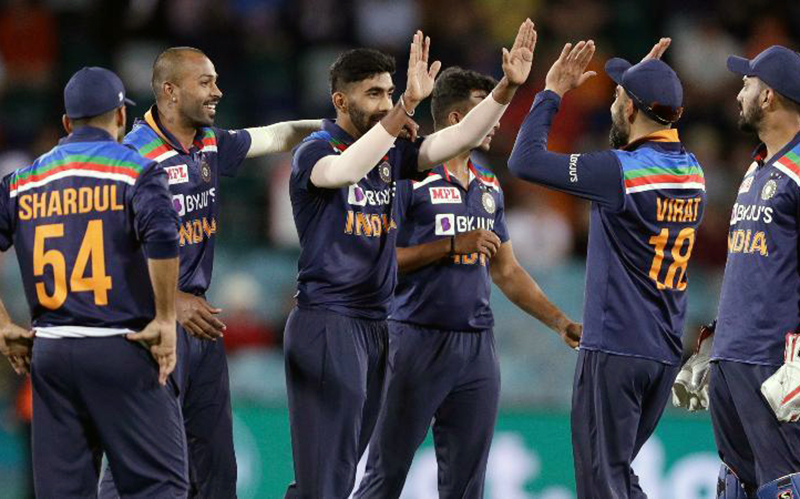 Canberra, Dec 2: India, riding on a 150-run partnership between Hardik Pandya and Ravindra Jadeja for the sixth wicket and a three-wicket haul from Shardul Thakur, pulled off a 13-run consolation win in a closely fought the third and final One-day International and avoided conceding a clean sweep to Australia here at the Manuka Oval.

Glenn Maxwell's 59 off 38 at the back-end of Australia innings threatened to take the game away from India, who had the Aussies on the mat at 158 five wickets after scoring 302 for five wickets in their 50 overs.

However, with Australia needing 35 off 33 deliveries, Maxwell tried to back away to a Jasprit Bumrah yorker and was bowled. The Aussie tail, which can bat, however found it tough and fell short.

Winning the toss for the first time in the series, India, who had already lost the series, Kohli opted to bat as the visitors made four changes in their line-up -- Shubman Gill, Shardul Thakur, Kuldeep Yadav, and debutant T Natarajan replacing Mayank Agarwal, Navdeep Saini, Yuzvendra Chahal, and Mohammed Shami.

India got off to a decent start as Shikhar Dhawan and Gill added 26 runs before the former became the first scalp of pacer Sean Abbott. Kohli, who came into bat at number three, then stitched a 56-run partnership with Gill and brought the Indian innings back on track.

However, just when India looked all set for a big total, the two Australia spinners -- Adam Zampa (1/45) and Ashton Agar (2/44) -- came into action and shared three wickets (Gill 33, Shreyas Iyer 19 and KL Rahul 5) among themselves to bring Australia on top with India reeling at 123/4 in the 26th over.

Pandya then joined forces with Kohli who scored his 60th ODI fifty and in the process also became the fastest batsman to score 12,000 ODI runs. However, Josh Hazlewood, who has been Kohli's nemesis in the last three ODIs against Australia, once again got the big wicket of the India skipper who went back to the pavilion after scoring 63 runs off 78 balls.

Jadeja and Pandya then steadily helped India recover and took their time to get used to the pace of the wicket. Once they got settled, the duo went all guns blazing in the death overs and collected boundaries at will to power India to 302 in their allotted 50 overs.

Later, the Indian bowlers kept getting wickets at regular intervals with Australia opening the batting with Marnus Labuschagne in place of David Warner, who could not play this game due to injury.

Unlike the last two games, the Aussies could not have a good opening partnership with Labuschagne getting dismissed for seven.

Steve Smith, who made centuries in the first two matches of the series, failed to make an impact scoring just seven.

Maxwell came into bat with Australia at 158 for five in just over 30 overs, needing another 145 to overhaul India's total.

The right-handed batsman, who was dismissed just when the Aussies were closing in on a win, hit two sixes off Jadeja's one over and then launched into debutant T Natarajan and took 18 runs off his eighth over along with Ashton Agar to tilt the balance Australia's way in a humdinger. But after his dismissal, it all fell apart for the hosts. 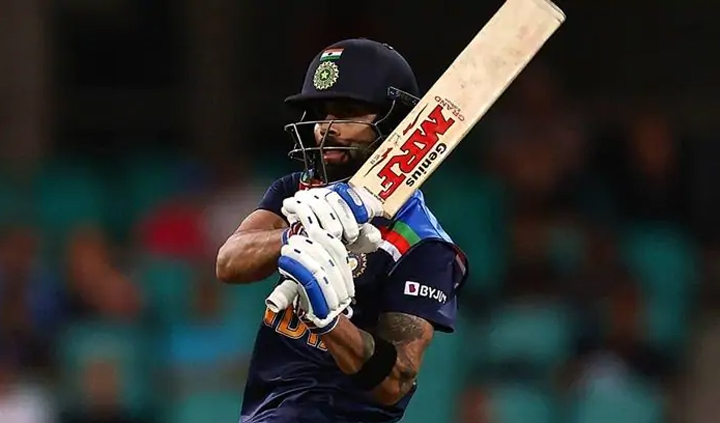 Kohli reached the milestone during the third and final match against Australia here.

Kohli, who needed 23 runs for the landmark coming into the match, touched the figure in his 242nd innings when he took a single off Sean Abbott in the 13th over of the India innings.

In comparison, it took Tendulkar 300 games to get there.

The 32-year-old Indian captain was playing in his 251st ODI and averages close to 60 in the format with 43 hundreds and 59 half centuries. He made his debut in 2008.