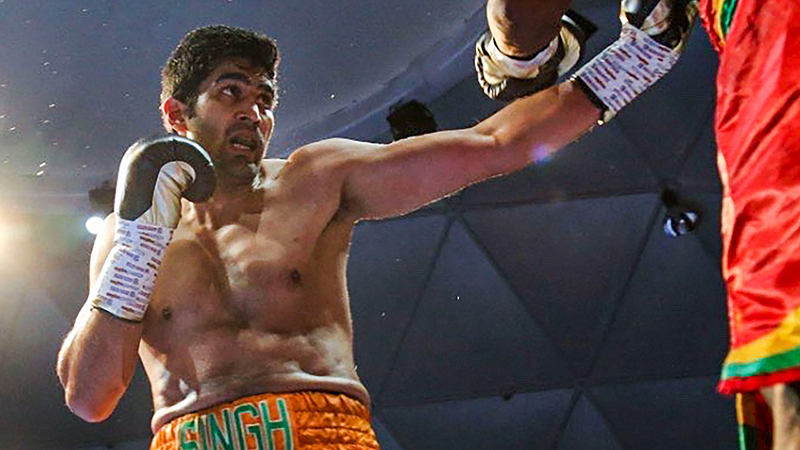 New Delhi, Feb 22: India's undefeated star professional boxer and Olympic medalist Vijender Singh is all set to enter the ring after more than a year-long gap due to Covid-19, as IOS Boxing Promotions announces the ace pugilist's upcoming fight in India.

While the promoters finalise on the opponent, date and venue, Vijender will certainly be in action this March with an aim to extend his unbeaten streak 12-0 (8 Knockout wins) in professional boxing. A group of young and talented boxers will also go head-to-head as undercards for the fight.

This will be Vijender's 13th professional bout and his fifth in India, following successes in New Delhi, Mumbai and Jaipur. The Indian legend is undergoing rigorous training for the past one month and is raring to go.

IOS Boxing has been instrumental in bringing professional boxing in India and has successfully conducted four fights, including two in New Delhi, one in Mumbai and Jaipur each. Now, Neerav Tomar, promoter IOS Boxing Promotions, plans to deliver another stupendous sporting event for boxing fans in the country.

Commenting on his fight Vijender said, "I am really excited to return to the ring. I am pumped up and eager as ever to enter the ring again and have been training hard to keep myself fit for the bout. The opponent doesn't really matter as I am focused to extend my unbeaten streak."

On Vijender's upcoming bout, Neerav Tomar said, "This will be a great opportunity for the Indian fans to witness a professional boxing event being organised locally. The COVID-19 pandemic gave us ample time to invest our thoughts on doing something different this time and increasing the level of professional boxing in India. We hope all the fans watching or present at the venue will thoroughly enjoy the event."

IPL Auction 2021: Here’s the full list of all teams with available slots and remaining purse 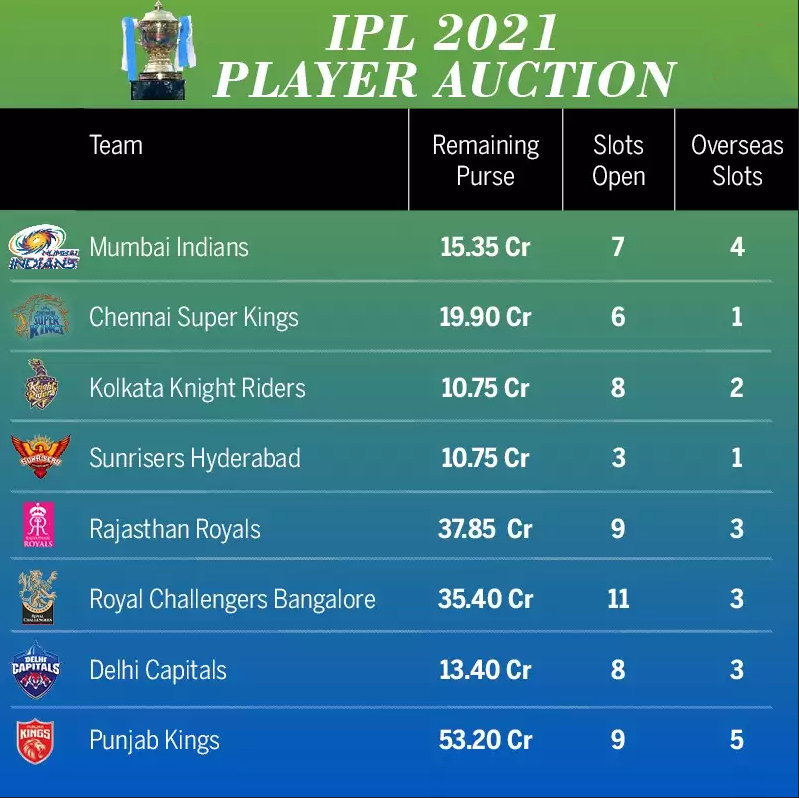 The IPL 2021 auction will be held in Chennai on Thursday (Feb 18, 2021) and a total of 292 players will go under the hammer. There are some big international and Indian names in the list and it will be interesting to see how the teams react when some of the big names, released by the franchisees, are called out.

Kings XI Punjab, who will now be called as Punjab Kings, have the biggest purse and will rejig the line-up again. RCB too went for the jugular despite a play-offs finish last season.

CSK too will be looking to make some big buys to start afresh. Here is a look at how the 8 franchises are placed in terms of purse and slots left.

Kings XI Punjab were on Wednesday renamed as Punjab Kings ahead of the 2021 IPL auction on Thursday in Chennai. A new logo was also unveiled on Wednesday.

Speaking about the new brand identity, team CEO Satish Menon said: "Punjab Kings is a more evolved brand name, and we understand it was a right time for us to move focus on the core brand itself."

"The change in brand identity is not about changing our brand ethos but celebrating our one-ness as we stand in unity like a family. The new logo honors the liveliness and vibrancy of the brand and provides modern elements, while we stand out from the rest of the teams."

Thought he must be joking: Tewatia when Chahal broke news of India call-up Mumbai, Feb 22: Rahul Tewatia was told that he had been selected for the Indian team by his Haryana teammate Yuzvendra Chahal and the all-rounder wondered whether to take the news seriously at first. Tewatia, Ishan Kishan and Suryakumar Yadav all received call-ups to the Indian T20I team that will face England in five matches starting on March 12.

"When Yuzi bhai (Chahal) informed me, my first reaction was that he must be joking. I never thought I would get picked now. Mohit bhaiya (Sharma) also came to my room to inform me," Tewatia told The Indian Express.

Tewatia said that he knew he had to make most of his chances whenever he got them as Haryana has three spinners who have played for India.

"Life has always thrown challenges. Haryana has three spinners who have already played for India; Amit Mishra, Chahal and Jayant Yadav. I always knew that if I get an opportunity, I must make it count. People had noticed me after the IPL. I thought if I continue to do well, I could get picked for the Indian team," he added.

The five-match T20I series will be played entirely at the Sardar Patel stadium in Motera and ends on March 20. This will be followed by an ODI series of three matches in Pune from March 23 to 28.

Opener Rohit Sharma may be under pressure to perform Chennai, Feb 13: Though India skipper Virat Kohli had confirmed prior to the first Test that both Rohit Sharma and Shubman Gill would be persisted with throughout the series, the former is likely to be under pressure when India take on England in the second Test at the MA Chidambaram Stadium from Saturday.

Sharma's poor run of scores has reflected in India's poor opening starts. When he joined the playing XI for the third Test in Sydney, India seemed to have found a solution as he and Gill provided 70 and 71-run starts to the team. India had until his comeback had been struggling to muster up proper opening partnerships -- 16, 27, 30, 8, 0, 7, 0, 16.

But after stands of 70 and 71 with Gill, there was nothing worth of note over the next four innings across two Tests. The two put on 11 and 18 in the fourth and final Test vs Australia at the Gabba, and 19 and 25 in the first Test against England in Chennai last week.

Worse is that Sharma has thrown his wicket away after being settled. In the first innings in Brisbane, he looked good at 44 but holed out to long-on off the bowling of Nathan Lyon on what was an irresponsible shot.

He was unlucky to get good deliveries on both occasions in the last Test but with India looking to square the series and desperate to avoid defeat -- a loss would mean they will be out of race of World Test Championship final, Sharma will have to up his game.

India could try someone else like Washington Sundar to open and push Sharma down too. Or the host may bring in Mayank Agarwal who is in the squad and who Sharma had replaced after the second Test in Australia.

"Rohit is an important member of our team. A big score doesn't mean you have to make 100 or 150. In Australia he batted well, made important contributions. See if someone has one off-day, plays 3-4 bad innings, it doesn't mean that he is a bad player. You have to back your player," Rahane told the media on Thursday.

"Rohit is a player who has won us many matches in the past. You can't judge a player in 1-2 matches or 4-6 innings. You know that someone like Rohit, if he gets set, he goes on to play a big innings. He can win matches for you. So it is all about having faith in that particular player. As I said Rohit is an important member of our team. Really happy to have him," he added.