Mangaluru: ‘Team B-Human’, a city based charity organisation, has donated Rs 1 lakh for the treatment of the a three-year-old child from Kinya on the outskirts of the city, who had sustained severe burn injuries. 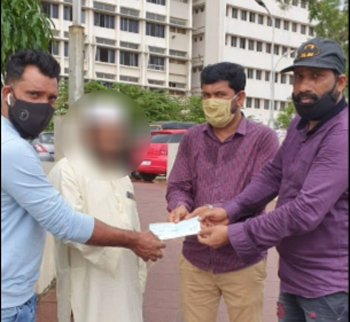 According to the reports, a cleric at the Kodaje Badriya Juma Masjid, was living in hardship with his wife and two kids and had to recently avail loan to repair his house which was severely damaged due to storm.

To add to his woes, his three-year old son sustained 80% burn injuries after hot water fell on him accidentally. The child is currently receiving treatment at a private hospital in Derlakatte. The child’s brother is battling kidney related ailment.

A fundraising campaign was recently run on local social media platforms to help the cleric in sustaining in the hardship and to raise fund for the treatment of his son.

Taking note of the viral messages on social media, ‘Team B-Human’ came to the rescue of cleric and donated Rs 1 lakh.

‘Team B-Human’ has also arranged Rs. 70 thousand from its well-wishers which will also be deposited to cleric’s account soon. ‘Team B-Human’ in a release added that it will take care of Batish until he is discharged from the hospital post-treatment.

Founder of ‘Team B-Human’, Asif Deals, members Basha, Althaf, Sadiq, Shameem and others were present when the cheque of Rs. one lakh was handed over to the cleric.

Madikeri, Jul 24: Water from river Cauvery, which is deemed as holy, and mud from Kodagu, the birth district of river Cauvery was collected and will be sent to Ayodhya for use during groundbreaking (Bhoomi Pooja) ceremony for the construction of Ram Mandir on August 5.

Special pooja was offered at Talacauvery, praying for the timely completion of the Ram Mandir in Ayodhya.